When I awoke in my room on the Trinchera Pass Friday morning December 1st we were parked in BNSF’s Flynn Yard just south of Oklahoma City.  I closed the blinds, cleaned up and got dressed to have breakfast in the crew dining car Fred Harvey at 8:30 am.  After a great buffet breakfast we had a staff meeting to plan for the afternoon event at the old AT&SF passenger station downtown where we would once again host a 90-minute train ride for invited military families.

Before I go further here is the front of the brochure handed out to all guests as they boarded for each event. 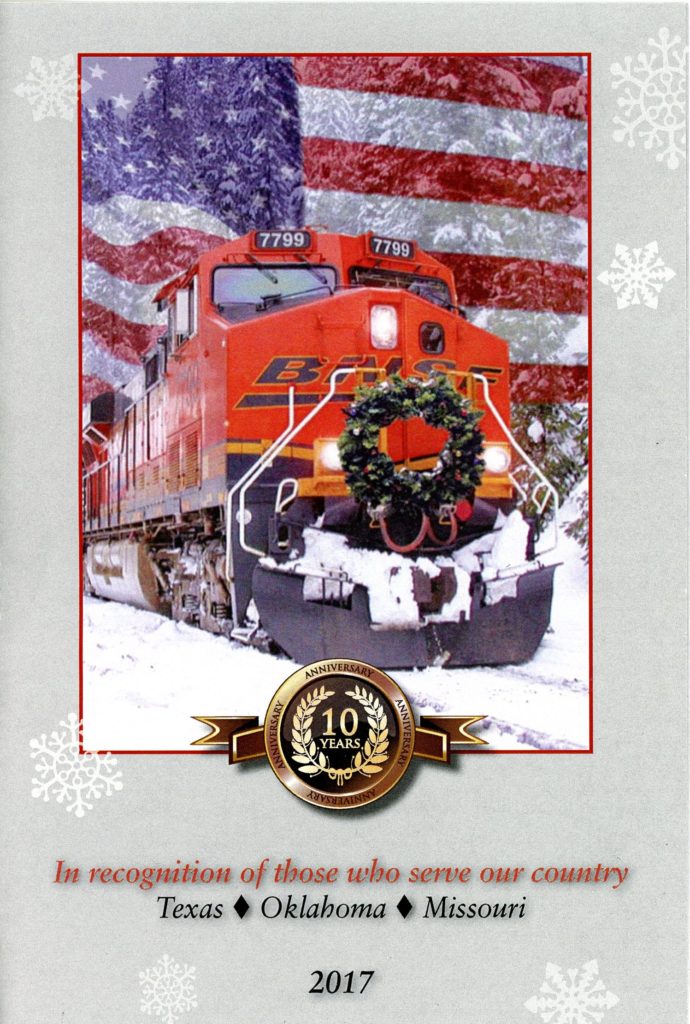 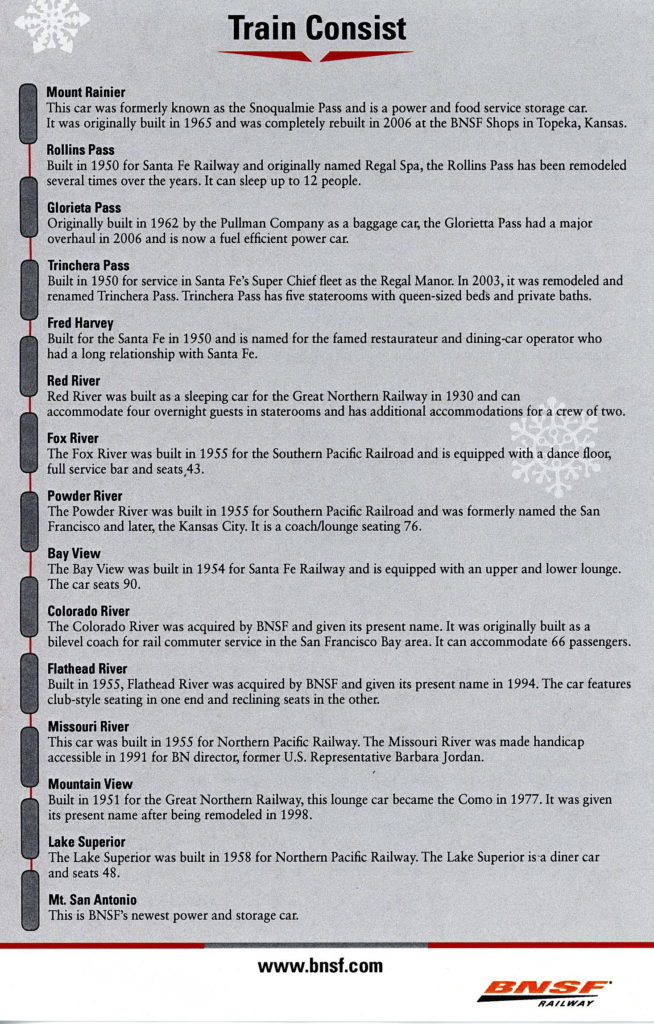 After the staff meeting I returned to my room to organize my equipment and personal items.  Along the way I stopped in a vestibule for this photo of GP38-2 #2329 and GP40X #3036  parked on the east side of our train. 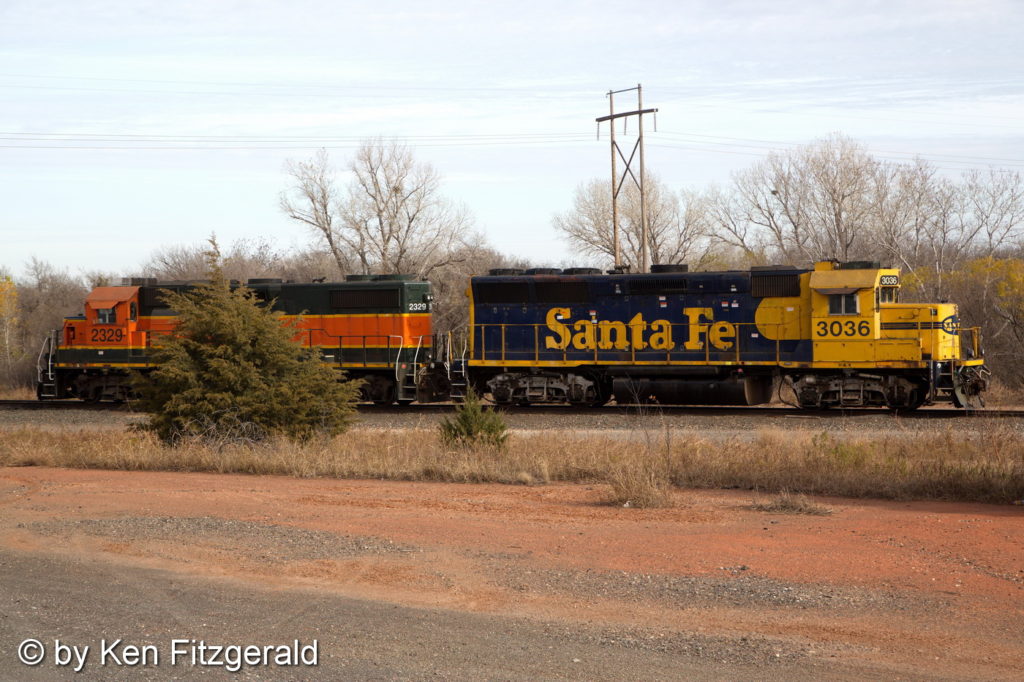 When I said in the previous entry that I had gone home to quickly pack for the trip, by “pack” I meant rapidly throw everything I might need into a suitcase, Pelican camera case and a shoulder bag anticipating an airline flight back home from Kansas City at the end of this trip.  It took a while to get everything organized, and while I worked a switch job drilled the yard tracks on the west side outside my window. 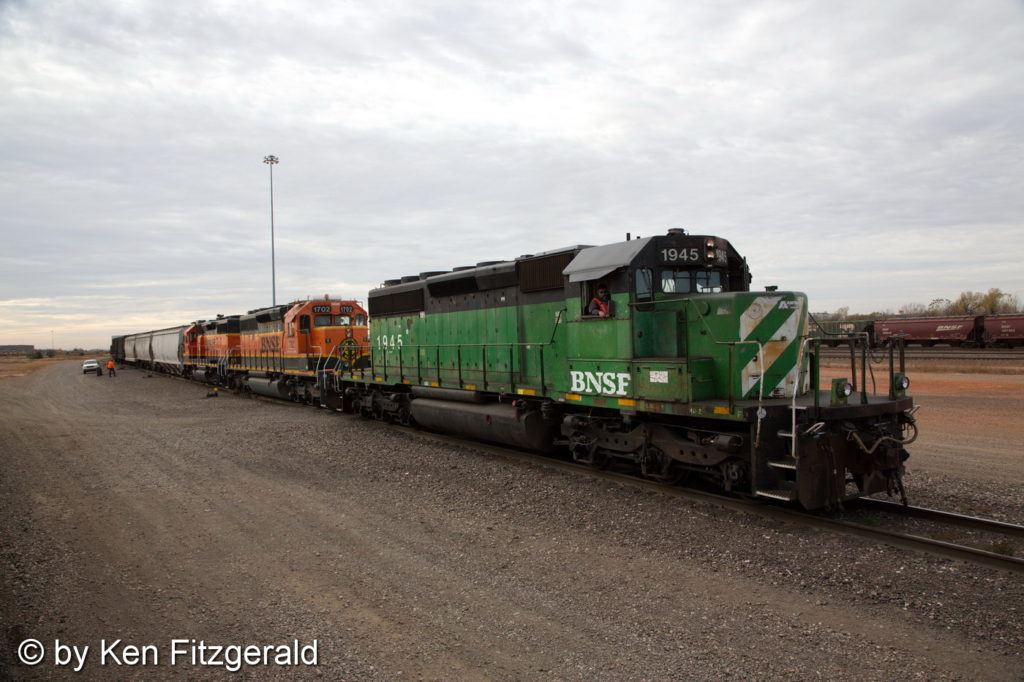 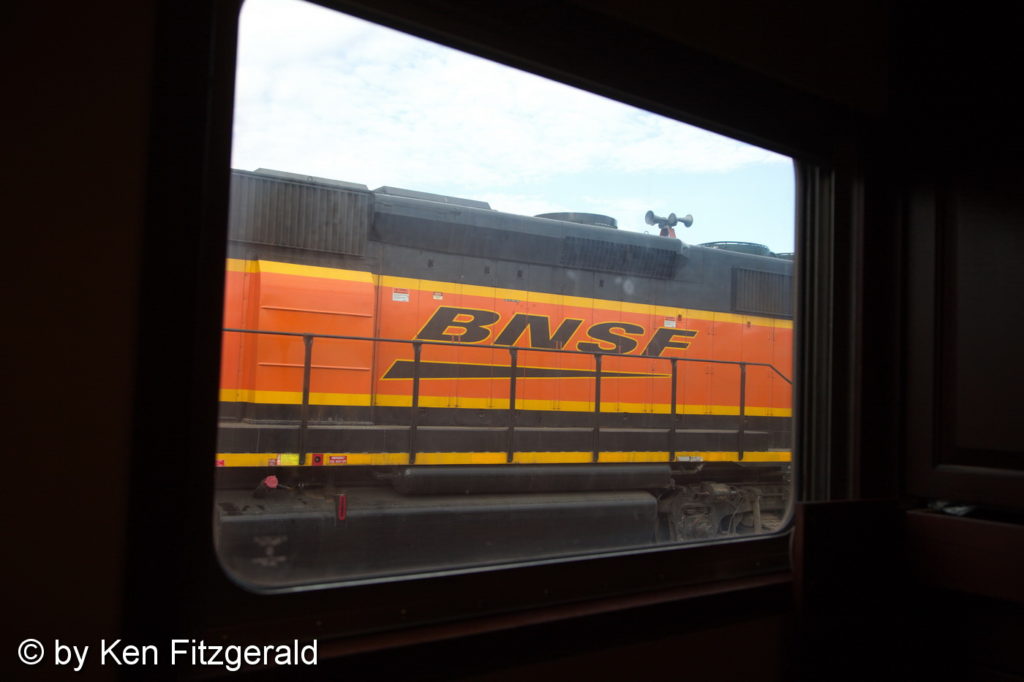 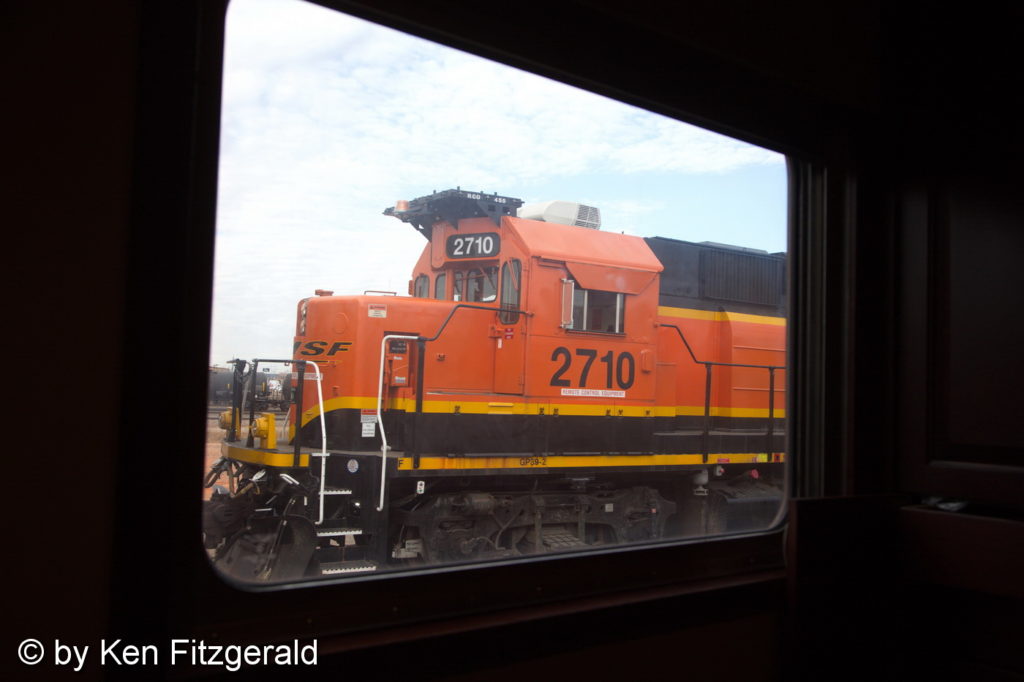 The engineer looked curious as to what was going on next door. 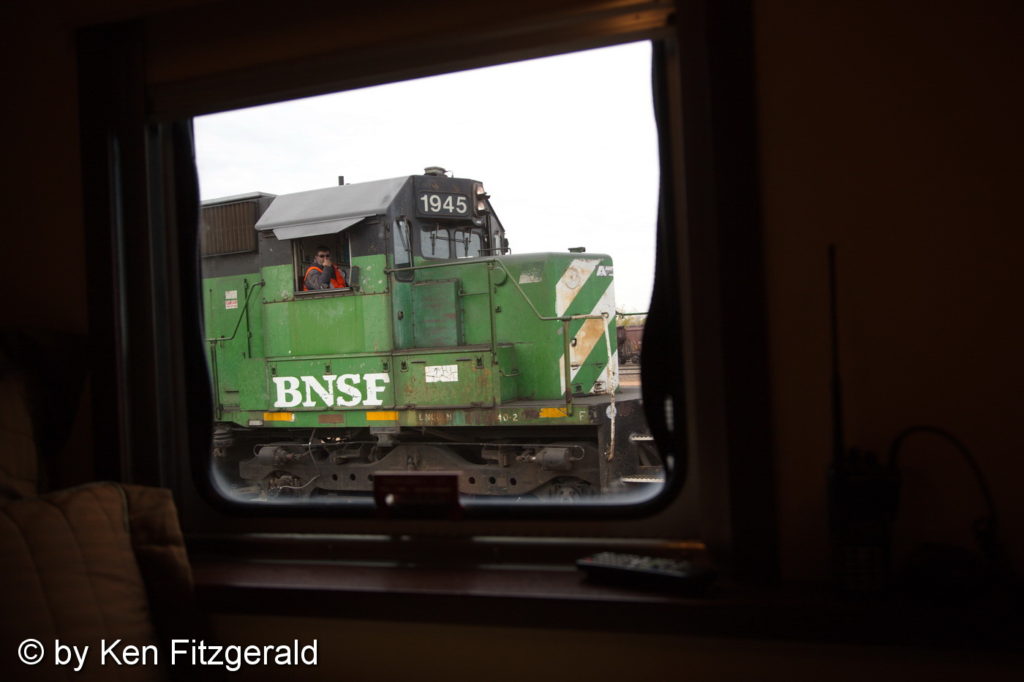 Lunch was at 1:00 pm in the Fred Harvey and then it was back to the room once again for a nap since the previous day was a long one.  At 2:30 pm a crew arrived to move our train to the station and by 2:55 pm we were departing Flynn Yard as seen from the dome level of the Bay View. 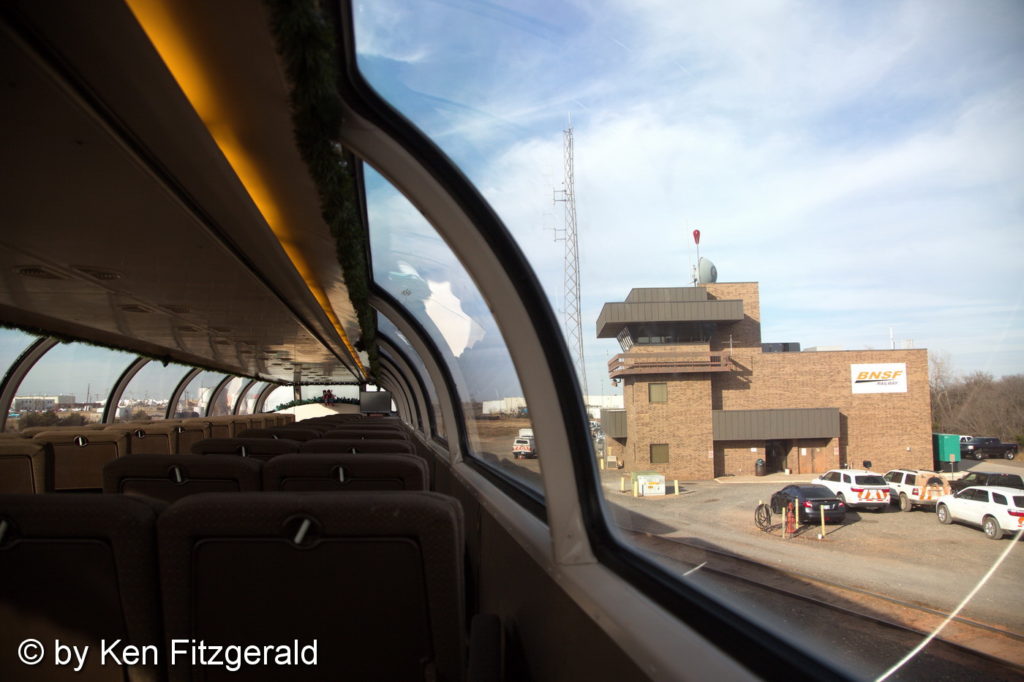 To show just how far I go back at this location here is an official AT&SF photo I took from this same yard tower back in 1981 not long after the facility was opened for business. 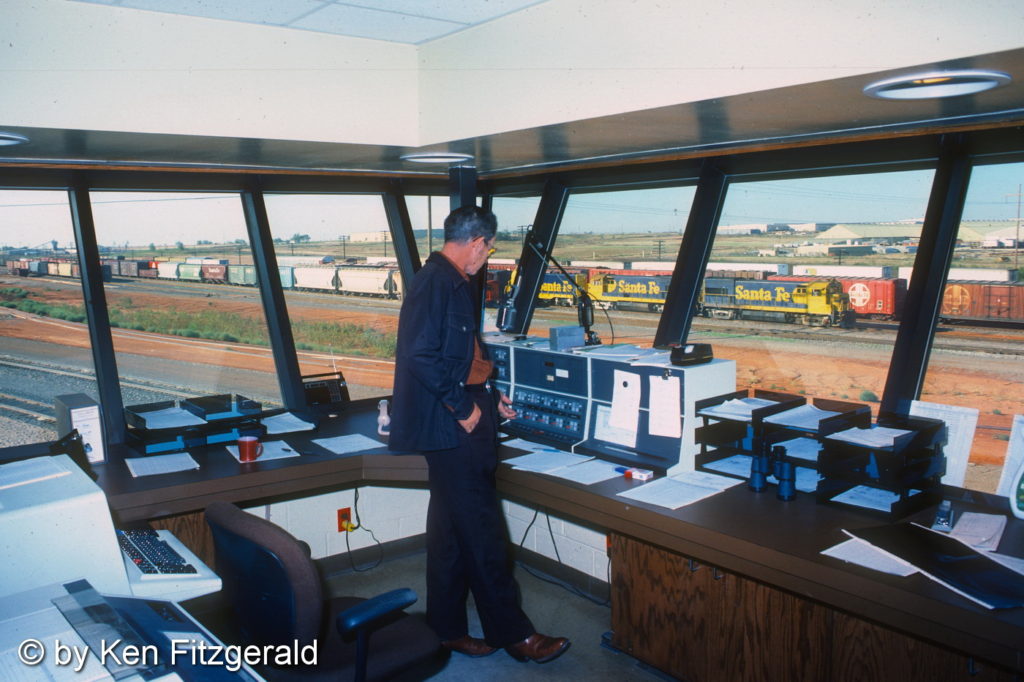 After crossing over I240 we curved to the west and I captured this view looking forward from the other side of the dome. 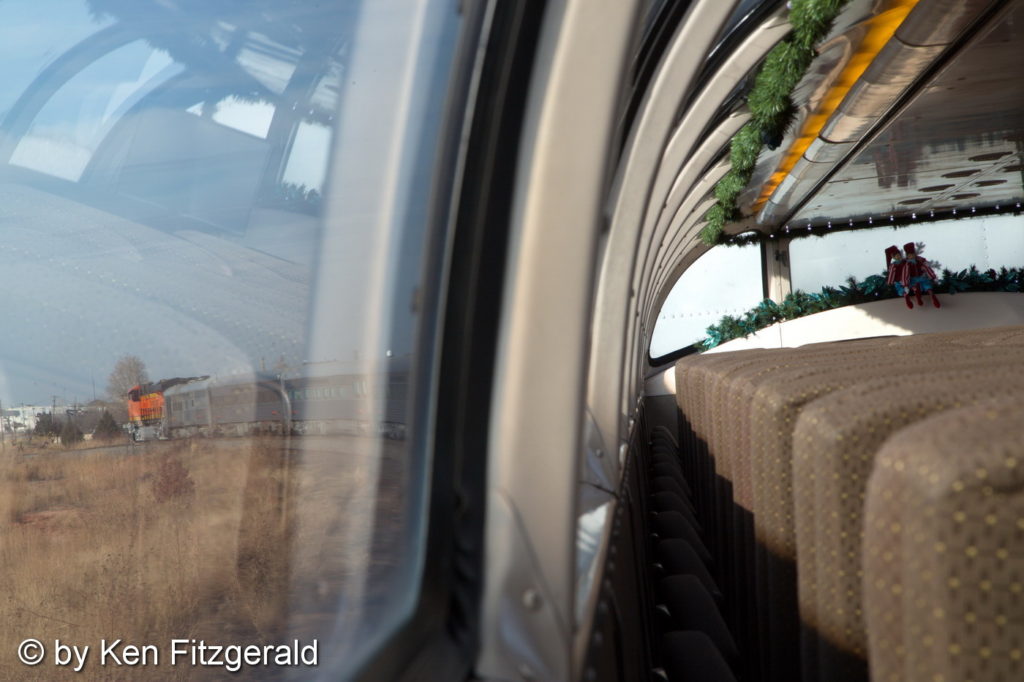 At Burnett we had a rolling meet with a southbound intermodal train. 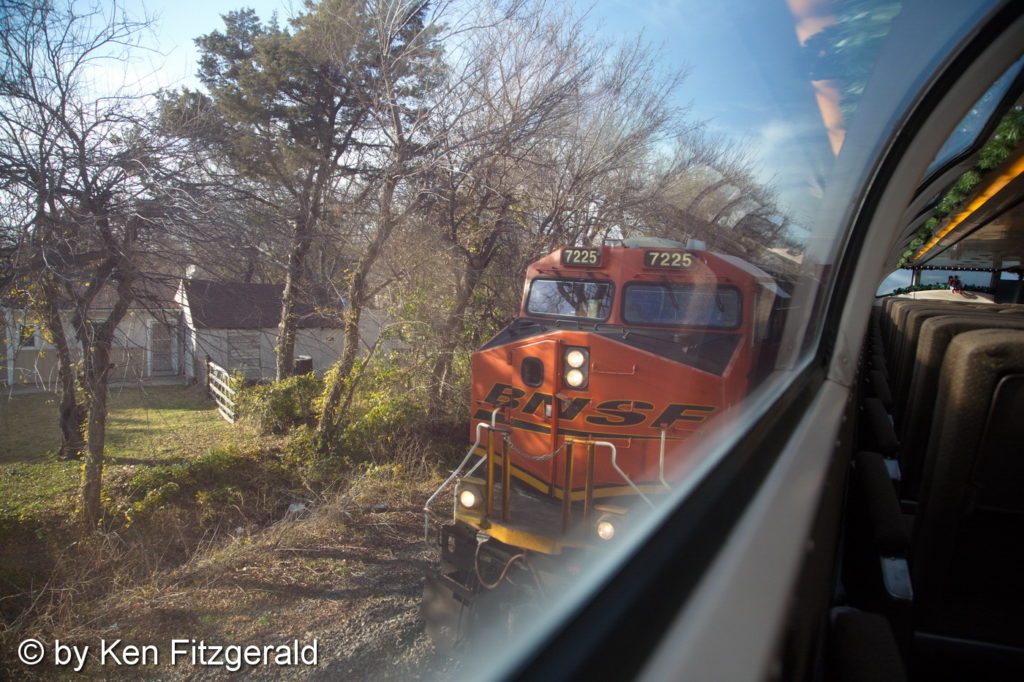 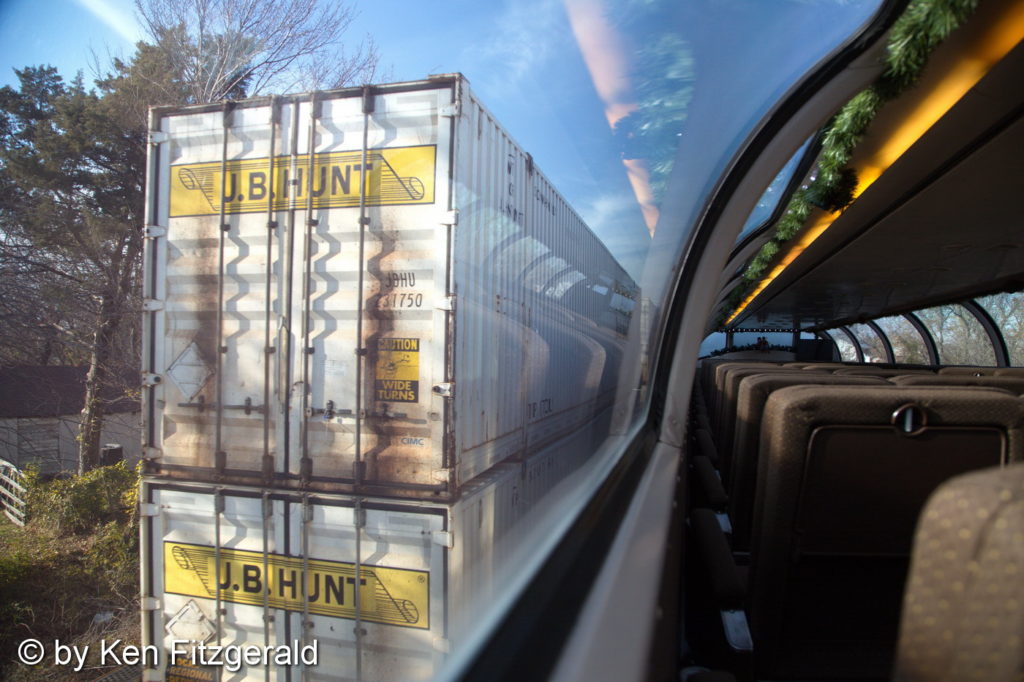 Just north of CP River a southbound grain train was tied down on the other main track. 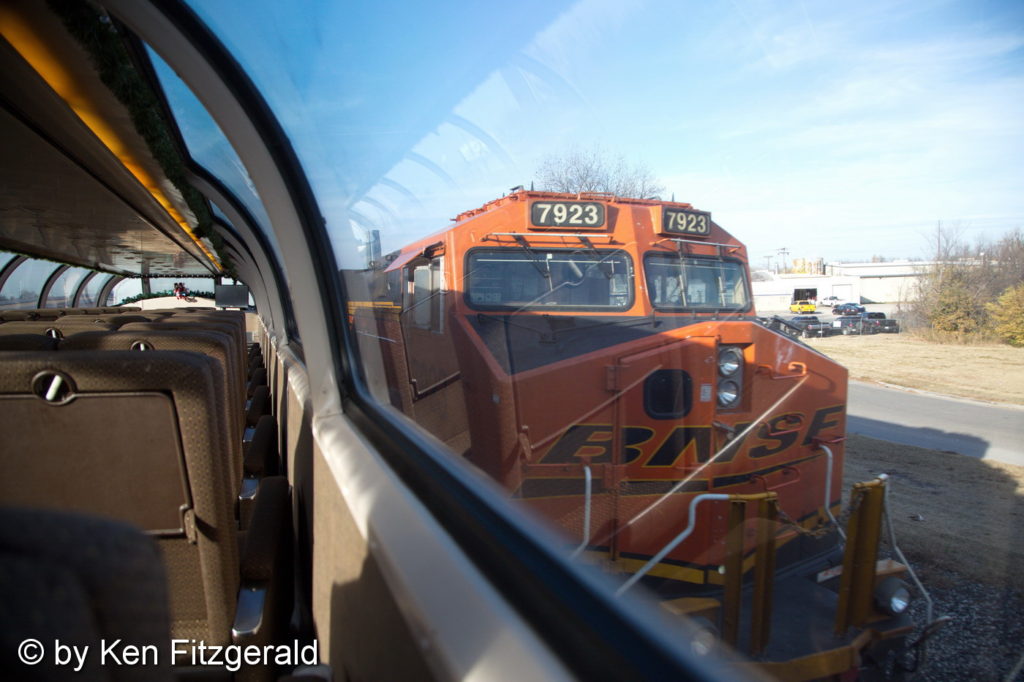 Here we are crossing the Oklahoma River. 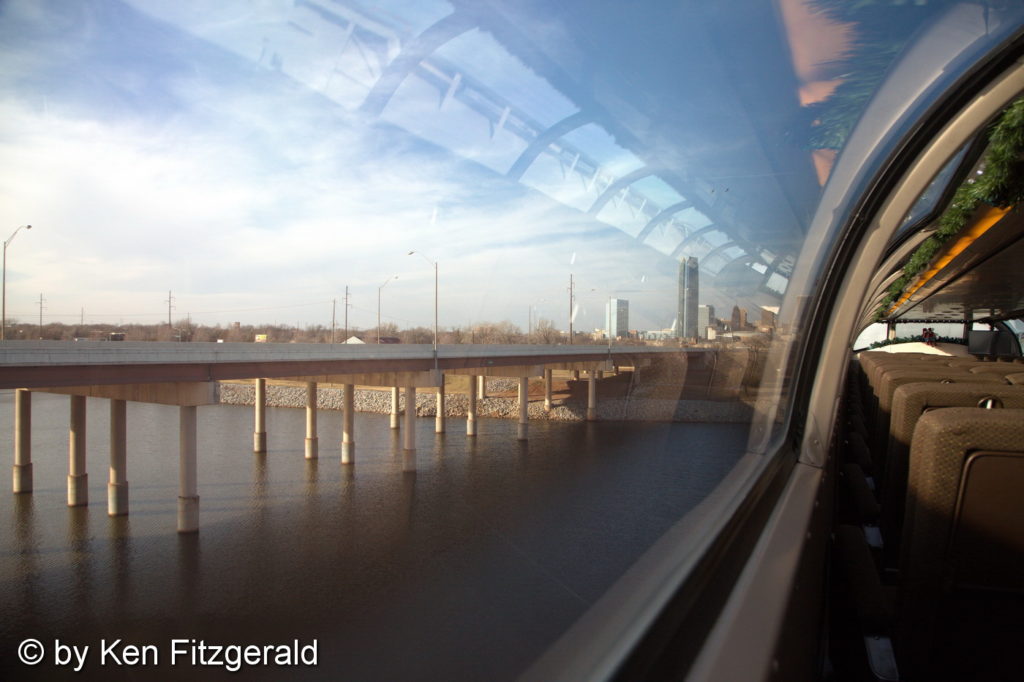 Back in the 1980’s while in the company of a local official I climbed a signal mast with permission for this view of a Santa Fe F45 southbound with the skyline in the background. 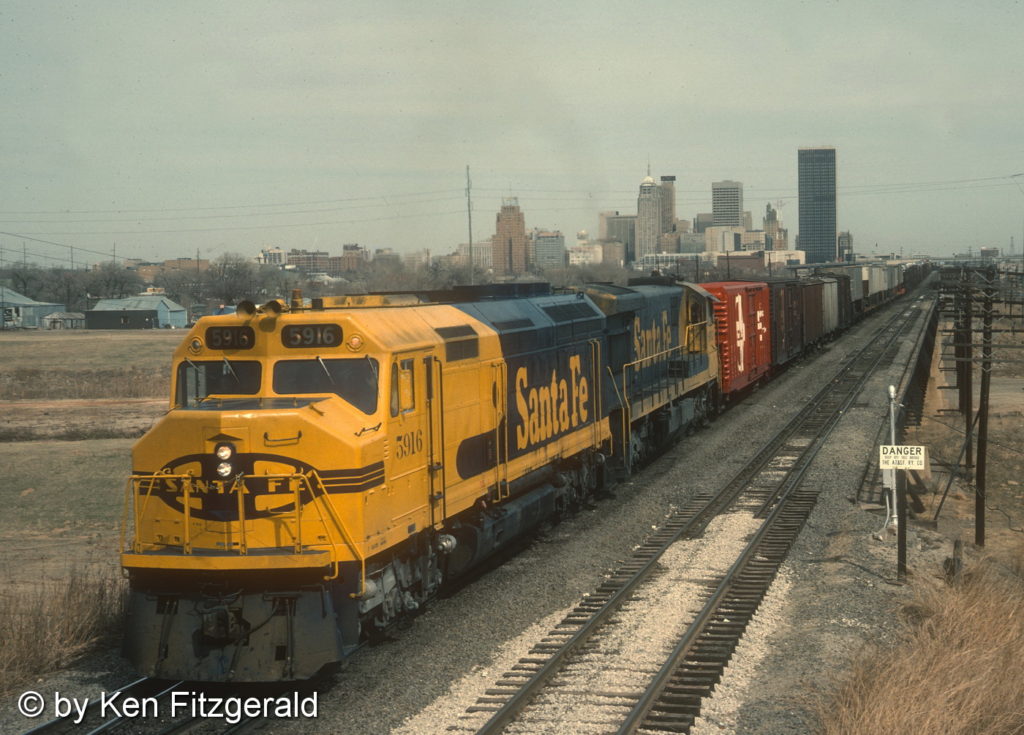 More than 35 years later our train approached an upgraded downtown. 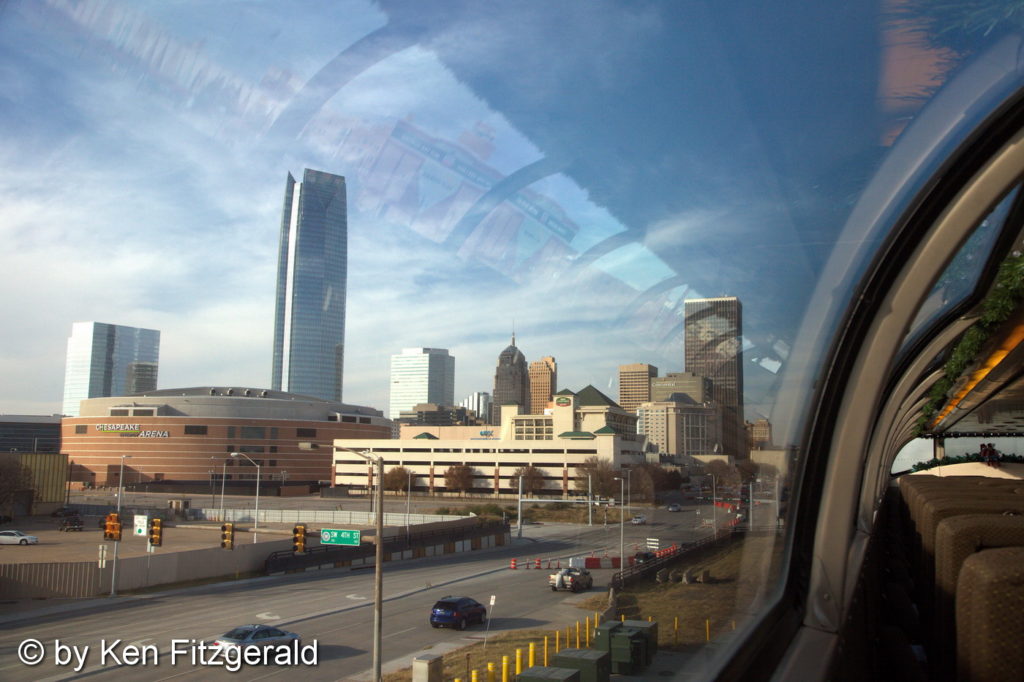 Back in the 1980’s time machine, here is Amtrak Train 15 the Lone Star led by two SDP40F’s making a station stop. 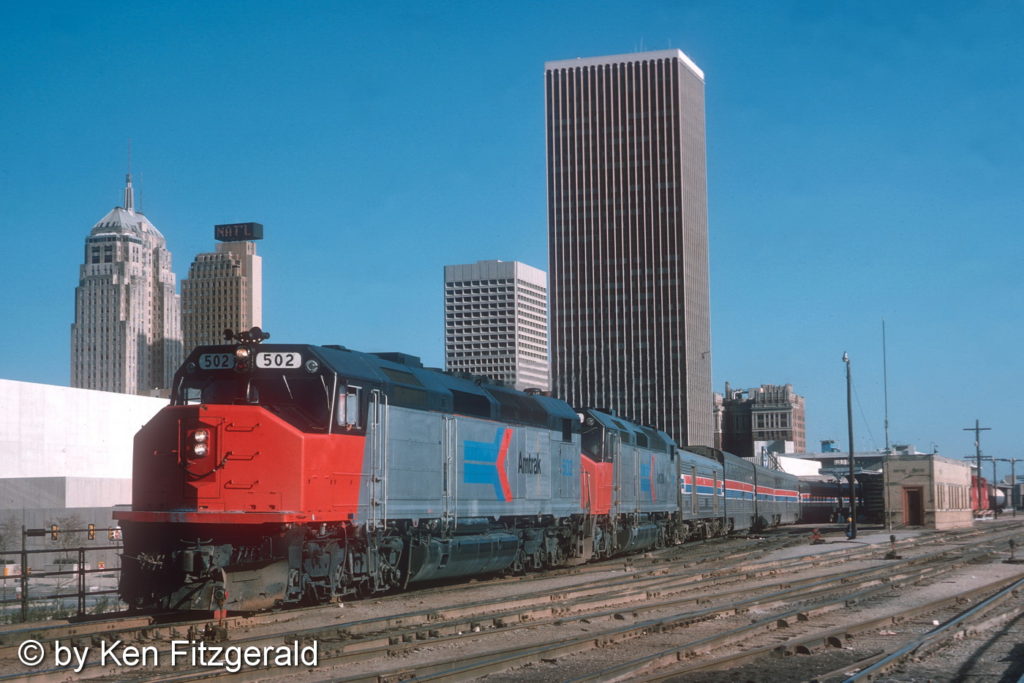 We backed into the Amtrak station spur from the north end since it is no longer a through track.  I walked down to the south end of the train to capture this view of the 6616 with the depot. 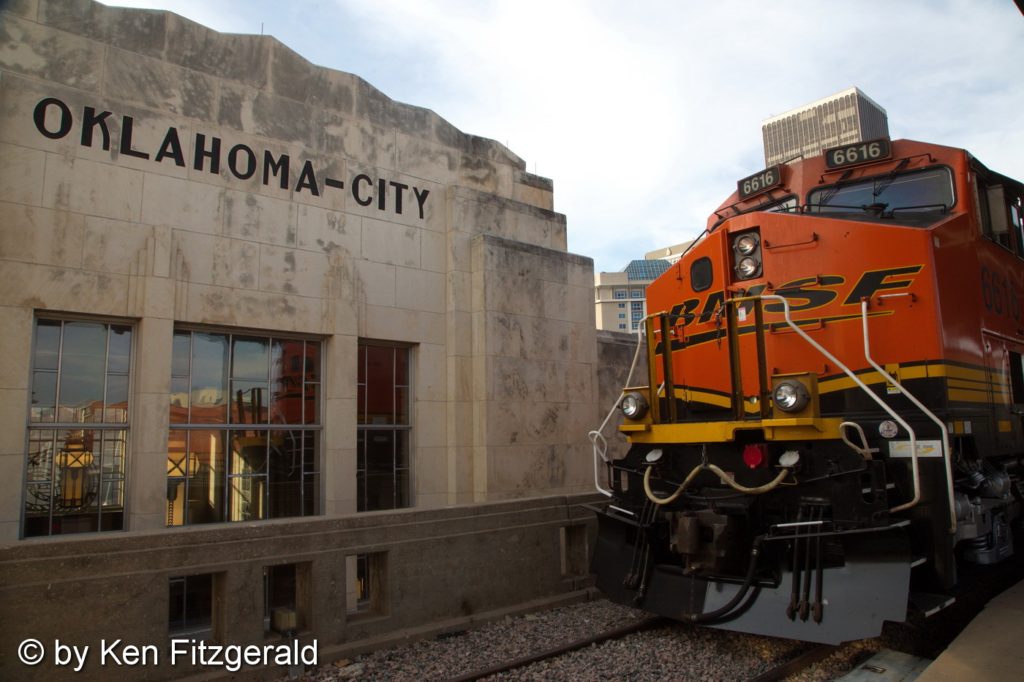 Walking back to the boarding area I recorded this view of a southbound ethanol train passing the west side of the Bricktown entertainment district. 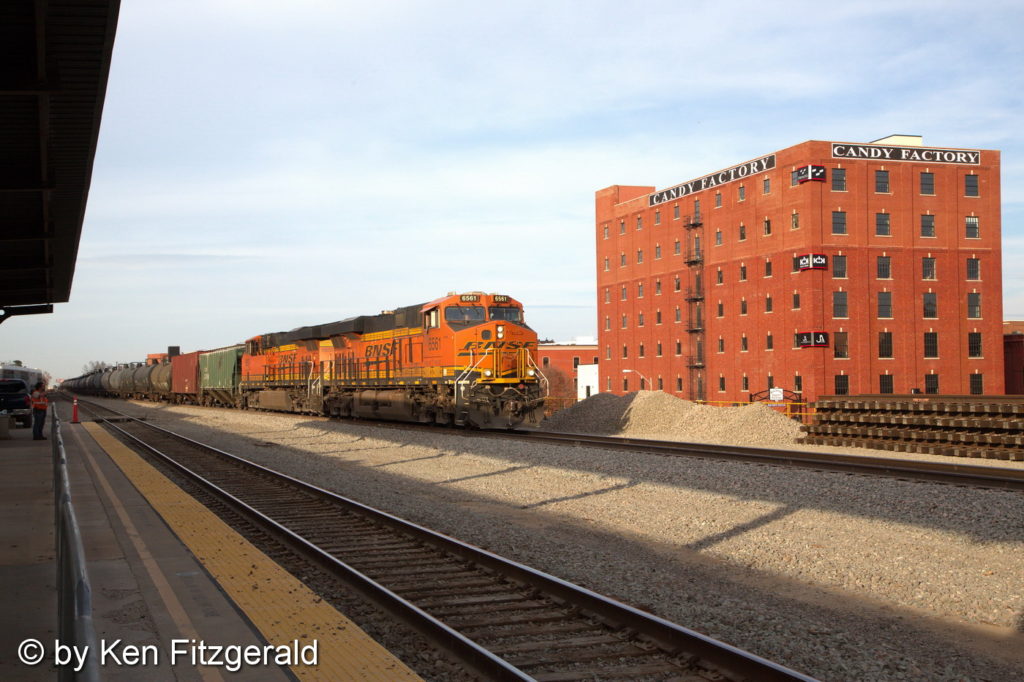 After boarding our roughly 350 passengers we left the station heading north towards Guthrie.  Mr. and Mrs. Claus along with the lead elf and I worked our way through the train and I started to settle into the routine after last night’s session.  In the third car we came across a face very familiar to me.  On the right in the photo below is old railfan/model railroader friend Greg Hall.  On the left side of Santa Claus is Eric Dillbeck, President of the Oklahoma Railway Museum. 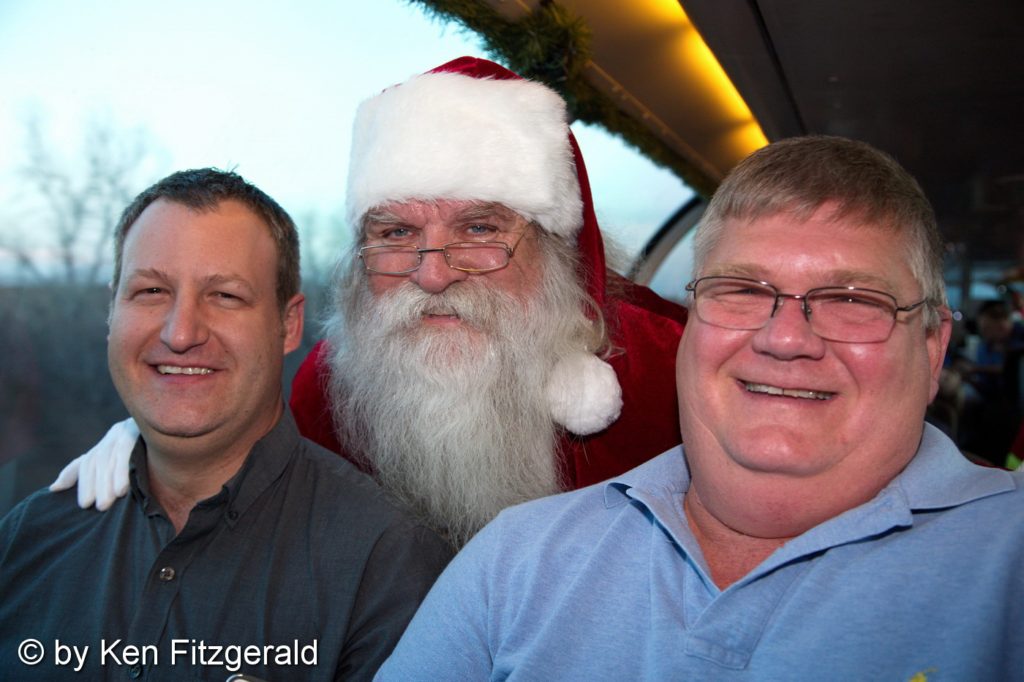 One way to answer the question of how long Greg and I have known each other is to just look at the next photo.  Greg in his teens is on the left below…… 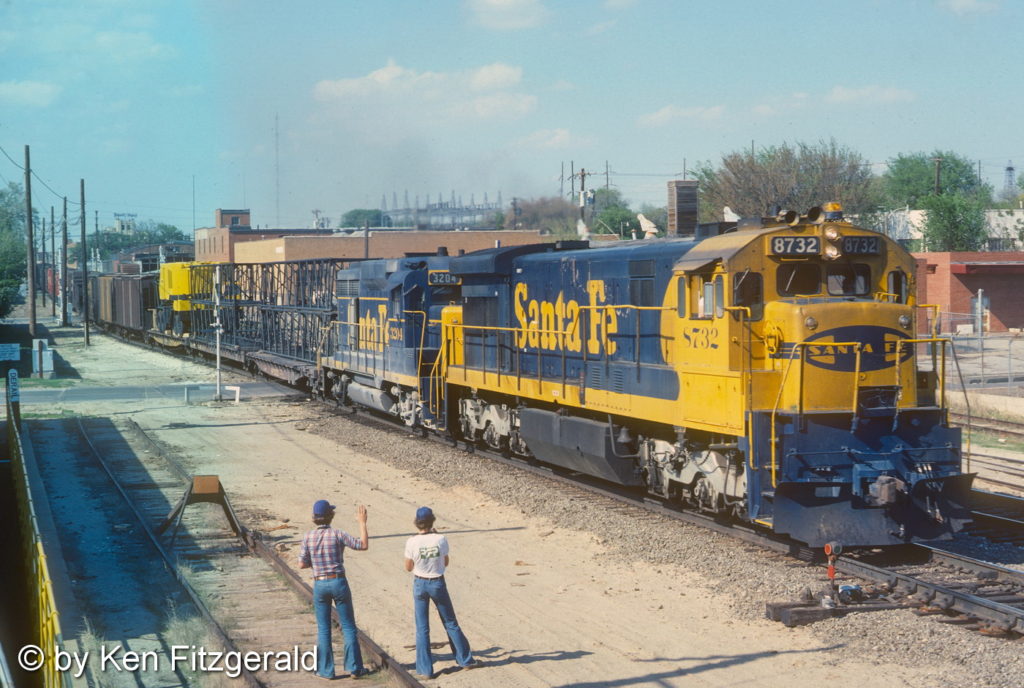 Back to business!  Here is our entourage as we enter the lounge car Mountain View near the end of our quest to make it through all the cars before we arrive back at the depot. 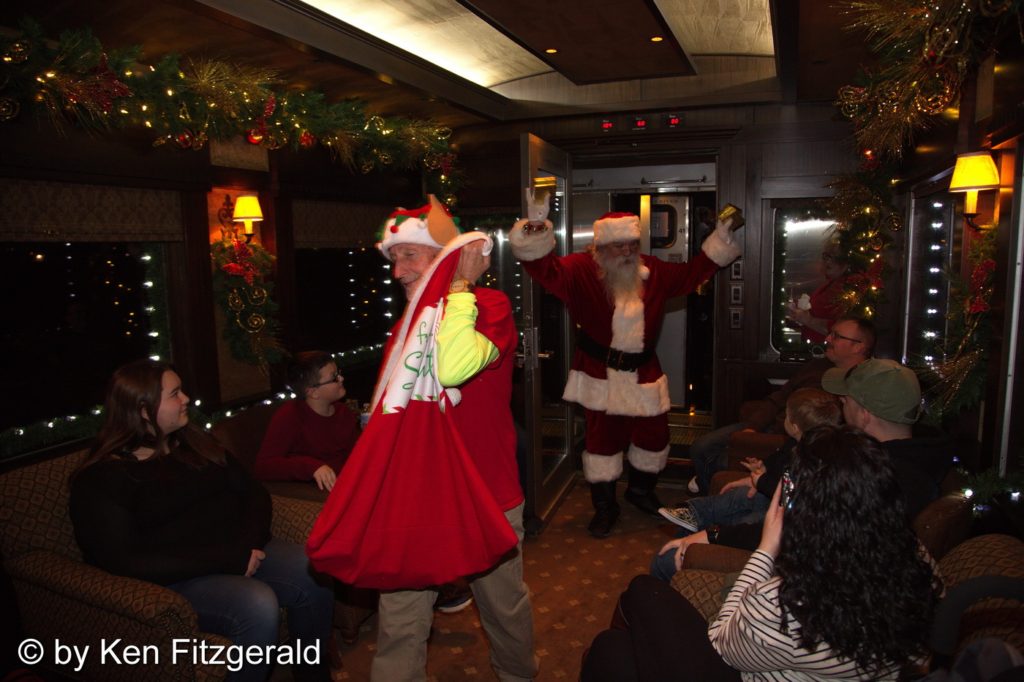 Later on after we finished up the family photos with Santa outside the train we honored our engineer for the evening David Townsend who will be retiring in January 2018.  Can you guess what railroad David worked for before the BNSF merger? 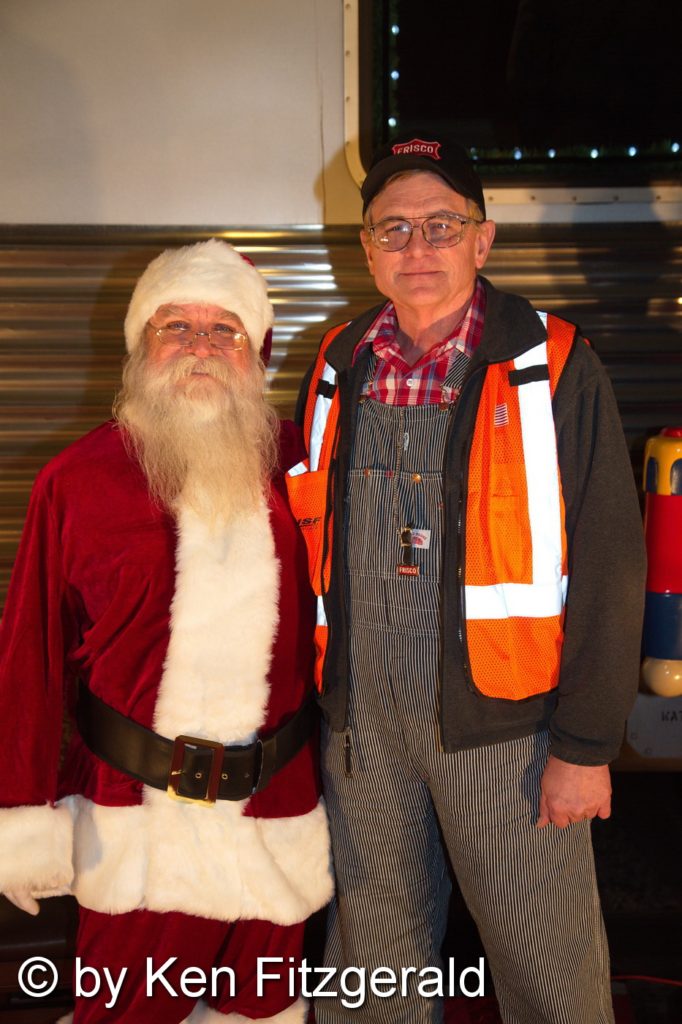 This night I had the option of going back to my room to do the nightly routine of process then upload. I had all this done by the time the train was once again approaching Guthrie, this time on our overnight ferry move to Springfield, Missouri.  Check back for Part III in the next day or so!

A Brief Visit on Sunday Morning