In the photographic sense, familiar places close to home can become monotonous if you keep shooting the exact same angles over and over and you are looking for more than roster shots.  One of the things that can add variety to a place you visit frequently is the weather.  I spend a lot of time around the Aledo area and the siding at Iona just west of Fort Worth on the UP’s Baird Sub because it is less than ten minutes from the house.  This past Saturday I left the house early intending on catching the sunrise at Iona before heading on to Hodge Yard to take photos for the FWWR.  The sky was clear when I left the house at 6:30am, but just four miles northeast at the west switch at Iona I encountered a thick fog and then an eastbound intermodal train stopped on the main with a single SD70Ace on the rear in DPU mode.  Visibility was down to less than 300 feet as I drove beside the train to the east end where I parked near the grade crossing.  On the point of the eastbound and barely visible in the fog was brand new UP SD70AH 8838.  The sun was struggling to climb above the fog bank and I could hear the roar about two miles away of a westbound coming up the 1.2% grade towards me. 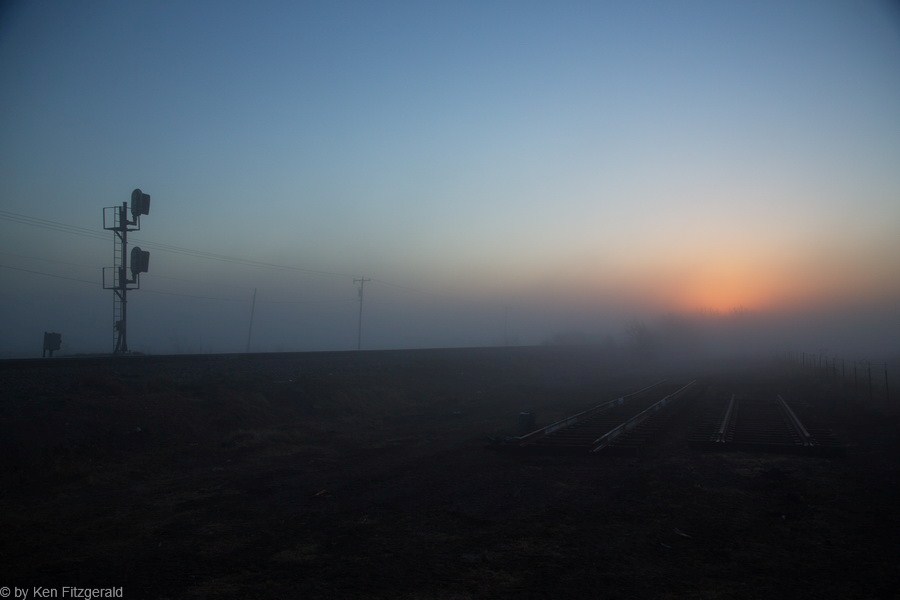 In the foreground work crews have been assembling a new switch and leads to replace the old one here at the east end of Iona.  A few minutes later the headlights of the westbound punched a hole in the increasing fog that now blocked my opportunity for shot of the train with the rising sun in the same frame. 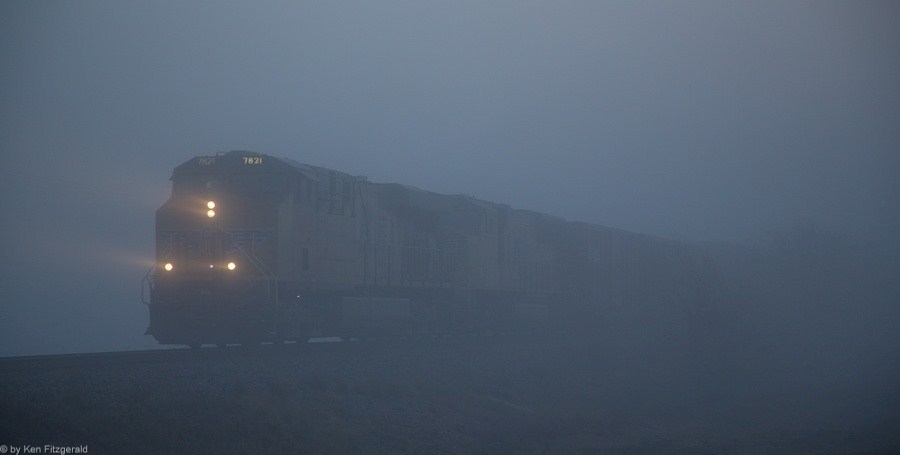 I zoomed out to show the whole scene including the blue skies visible above the layer of fog as the UP 7821 came into view with a second unit and a manifest train in tow. 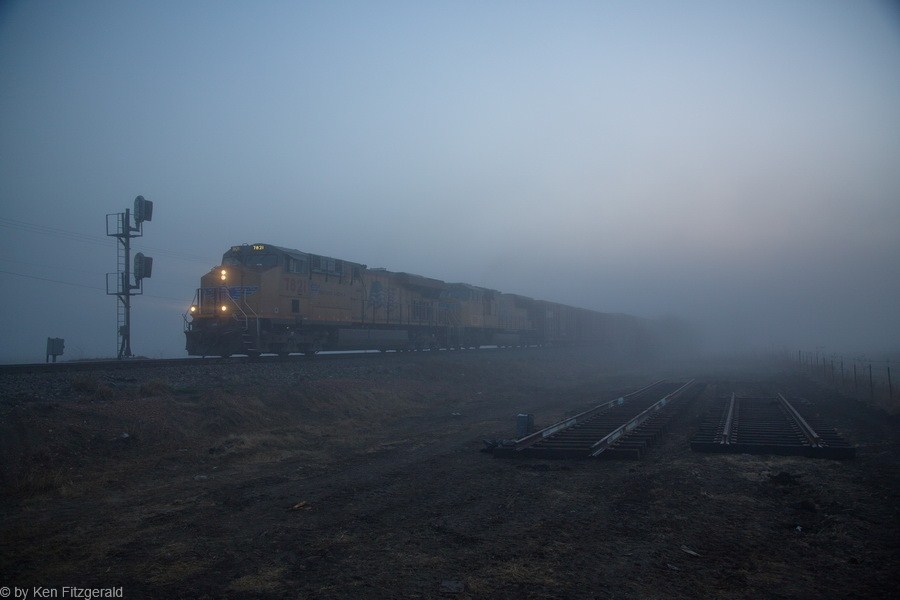 Only a slight glimmer of the UP 8838 East’s headlight was visible as the UP 7821 West headed into the gloom and the siding for the meet. 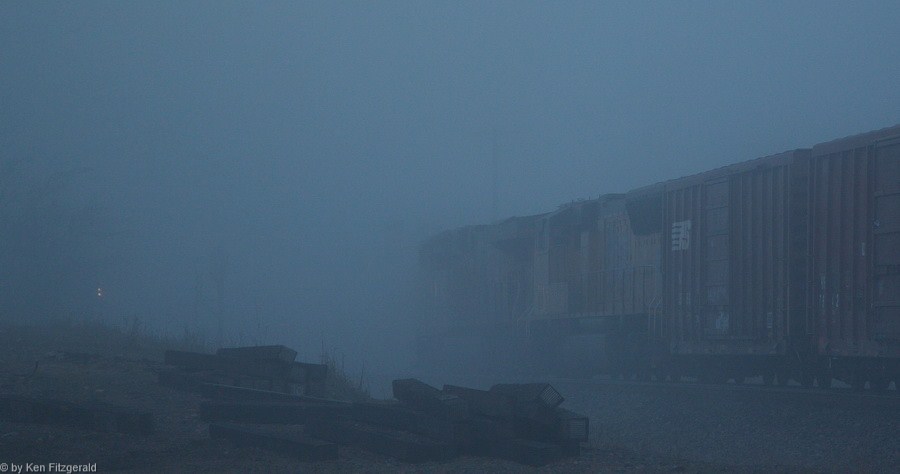 Looking back east towards Fort Worth the crossing signal added a little color to the otherwise gloomy scene. 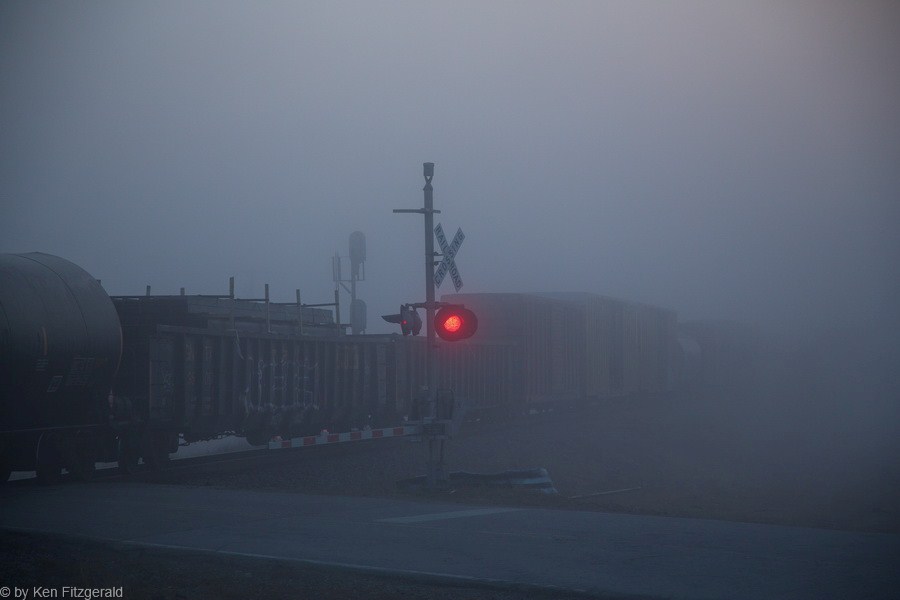 This was one of those close to 10,000-foot manifest trains in a 2 x 2 configuration with two more GE’s pushing hard on the rear to get over the crest of the westbound grade out of Fort Worth. 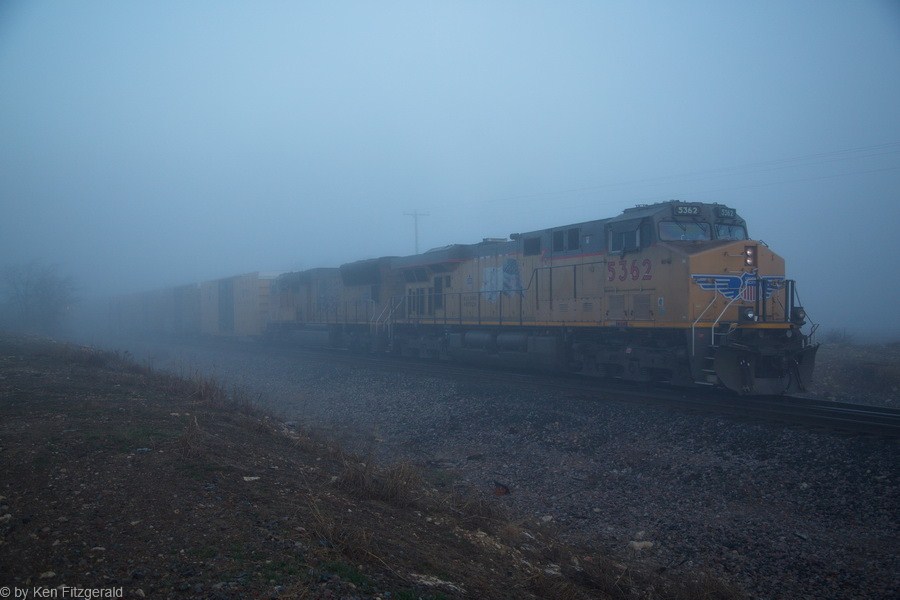 Looking back over my shoulder again the sun was still trying to rise above the ever thickening fog, but the fog was still winning! 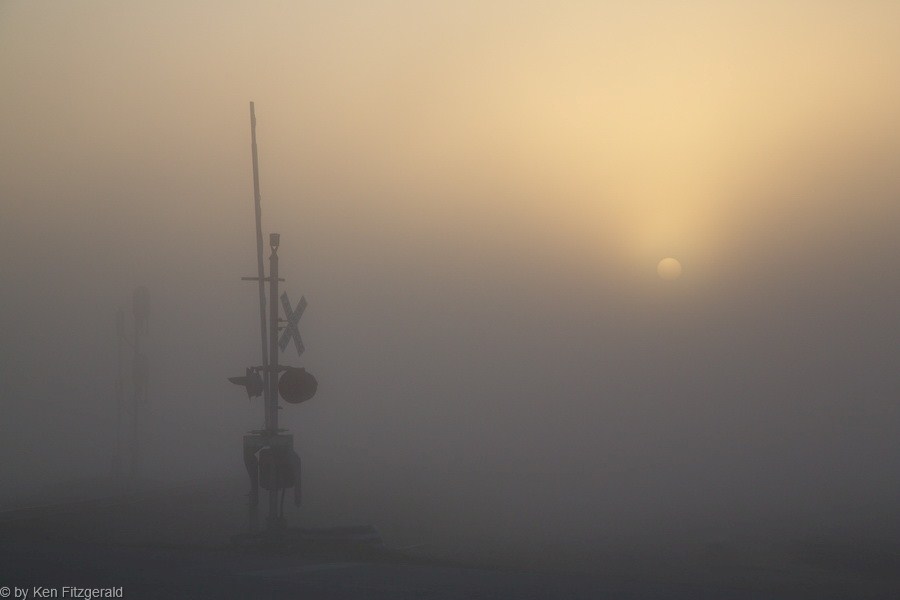 I heard the switch motor roll the points back to the main, and a minute later the UP 8838 East whistled off and started to move downhill towards Fort Worth.  I took a three picture sequence as the train rolled past my vantage point.  I wished I had also been recording sound as each blast of the 8838’s K5LAA was answered by a howling of a pack of coyotes only a few hundred feet away but invisible in the fog. 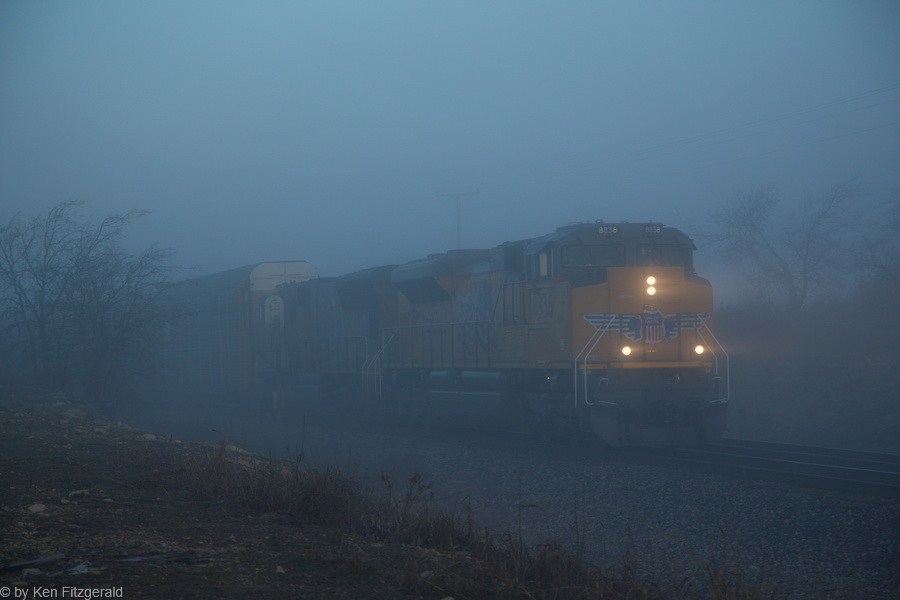 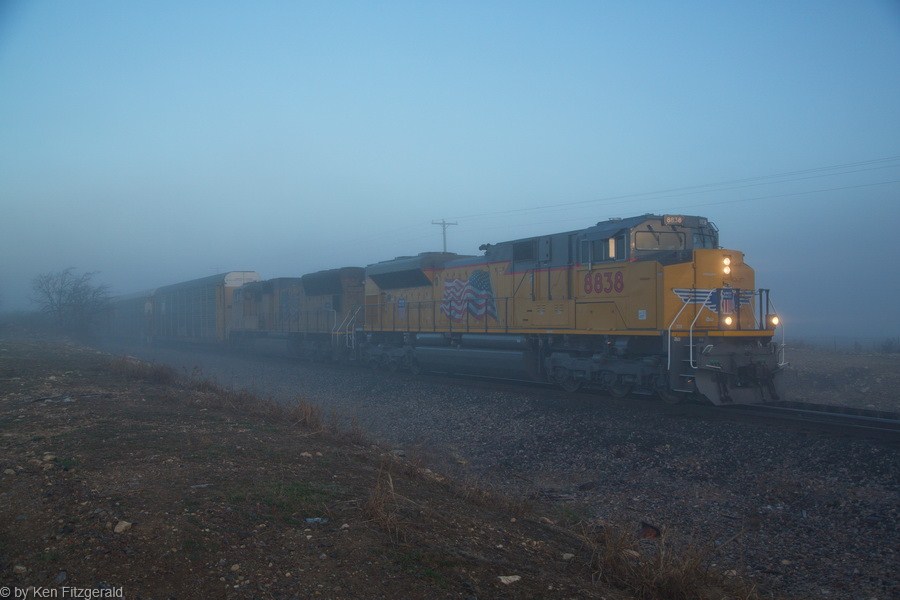 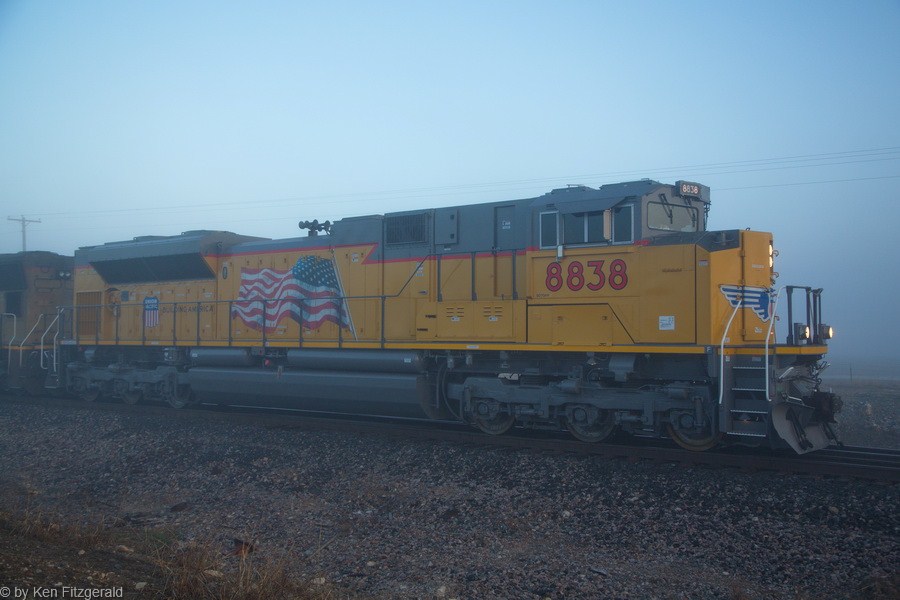 The sun was beginning to win the battle to dominate the eastern morning sky as I turned and grabbed this shot complete with the flashing crossing signal, my personal favorite of the series here. 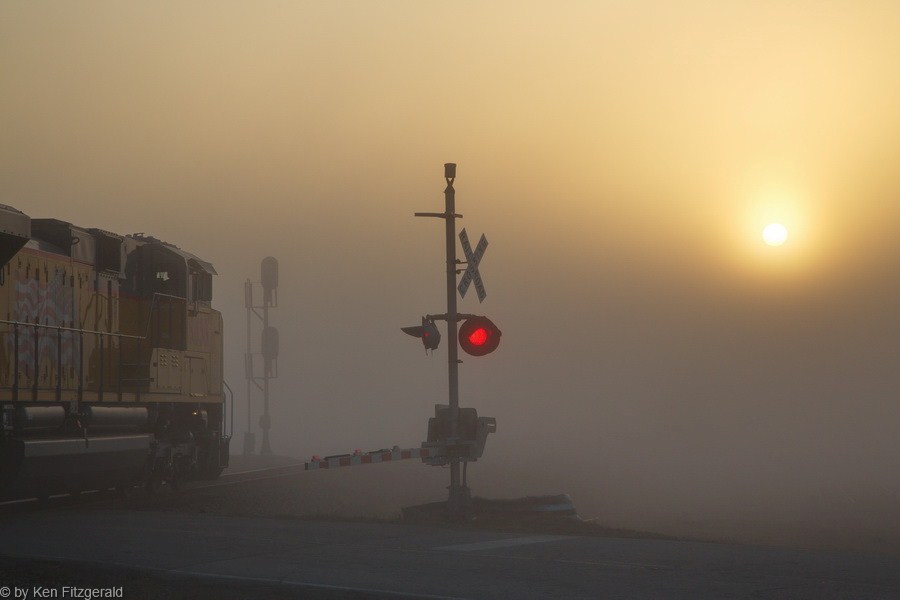 Using the decending grade to its advantage, the eastbound intermodal quickly accelerated to track speed as it raced off the last few miles into Fort Worth and the rising sun. 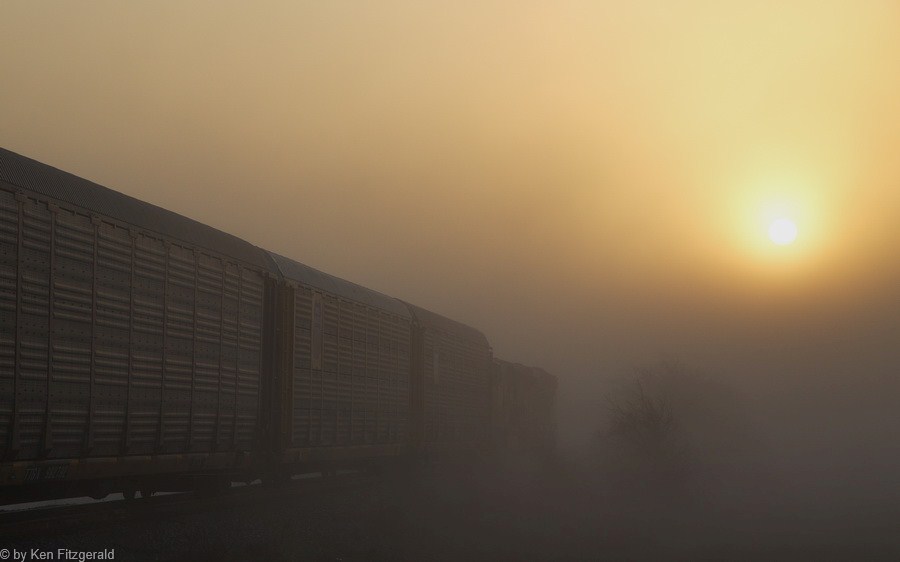 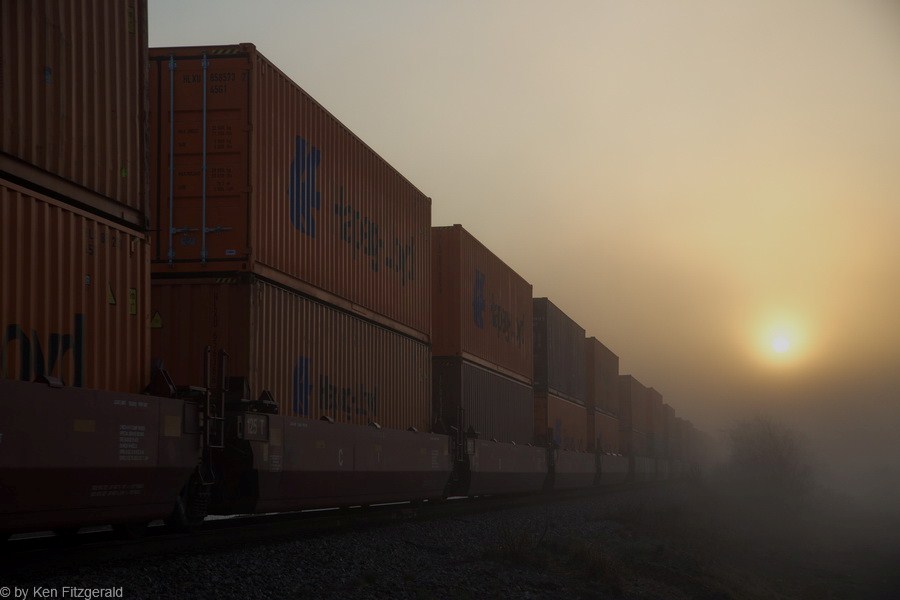 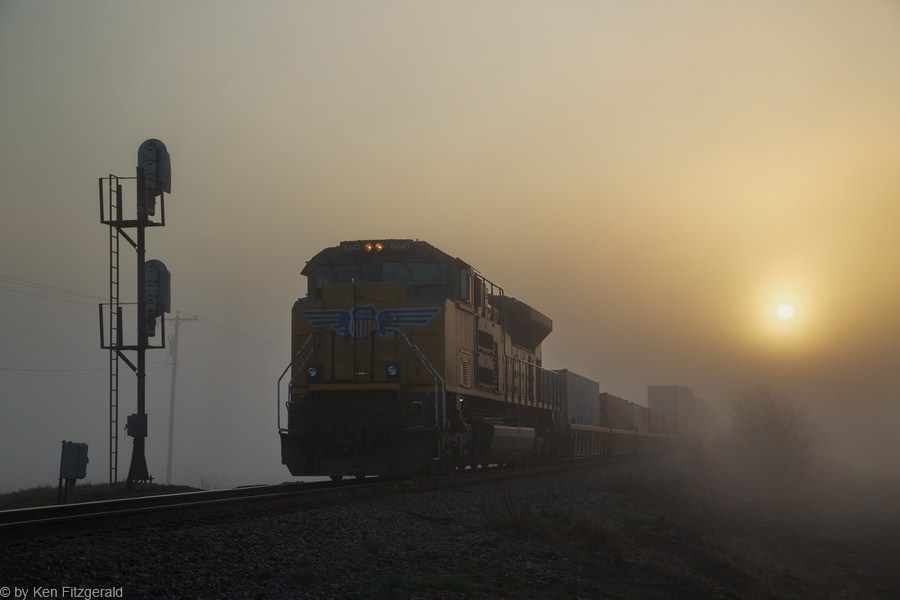 After the highway traffic had cleared there was time for one final photograph here at a normally familiar location that has taken on a whole new aspect due to a change in the weather. 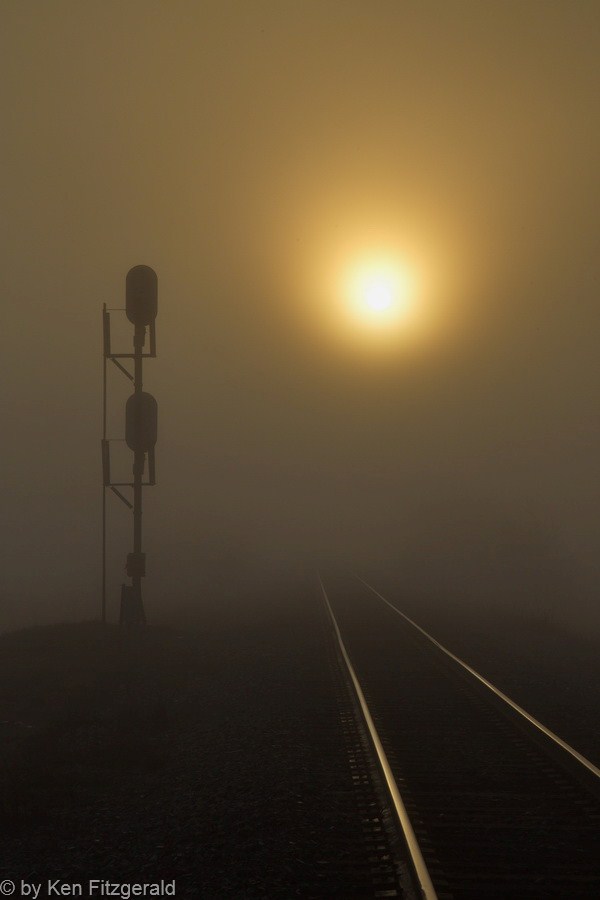 I like shooting on sunny days as much as the next train photographer, but I never put the camera away when that changes as the railroad runs 24 hours a day no matter what the conditions, and there are still facinating scenes of that action to be recorded.  I drove through Davidson Yard on the way to Hodge and heard on the radio the 8838 was leading an ILBDI train that would be tying down in the #5 bypass until Dallas Intermodal was ready for the train later in the afternoon. 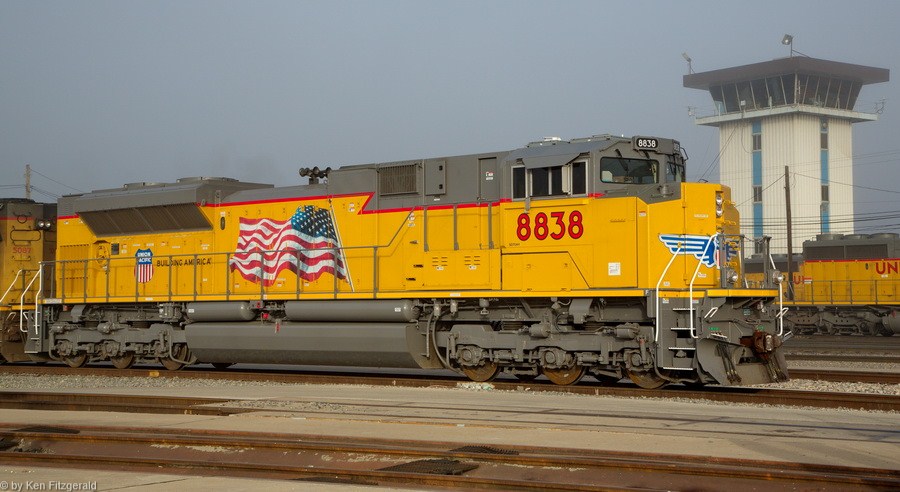 I took a roster shot of the new SD70AH in full sunlight with the bowl tower as a background.  Now I was truly an all-weather railfan this day and it was only 9:04 am!

Waking up in Missouri