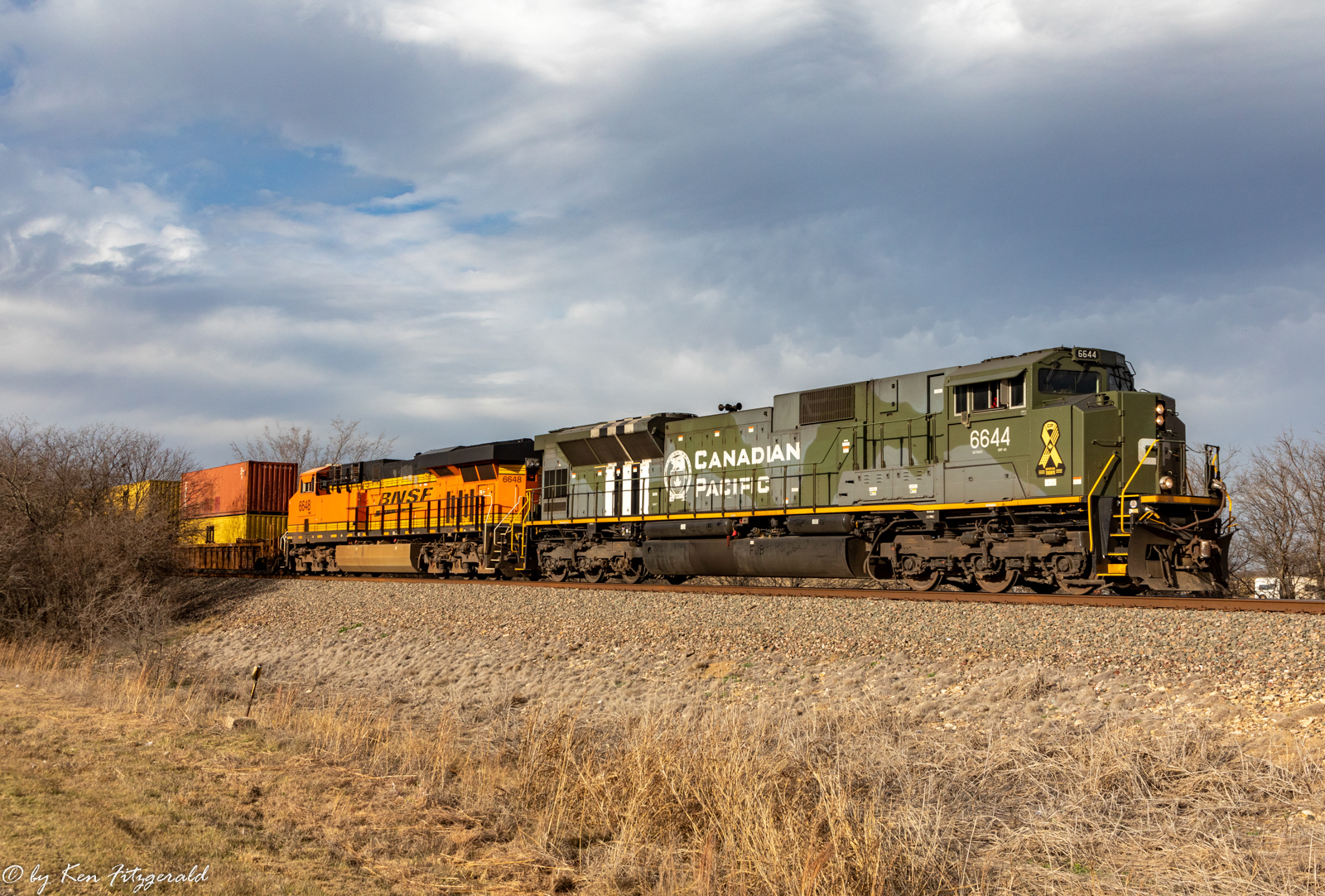 I received a message from a friend around noon today, January 14th, that a BNSF intermodal train from Clovis to Alliance Yard IMF was being led by the CP’s Veteran’s Tribute locomotive number 6644. This SD70ACU is painted in a Canadian Military paint scheme to honor World War Two D-Day veterans, and the locomotives number 6644 represents June 6th, 1944. As the train made its way eastbound towards Fort Worth on the ex-BN Wichita Falls Sub, I left the house around 2:15 pm and headed north through Saginaw on Business 287.

I decided to check out the crossing at Hicks Avondale School Road and crossed over the UP Duncan Sub to survey the adjacent BNSF Wichita Falls Sub. As luck would have it as soon as I stopped on the east side of the crossings to turn around, the lights and gates started and a southbound UP train rolled by at 3:01 pm.

As soon as the train cleared the crossing I continued on north and passed over Highway 287 took Bates Aston Drive to the west switch at Avondale. A westbound intermodal was in the siding but the eastbound signal was still dark so I headed on towards Rhome. The overcast had thickened up now, but I passed through a sucker hole at a nicely unobstructed private crossing about halfway to where now County Road 4925 rejoins Highway 287.

When I reached the Highway 287 intersection the clouds had closed up again and I spotted the headlights of my target train in the distance leaving Rhome. I made fast 180 degree turn and highballed back to the crossing where the sucker hole was patiently waiting for me. I crossed my fingers and the sun was still shining in this one spot when the train caught up to me a few minutes later at 3:27 pm. I managed this three photo sequence of its passing.

In my book I had nailed the shot in near perfect light, and the sun quickly slipped out of sight as I followed in the train’s wake back east towards Avondale. Since the intermodal had to go down to Saginaw to make its own U-turn and head north on the Fort Worth Sub to Alliance Yard, I decided to cut across country and catch it one more time south of Haslet. I made it to the Blue Mound Road crossing with about ten minutes to spare before the train caught up to me at 3:59 pm.

This angle was slightly back lit so not having full sun was actually an advantage. Not wanting to get caught up in the evening rush hour traffic in this area I decided to head for home with my mission accomplished.

Two Perspectives of the Same Train

A Trip to the East Coast

Round Trip to College Station