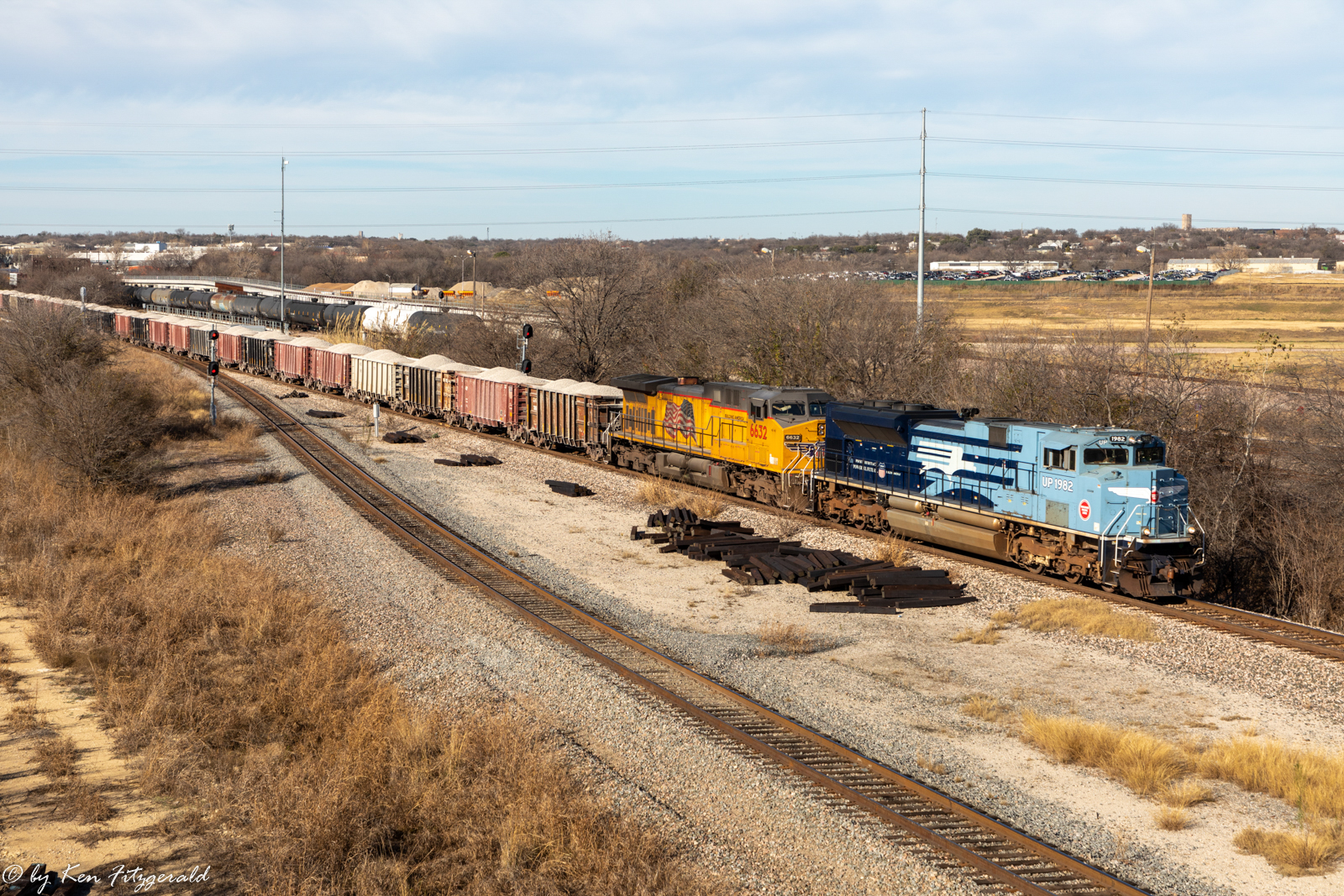 My last photo for 2021 of the UP ZAILC passing through Aledo after dark was OK, but at the time to kick off the new year I decided to not rush and to wait for something special. New Year’s Day was completely overcast with no interesting trains to be found, and the same situation existed for the 2nd and the 3rd. Finally on Tuesday the 4th information came through in the morning that a loaded rock train was leaving Chico southbound on the UP Duncan Sub with the UP 1982 Missouri Pacific heritage unit leading.

The skies were clear so I decided to load up my gear and go after it. My young railfan neighbor Luke Meacham also wanted to catch the UP 1982, so I swung by his house before we headed towards Saginaw just before noon. Over the radio we heard the rock train was going to take the siding at Hicks north of Saginaw, and we arrived there at 12:16 pm where we photographed the stationary train.

All indications were the train was going to be there for a while as the Chico to Fort Worth local was coming south behind it and an empty rock train was coming north was holding around the Trinity River bridges. Luke and I drove on south to the Saginaw Depot (ex-SP from Kosse, TX) where we pulled up just as a southbound BNSF freight was on approach to the diamonds.

A Herzog Maintenance of Way train was tied down in the siding off of the Wichita Falls Sub to Fort Worth Sub connector.

A few minutes later at 12:58 pm, a northbound yard switcher on the Wichita Falls Sub pulled up to the diamonds just as another BNSF freight train headed south on the Fort Worth Sub.

Immediately after the passage of the southbound train the yard job headed on north up the Wichita Falls Sub.

This job obviously planned to make some long reverse moves as it had an ex-BN caboose for a shoving platform bringing up the rear.

Just before the caboose vanished from sight, the southbound UP Chico Local appeared from behind the depot.

The local was running light engines with an out-of-service GEVO trailing the two powered SD40N’s.

Luke and I decided to wait a few minutes to see if once the local cleared into Peach Yard that the northbound empty rock train would head our way. That was exactly what happened at 1:36 pm.

The radio indicated the UP 1982 South would leave Hicks Siding after the arrival of the empty rock train, and we used this time to drive on south to the Northside Drive overpass for a well-lit afternoon view of the MP Heritage Unit. After parking on the shoulder and making our way to the bridge sidewalk, our first catch was a southbound TEXRail train at 2:22 pm. Note the crash barrier that separates the train from the bridge supports beneath us.

Ten minutes later a southbound BNSF autorack train came down their Fort Worth Sub with two KCS units up front. To the right of the train in the Trinity River bottoms you can see construction work beginning for the new bridge to be built for the future BNSF second main track from Bredenberg behind me north to Lake Wanda.

A few minutes later at 2:45 pm it was time for the main event as the loaded rock train headed south towards Tower 55 on Choctaw Main One in this sequence.

With these perfectly lit photos in the bag, Luke and I crossed over to the sidewalk on the south side of the overpass for a going-away view as the train was slowing to a stop.

The train came to a stop in a location where the head end was not readily accessible, so as the afternoon shadows began to lengthen and no other trains nearby worthy of our attention, we headed back home. I used the rest of the time before sunset to successfully take down the rest of our Christmas lights, thereby bringing an end to this holiday season.

A Fresh Repaint to End the Day