After the event in Springfield on the evening of Saturday, December 2nd I worked on my photo processing as we moved out of the yard and started northwest on the Fort Scott Sub towards Kansas City.  I was able to get the upload done before we got far enough out into the countryside that my wireless hot spot started to lose signal.  As a side note during these events I would take two or three photos of each group with Santa which would total up to an average of 400 to 500 photos per session.  I would then cull out the bad expression, closed eyes, etc. pictures and end up with around 300 photos a night to upload to BNSF.

The GPS map on my phone mirrored the multiple curves I was feeling as we rolled along. I pulled up the Online Dispatching System and saw we had plenty of trains to meet on the way to Kansas City.  Most were waiting for us on the roughly six miles of two main tracks at Fort Scott where the Afton Sub joins in and at the numerous sidings to the north.  I fell asleep somewhere north of Fort Scott and when I awoke we were parked somewhere in Argentine Yard and I was looking at the side of a hopper car outside my window.

On the other side of our train was a main track leading to fuel racks at the east end.  On the way back to my room from breakfast I took this shot of an eastbound train moving up along side us. 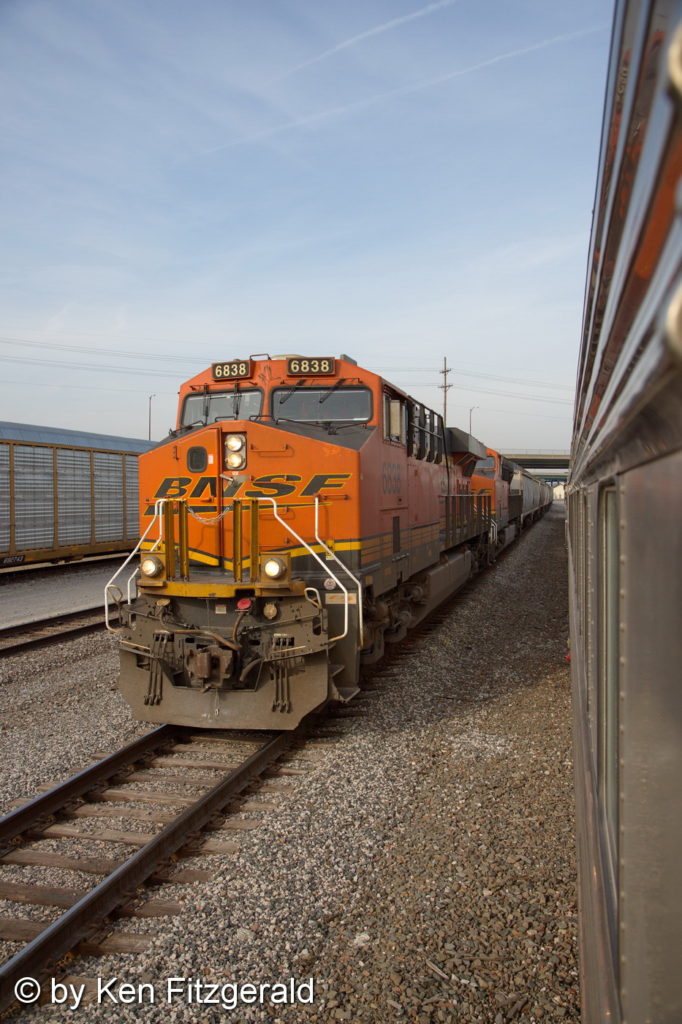 I paused at the door to my sleeper and delved into the past for a minute. 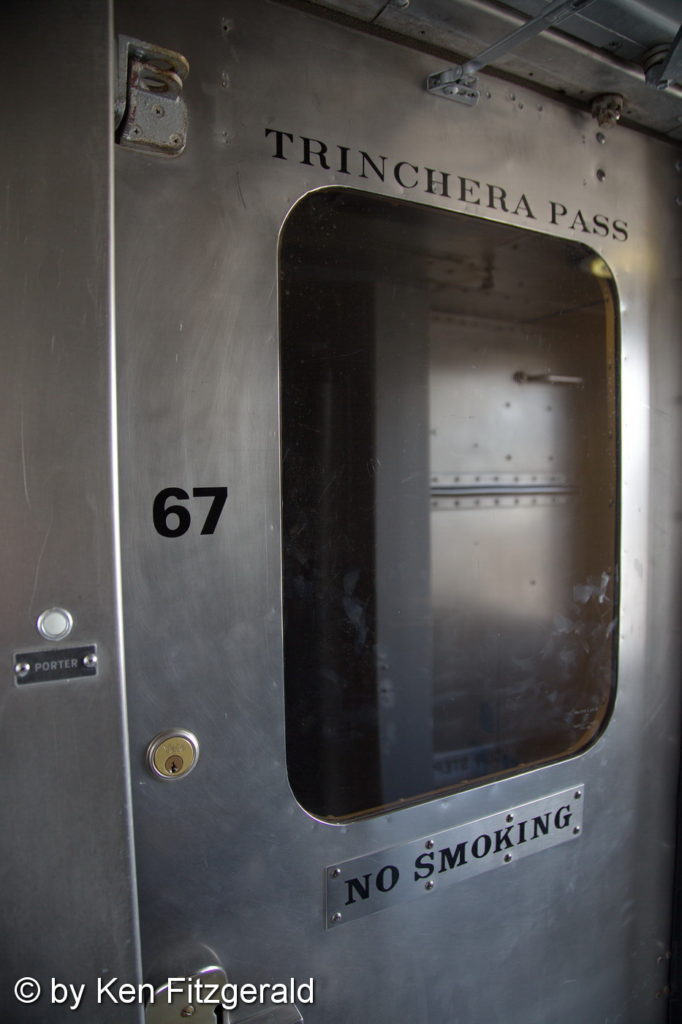 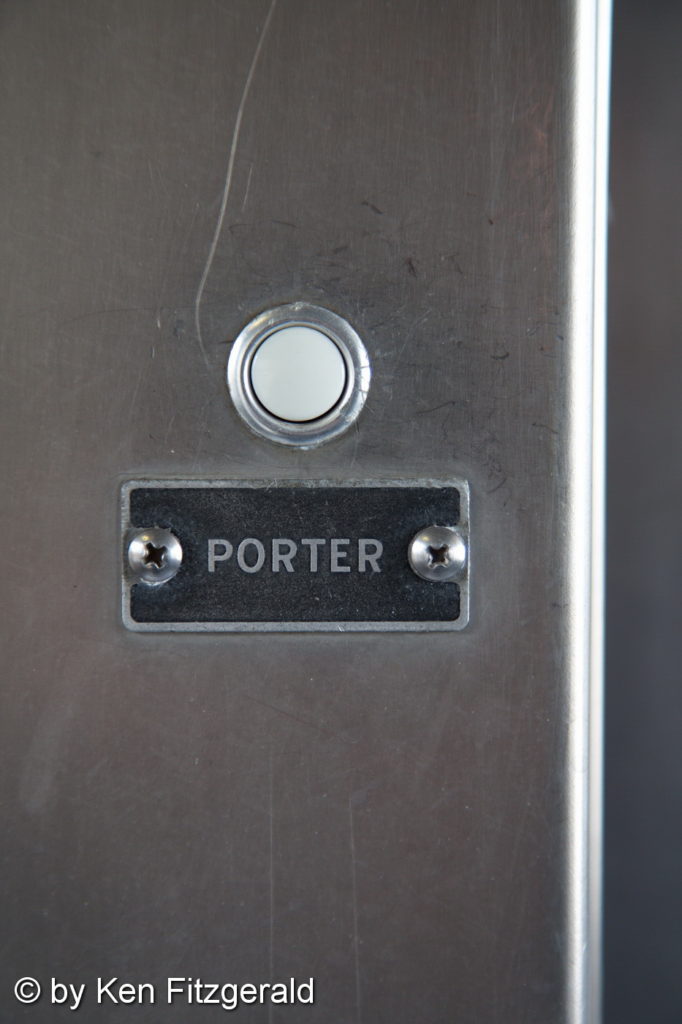 There was no getting off the train here for a walk so I took a nap and watched local TV in my room until after lunch when we began our positioning move to Kansas City Union Station for our fourth and final military family event of the trip.  This time I decided to work both sides of the vestibule at the end of my car.  As we moved slowly east we passed an eastbound train sitting at the fuel rack. 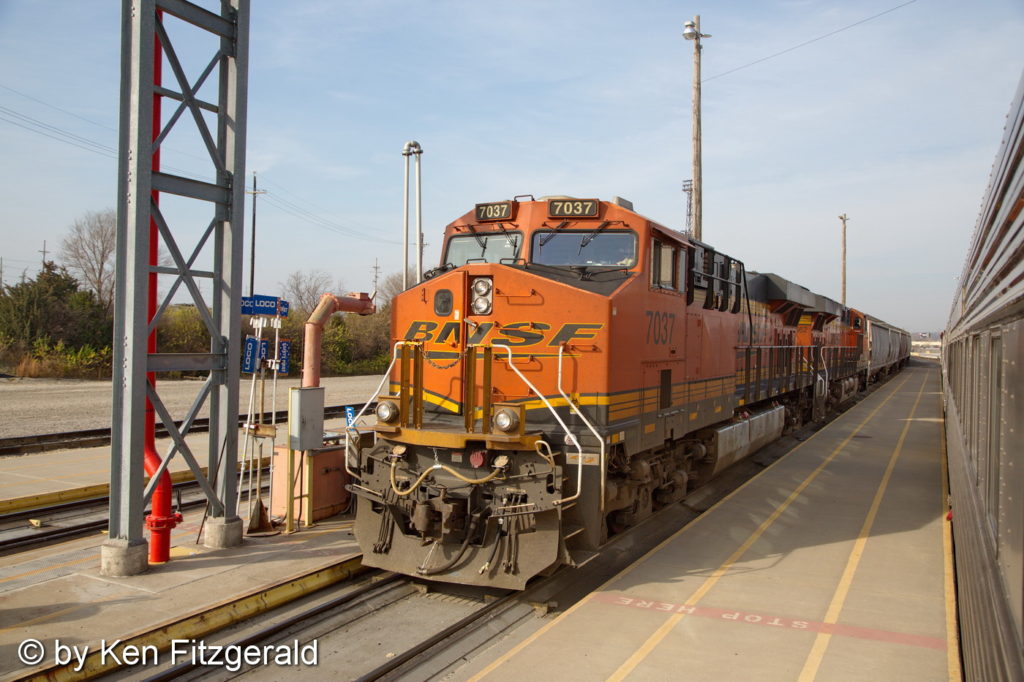 This view is of the west side of the diesel shop. 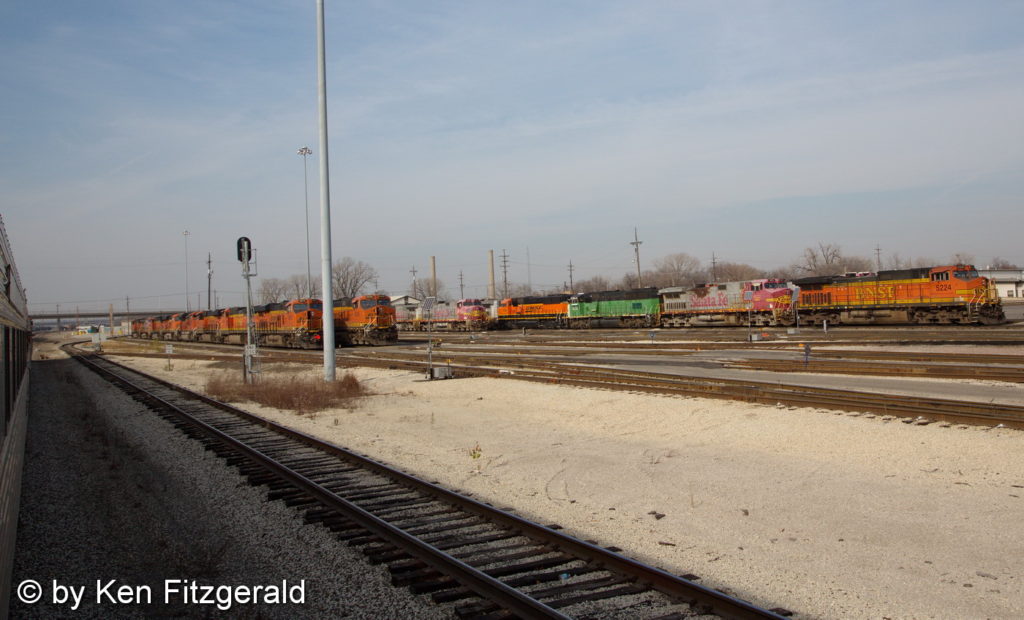 And a few minutes later the east side. 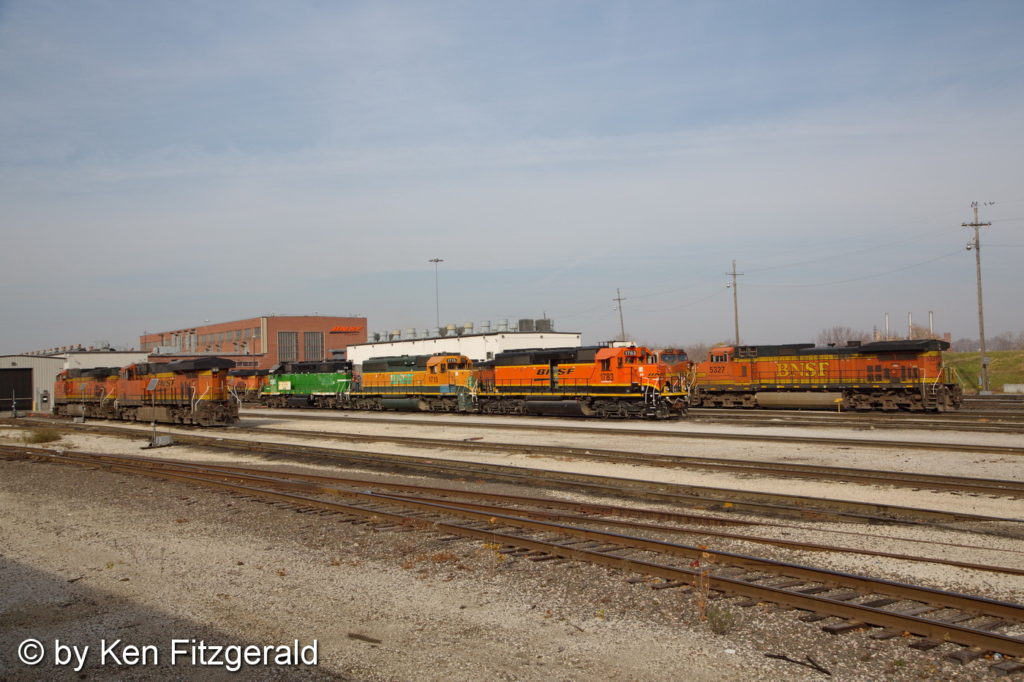 Next I spotted the long-closed AY Tower.  It looks like it is someone’s office space now. 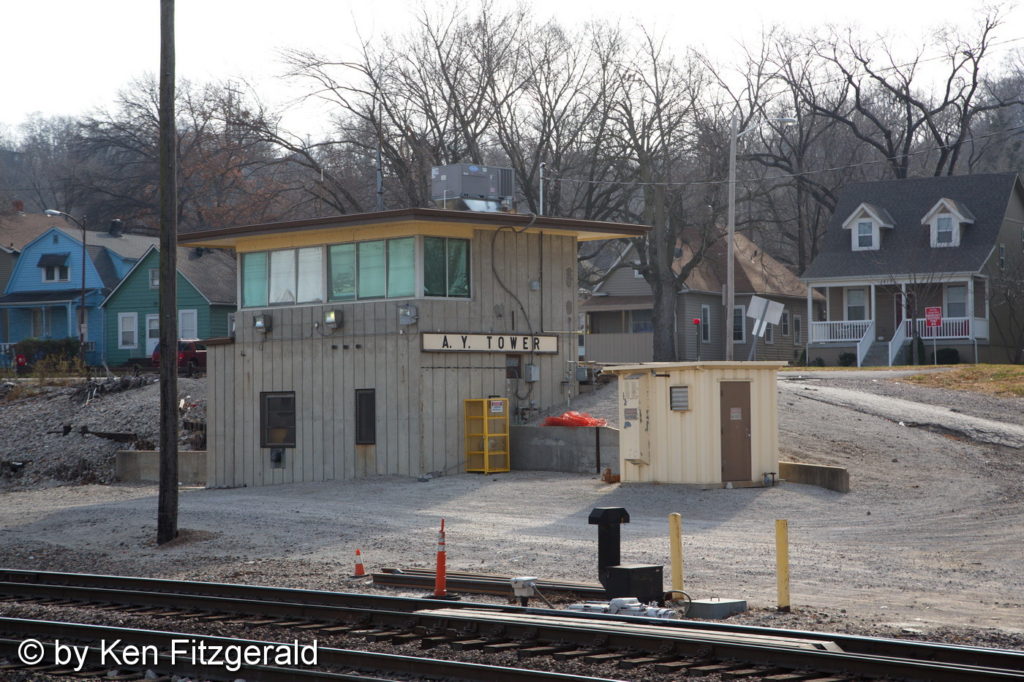 Before long we crossed the line between BNSF and Kansas City Terminal Railway as we approached the interlocking at Santa Fe Junction. 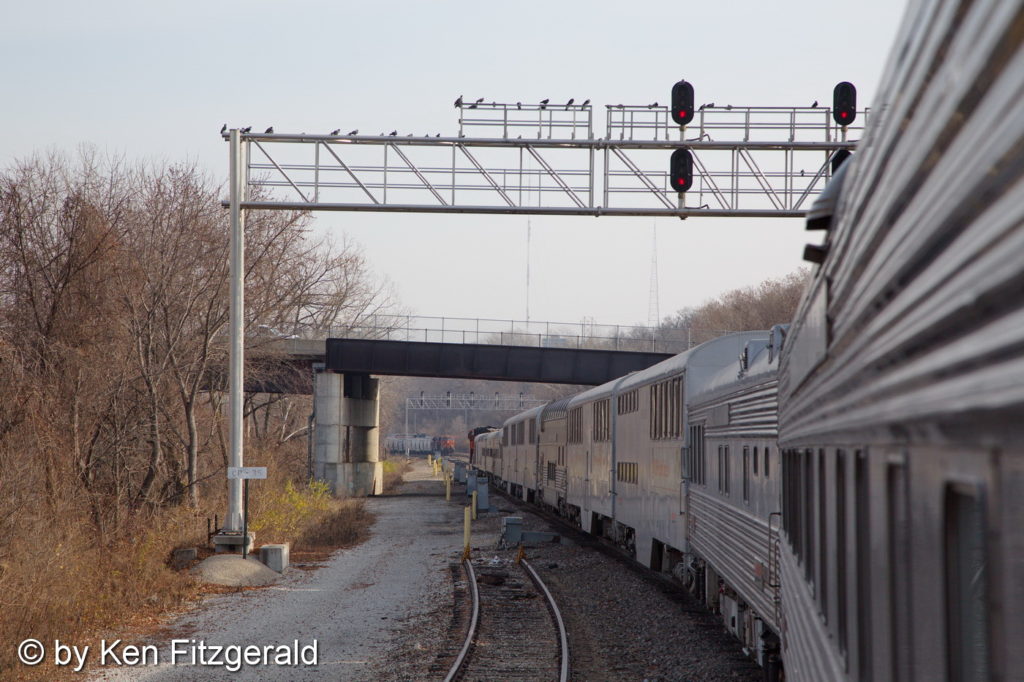 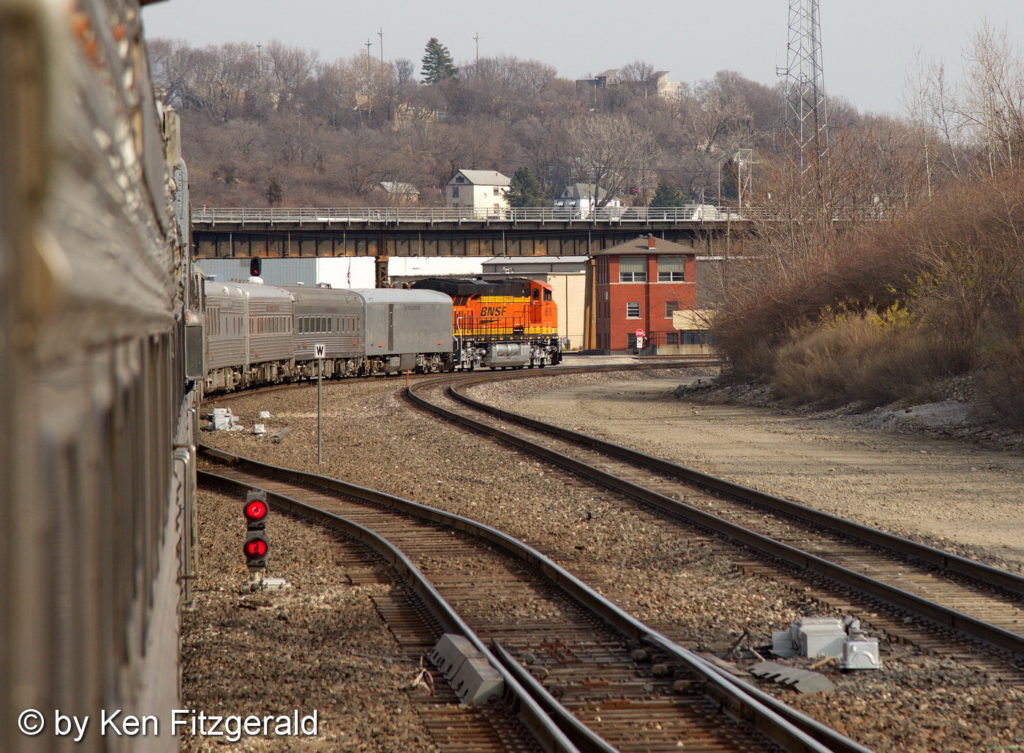 This view at the Junction is looking north towards the bi-level railroad bridge over the Kansas River. 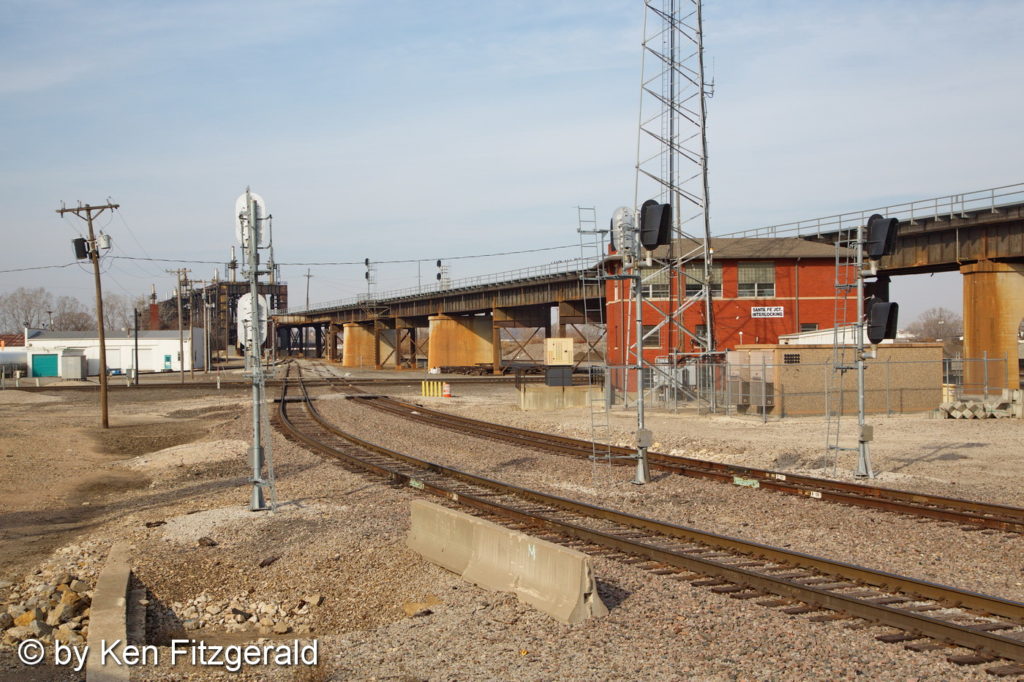 A few moments later as our eastbound train was crossing the diamonds you can look up and see parts of the new “fly-over” east-west main tracks built back in 2004. 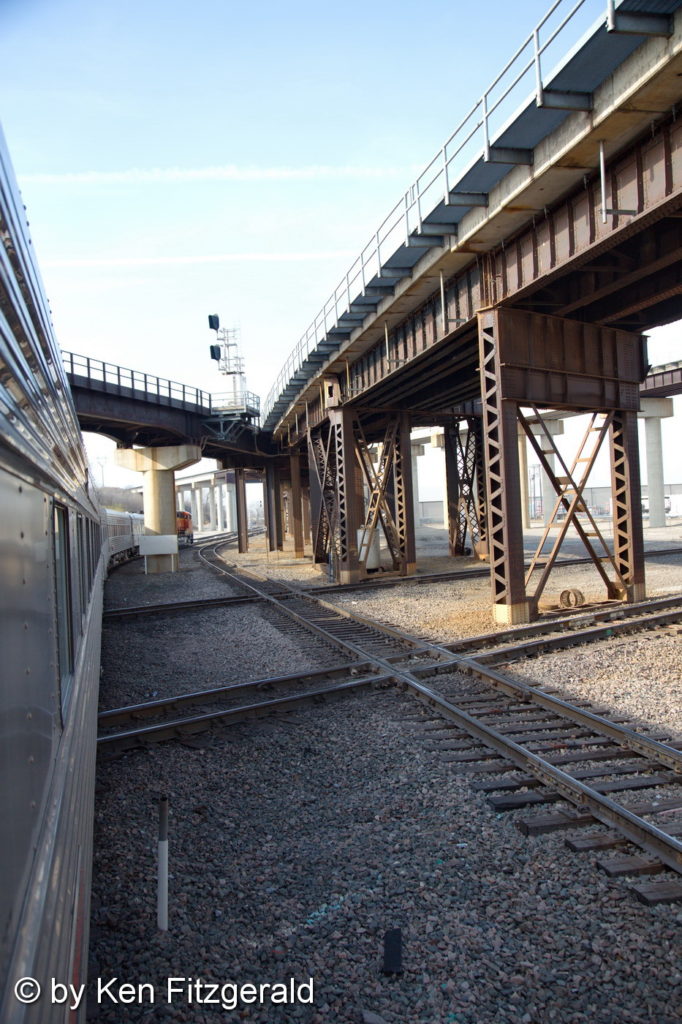 We moved up the ramp and at the top I took this view of Kansas City. 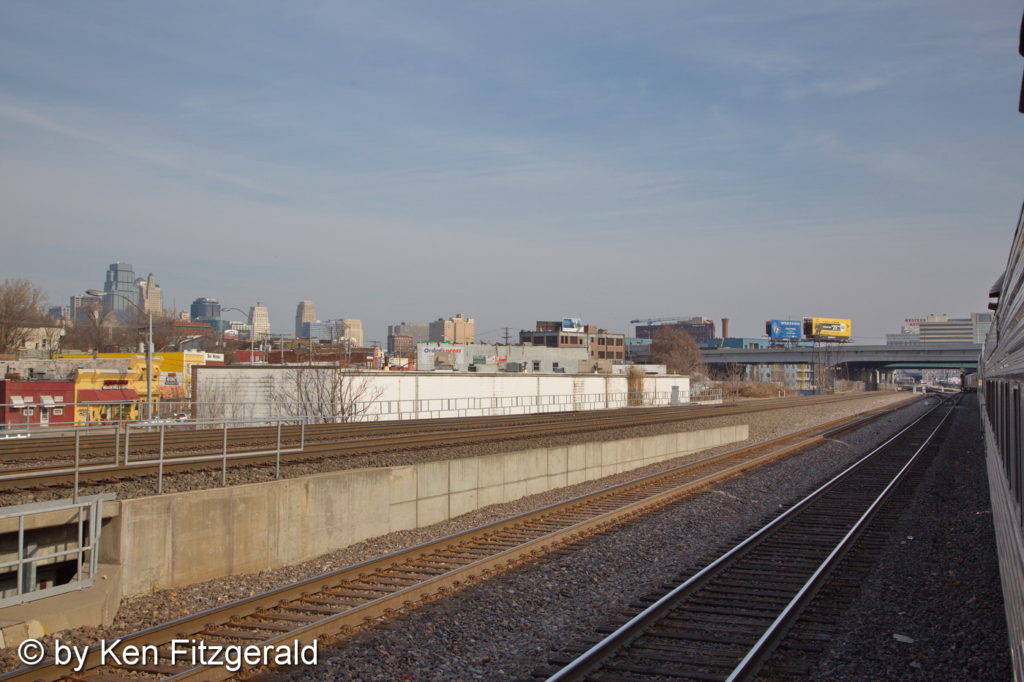 I heard a growing rumble behind me and turned to quickly capture this view of the eastbound train we had earlier passed by at the fuel rack now overtaking us at speed coming down off the fly-over. 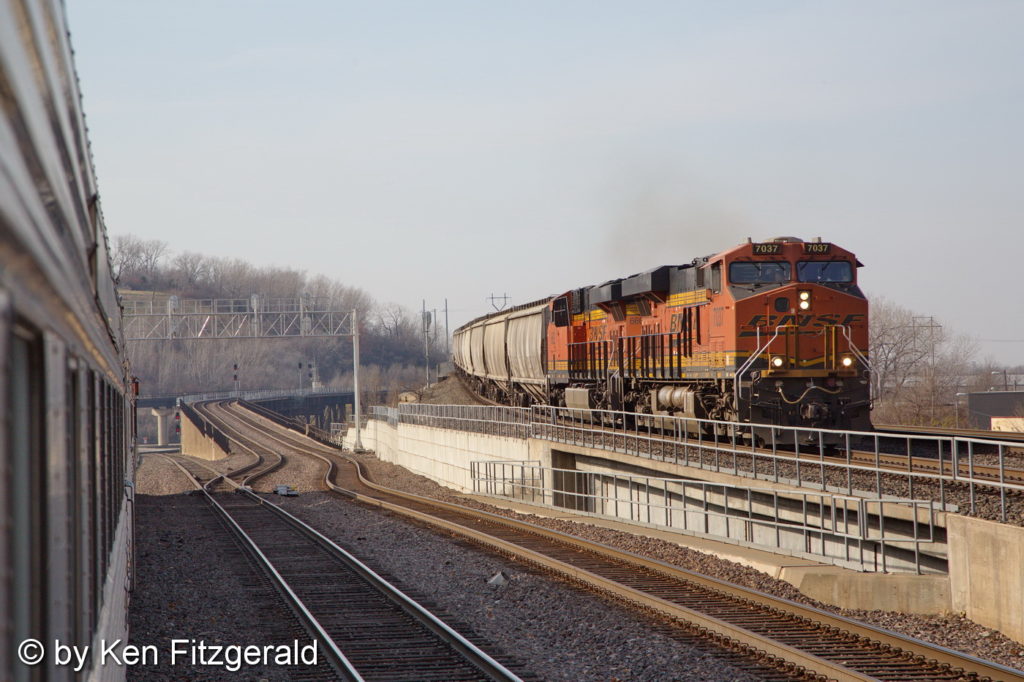 Due to track lengths at the station we had to split the train up and set out the four living cars and put the train together in the same configuration as back in Fort Worth with the remaining eleven cars bracketed by the two locomotives.  As we made these switching moves a westbound intermodal swept past us on the way to Argentine Yard. 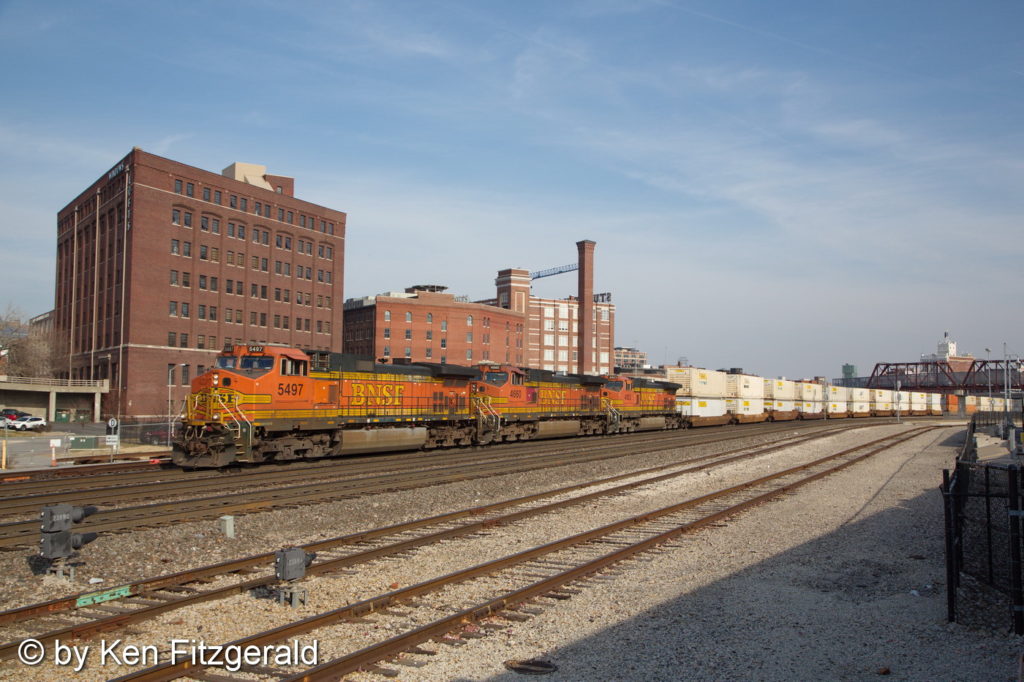 We had about two hours before boarding would begin so once we were tied down I got off and walked through Union Station to capture the feeling of Christmas in Kansas City. 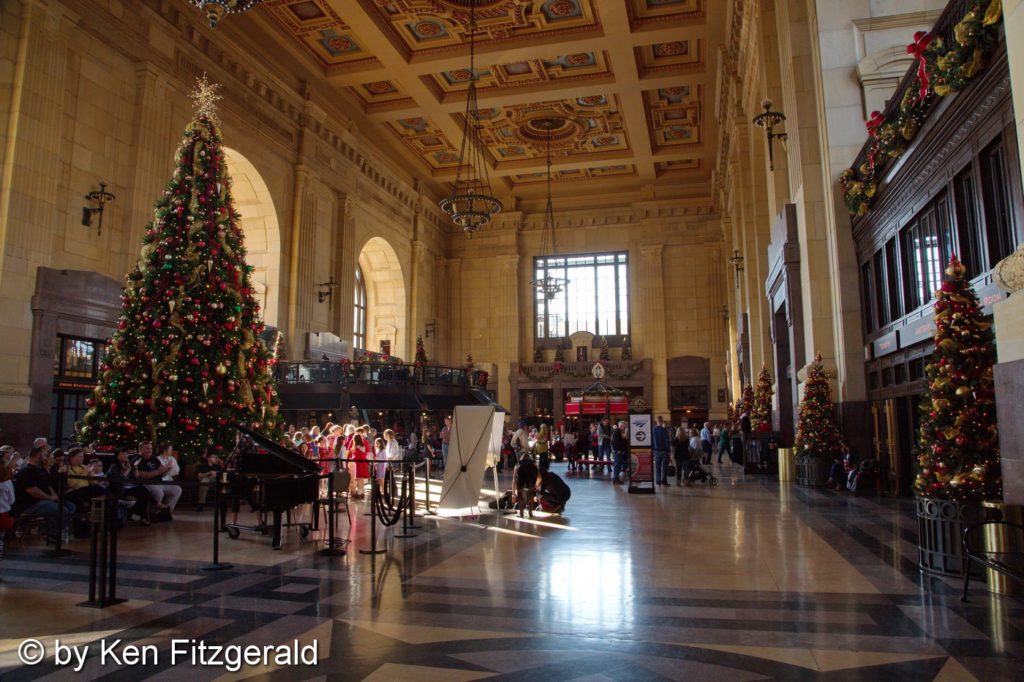 I made good use of the upper viewing galleries. 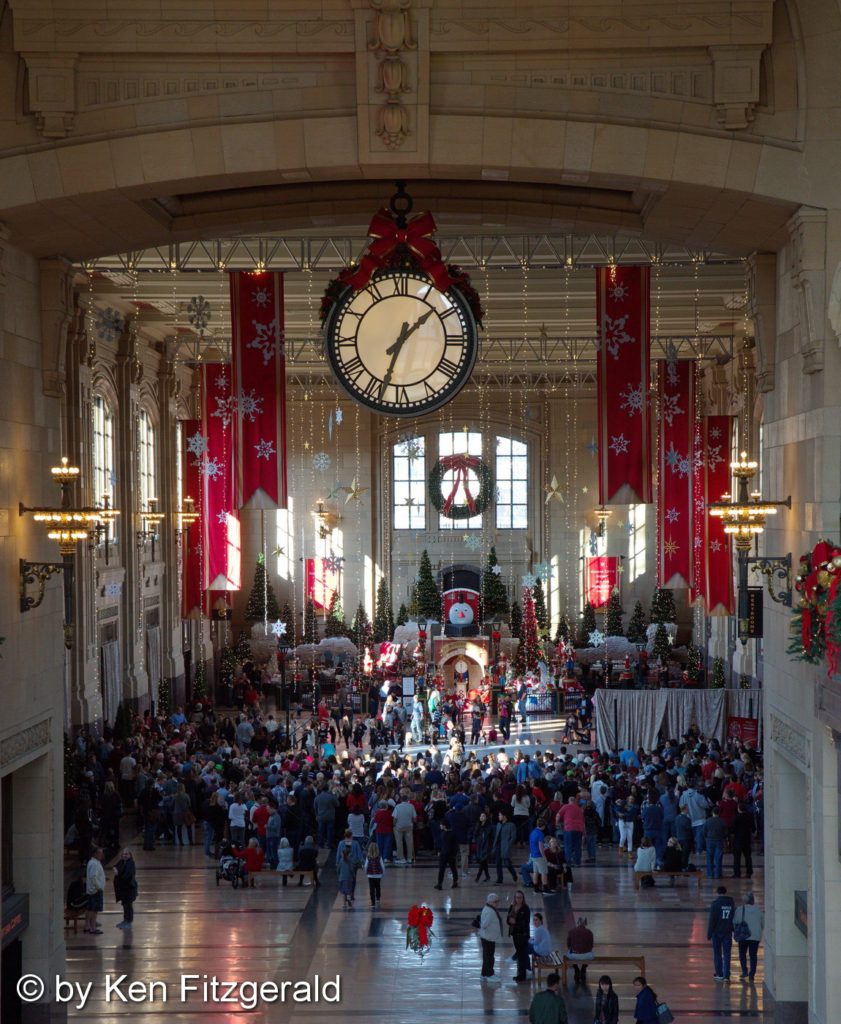 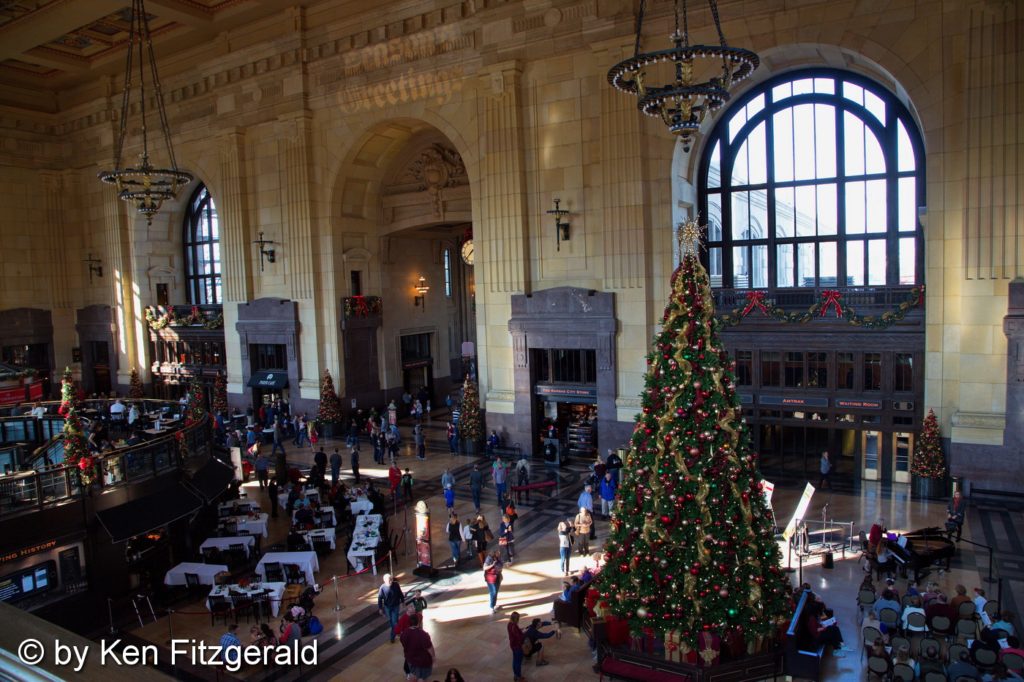 I bought a railroad-themed snow globe in the Kansas City store and walked back to the train.  I made a detour by the ex-VIA/CN #6507 FP9A that is now on permanent display here as the KCS #34. 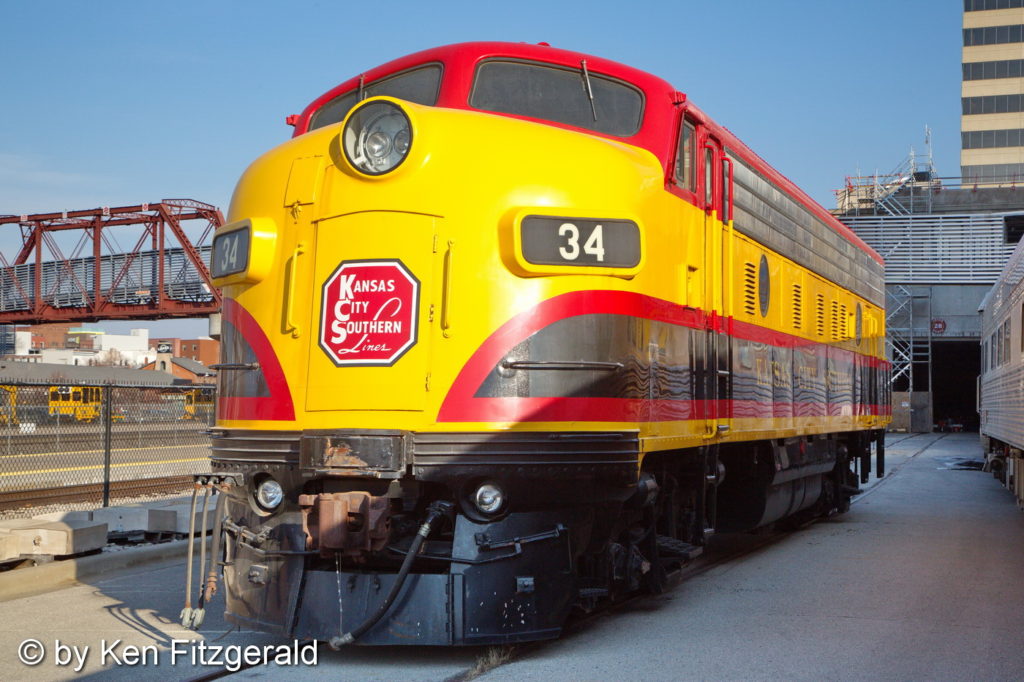 Noticing KCS 34’s reflection off of our train parked to the right I tried this artistic view combining the two. 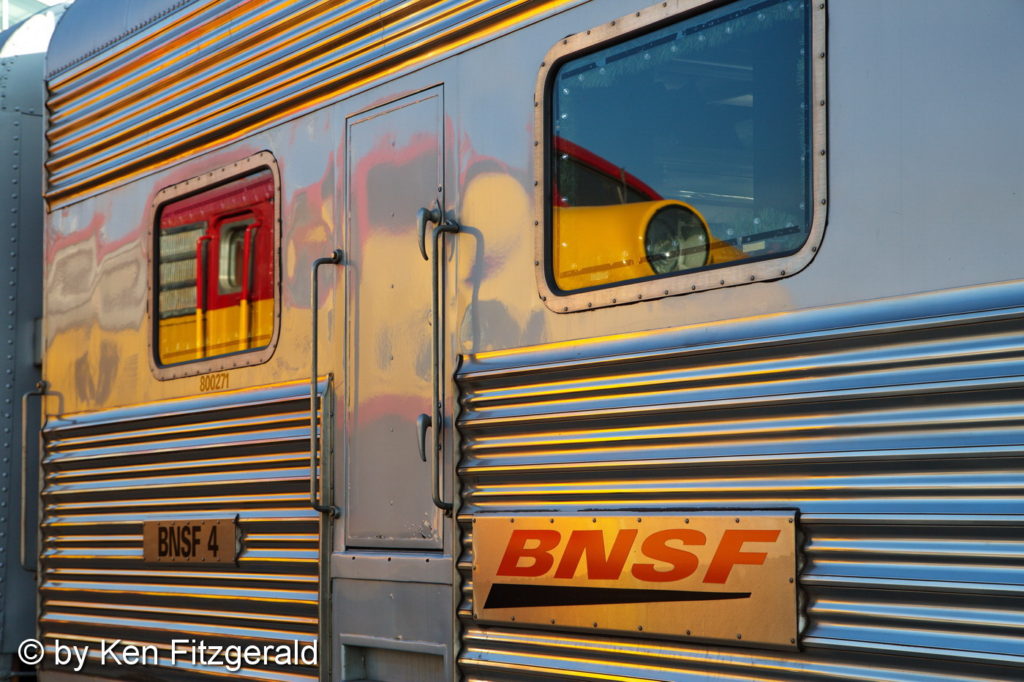 As boarding time approached I climbed up into the adjacent parking garage to capture this crowd of invited guests.  This was only a part of the group waiting to board and by the time we were ready to leave we had achieved our normal loading of around 350 military family members. 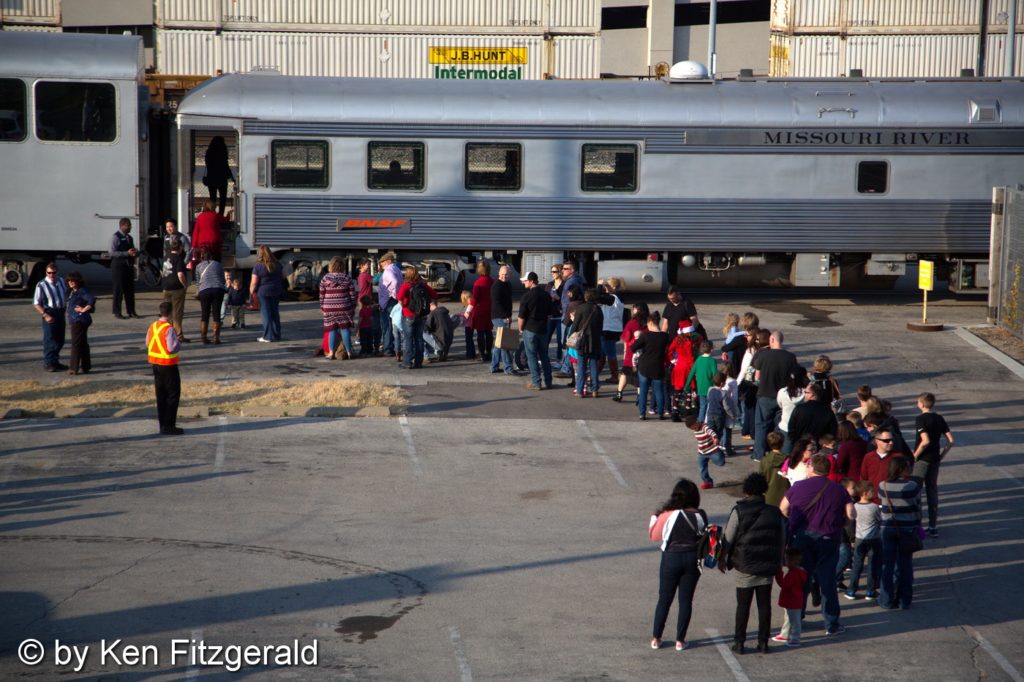 I had no idea where we were going for this day’s 90-minute round-trip but as we worked our way through the cars I could tell from brief glances outside that we were taking the route to Topeka. 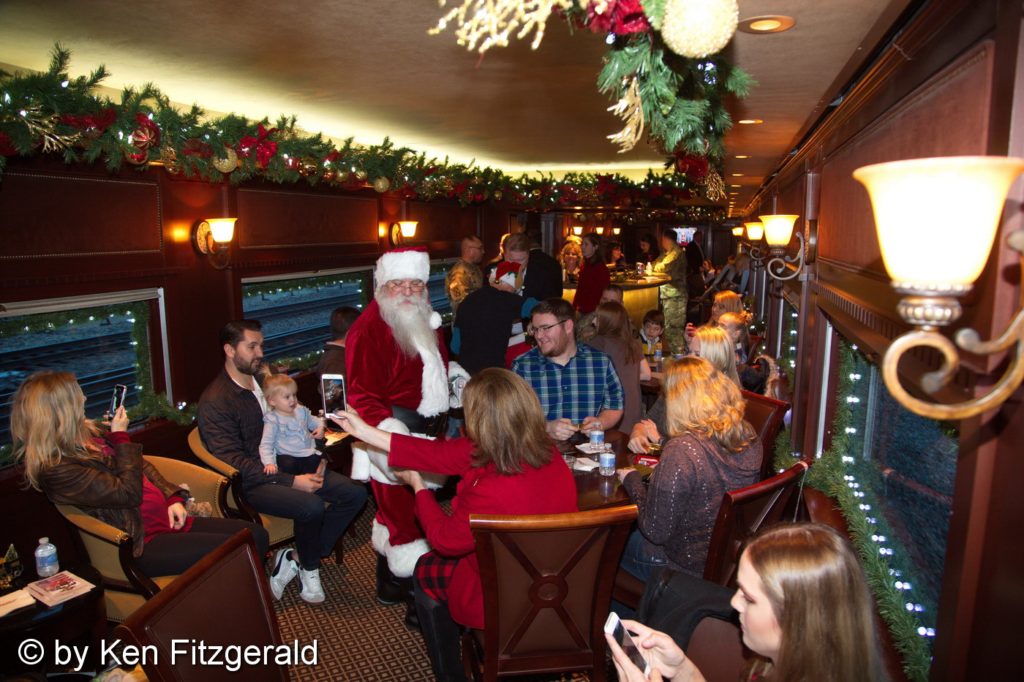 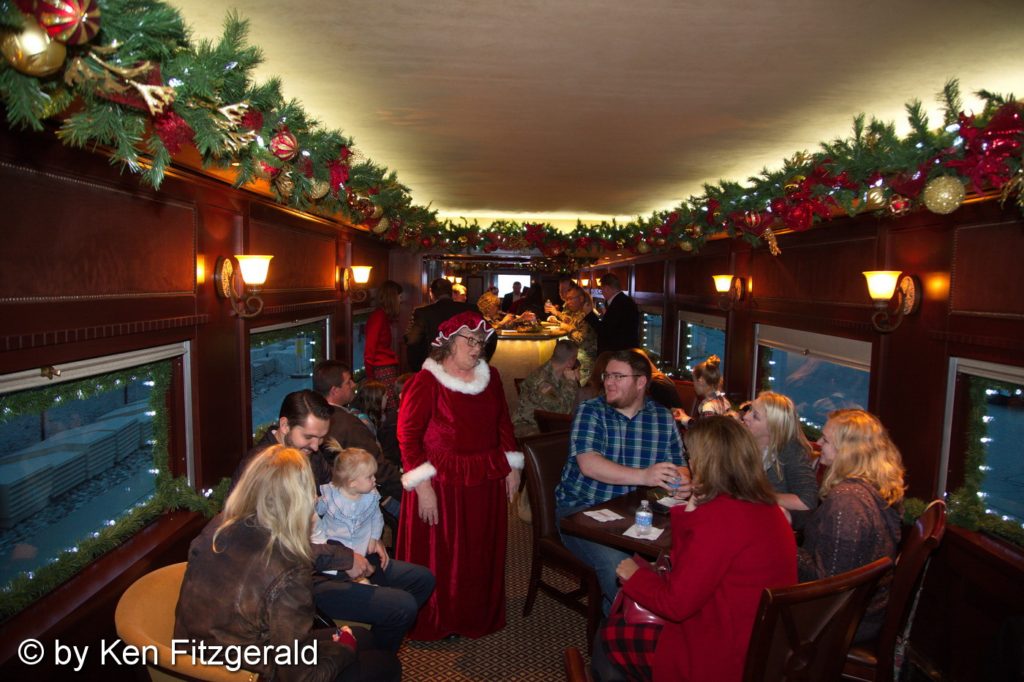 After our return the now normal ceremony to hand a $10,000 check to the local military support organization was held outside the train. 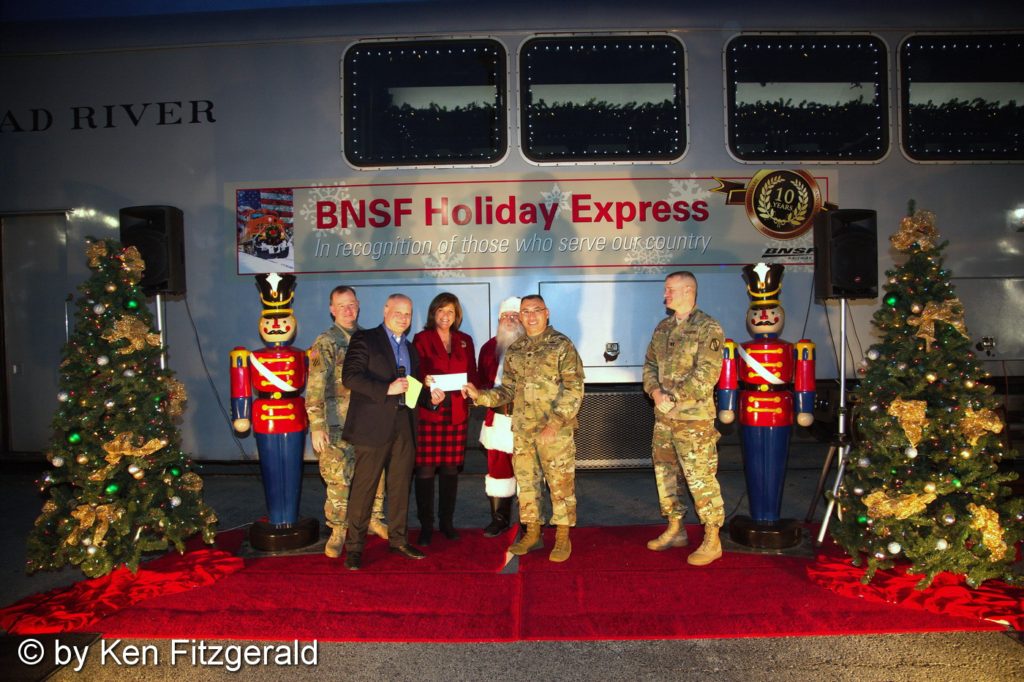 Once we wrapped up the final family photos with Santa in this scene it was time to head back to the Fred Harvey for our crew dinner.  I saw some potential for a final photo for the evening out the diner window and moved to the vestibule for this scene with a full moon. 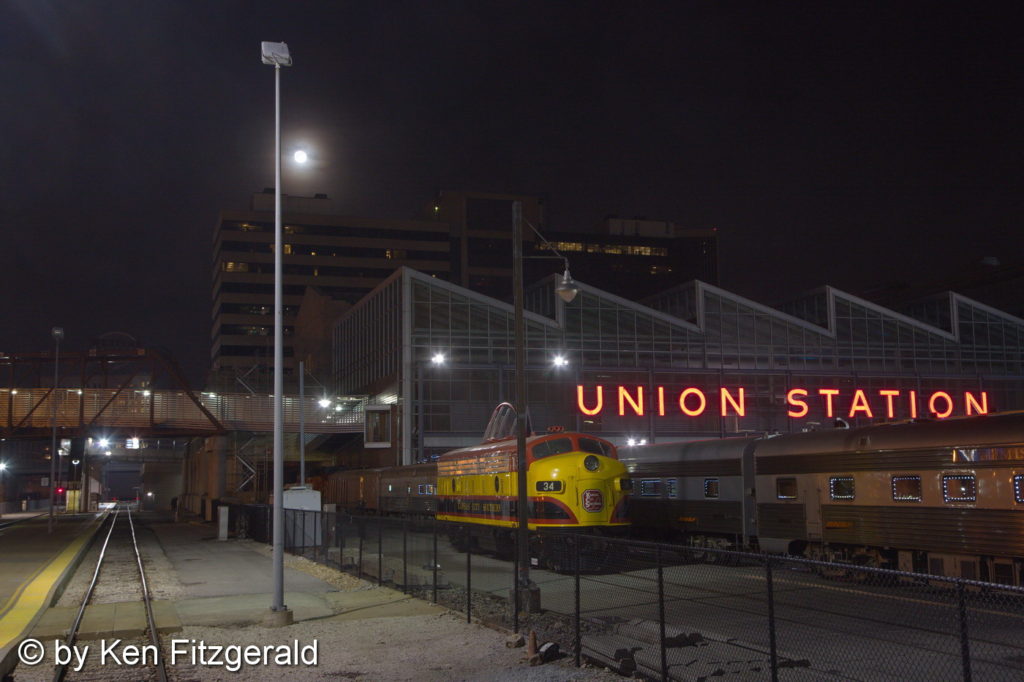 I went back to my room and finished all my photo processing and uploading before taking a shower and dropping into bed.  I never felt a thing when later on some time the train was reassembled and taken back to Argentine Yard.  Part V the final chapter of this trip coming soon!