I have been slow in finishing up my trip to Cajon Pass in late January, so let’s take care of that right now starting with a photo at sunrise. 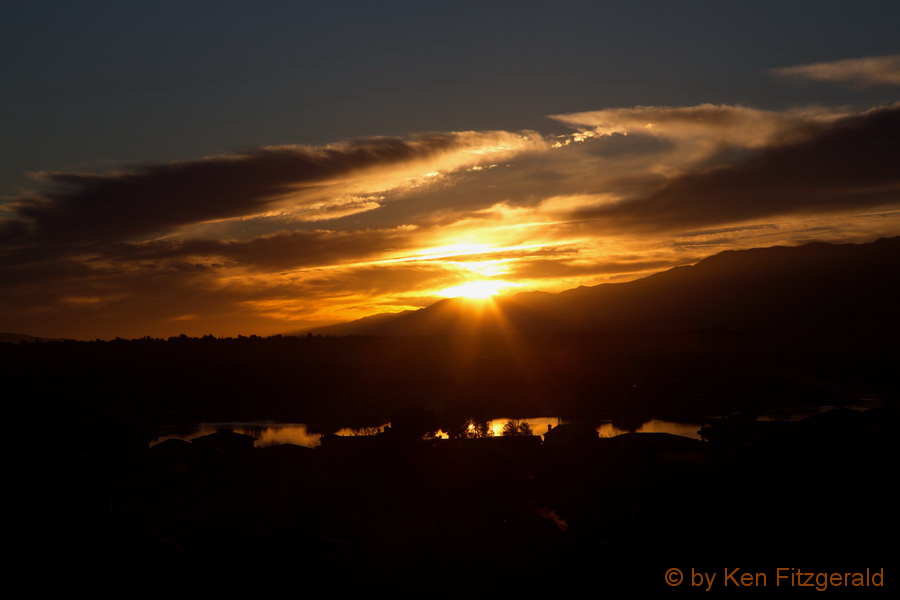 Later in the morning I moved back west to a hilltop at the west end of Summit to shoot trains coming from both directions.  Here is a westbound UP intermodal about to start down the hill to San Bernardino. 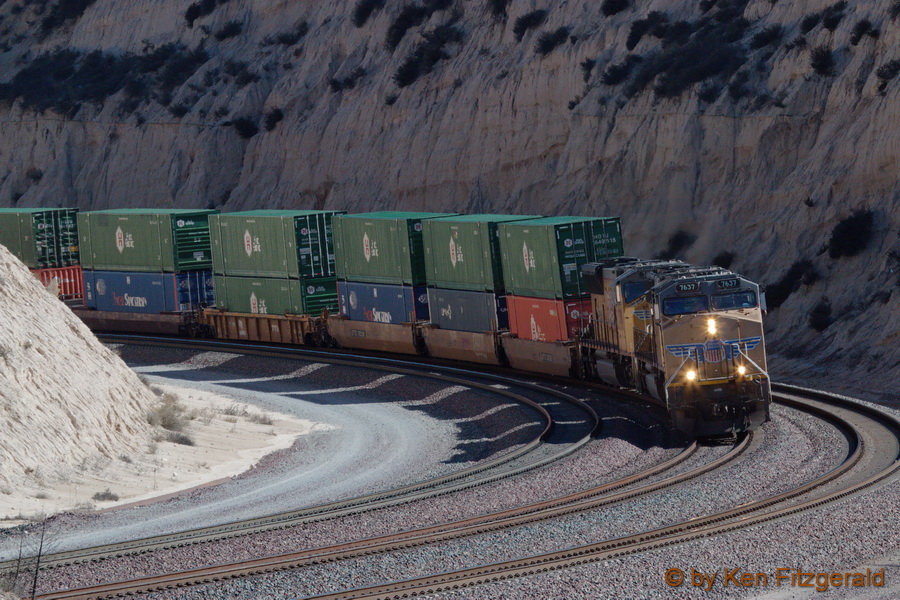 A few minutes later an eastbound UP came charging up the grade.  The Fedex truck in the background is on Interstate 15 fighting its own battle with gravity. 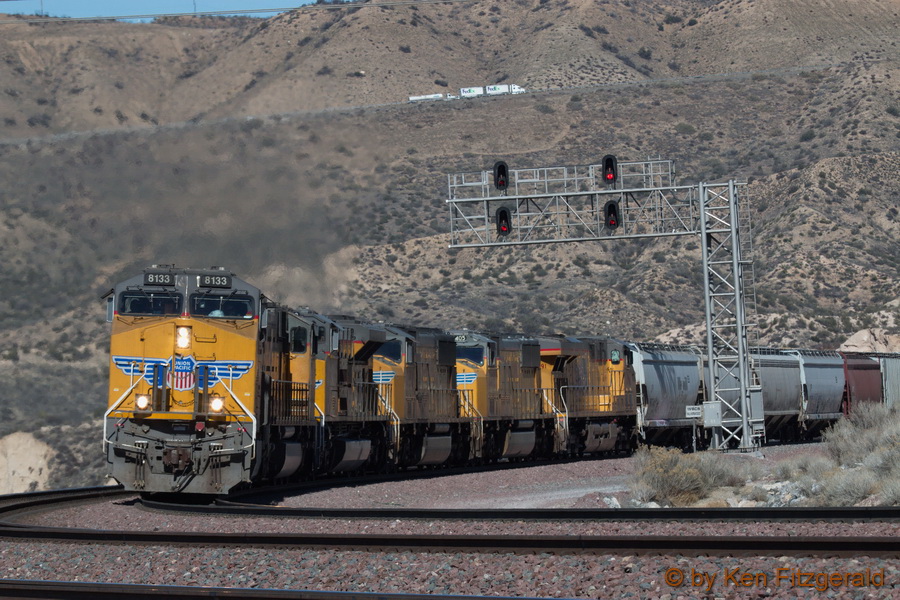 Next up an eastbound BNSF manifest is seen passing the interlocking at Silverwood while following the UP train on Main One.  Main Three drops away down a nearly 3% grade in the foreground. 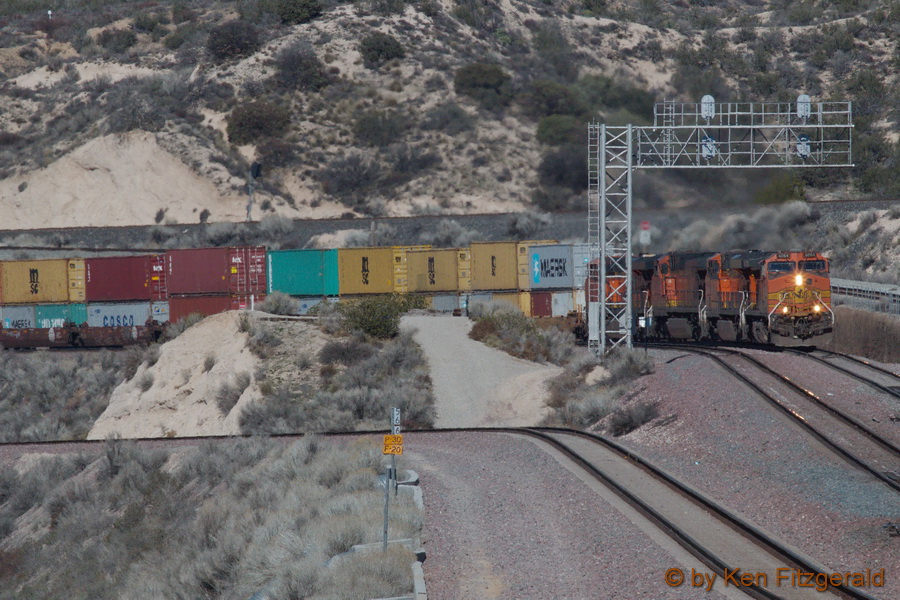 As soon as the eastbound BNSF manifest clears the crossovers at Summit a westbound UP mainfest starts down Main Two in full dynamic braking. 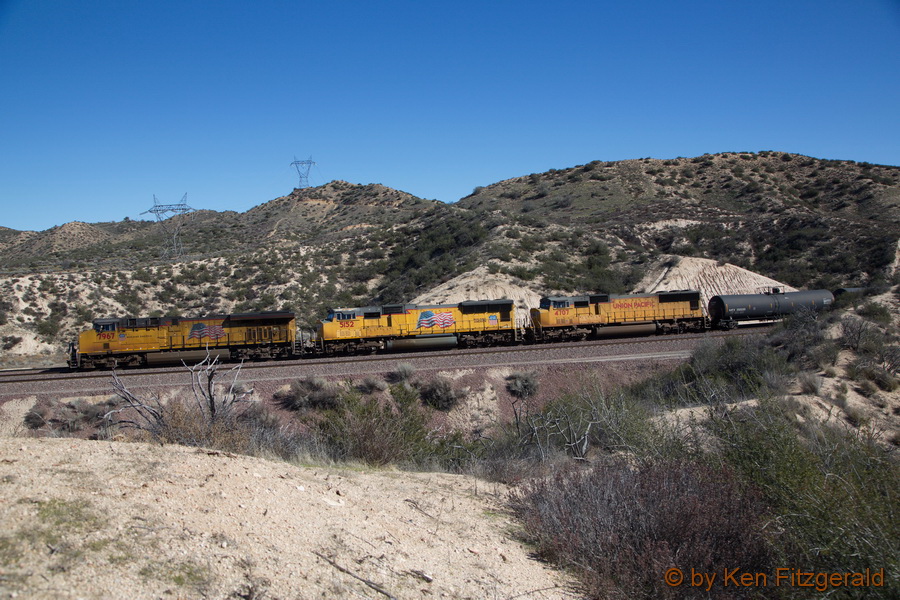 One of the two units on the rear end is an ex-SP motor. 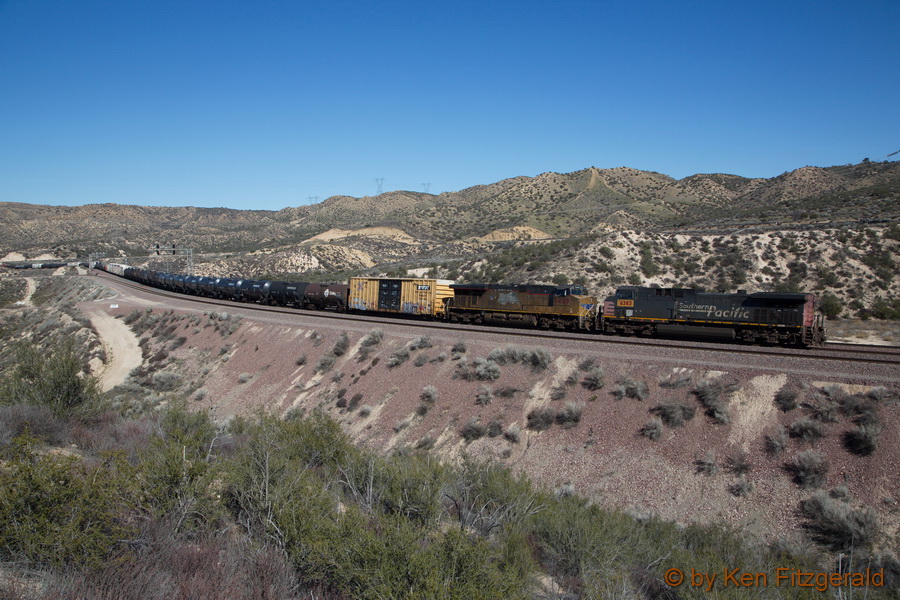 Traffic is non-stop as a few minutes later an eastbound UP intermodal passes Silverwood just west of Summit. 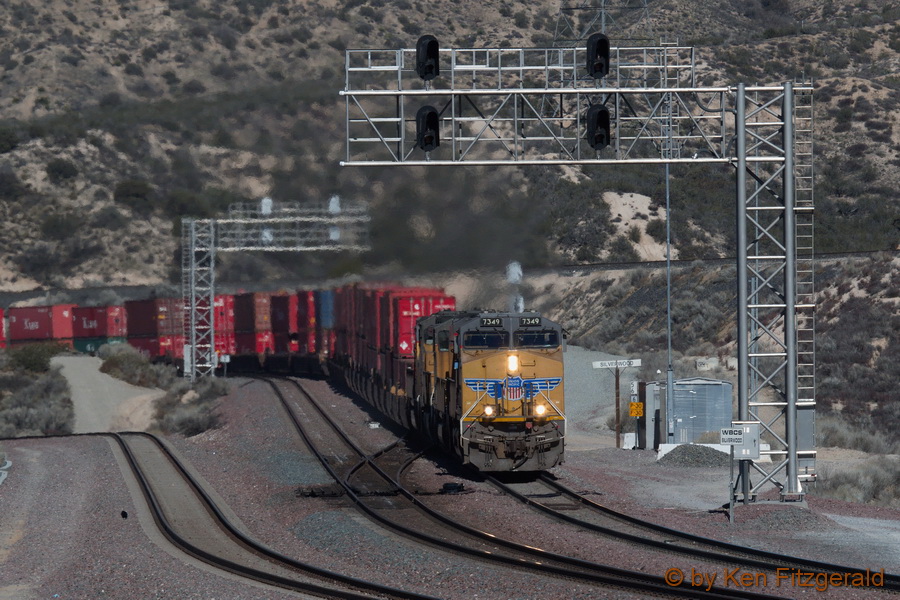 Almost forgotten in the background is the ex-SP now UP Palmdale Cutoff.  Note the lengthy crossover between the two lines added in the later years just below the lead unit of a westbound manifest train dropping downgrade. 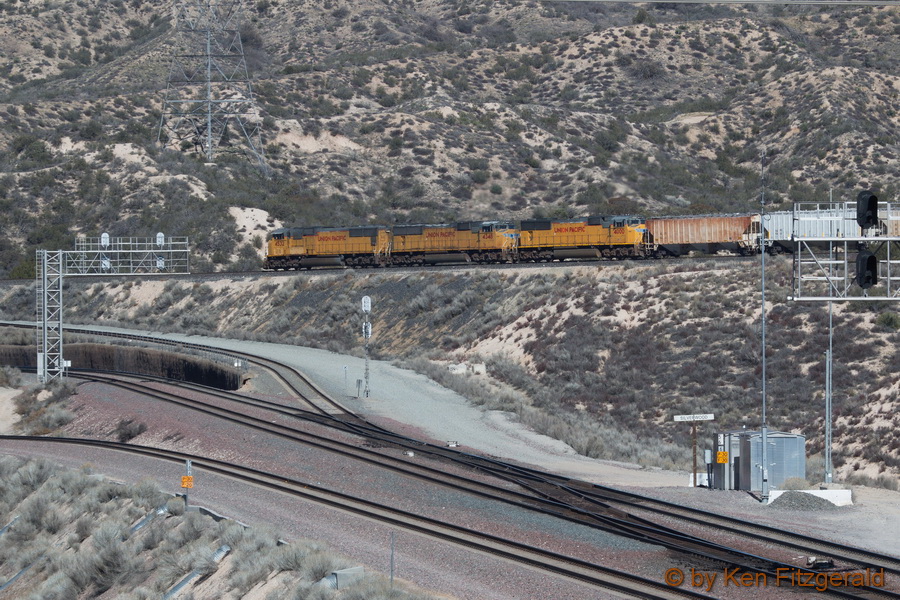 One more westbound UP manifest starting downgrade from Summit and then we decided to move to the famous railfan hot spot known as Hill 582. 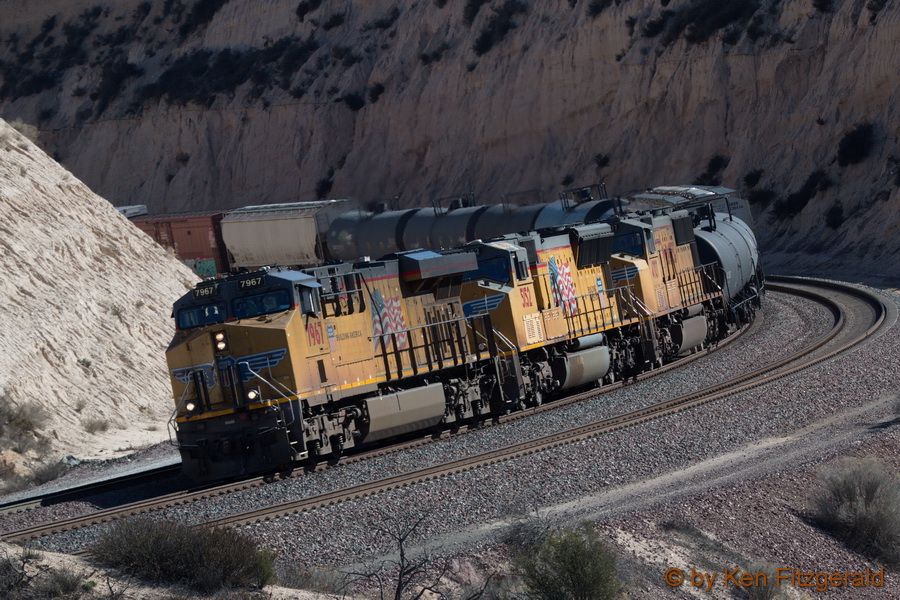 Hill 582 is on US Forest Service land as is most of the area around the top end of Cajon Pass and was built up several years ago by a handful of local railfans with trees and benches to make the watching of passing trains more comfortable.  It requires a 4-wheel drive vehicle or a hike of less than 1/2 mile to reach the spot about two miles west of Silverwood with Mains One and Two and the Palmdale Cutoff on the north side and Main Three on the south side.  Here is a BNSF manifest dropping down Main Two with some of the plantings and rock work in the foreground. 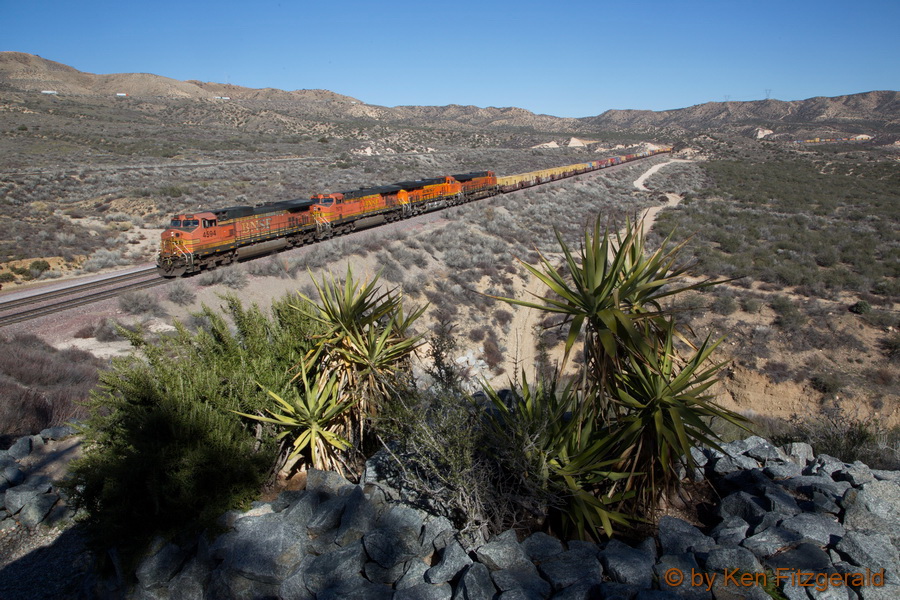 A few minutes later a UP bare table train follows along down main Two as seen from a different angle.  Note the dedications to those whose hard work made this spot possible. 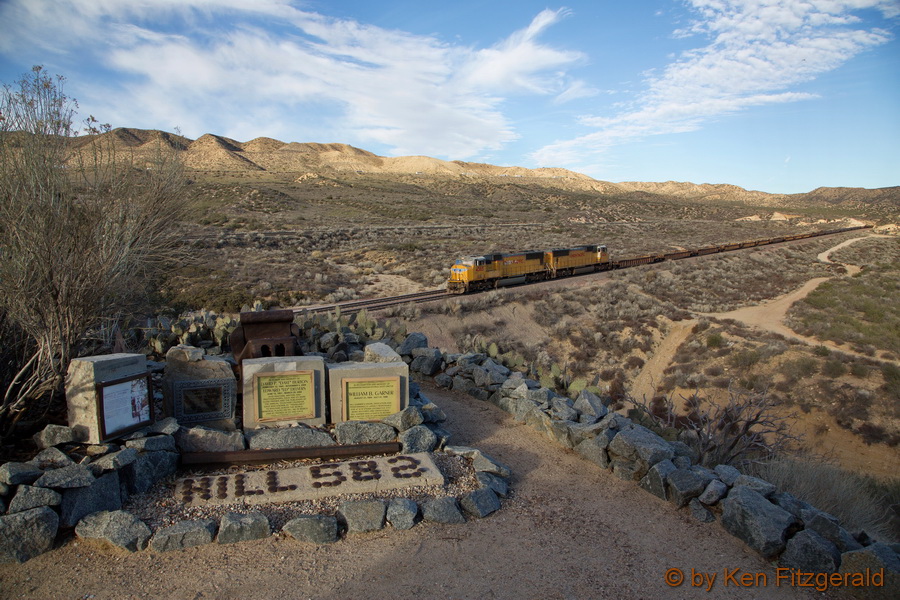 In the following sequence we see a meet between a westbound UP train and an eastbound BNSF train that illustrates why this spot is a magnet for area railfans. 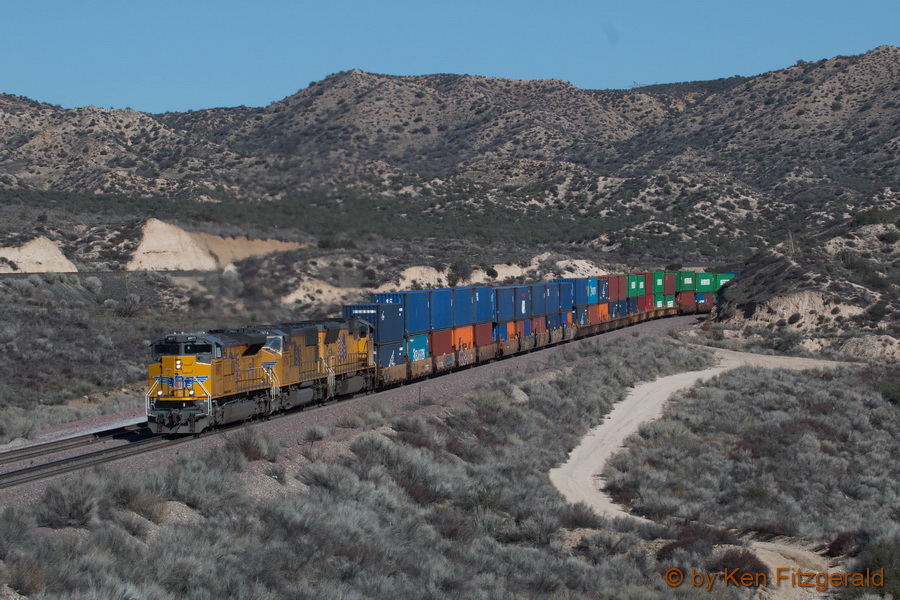 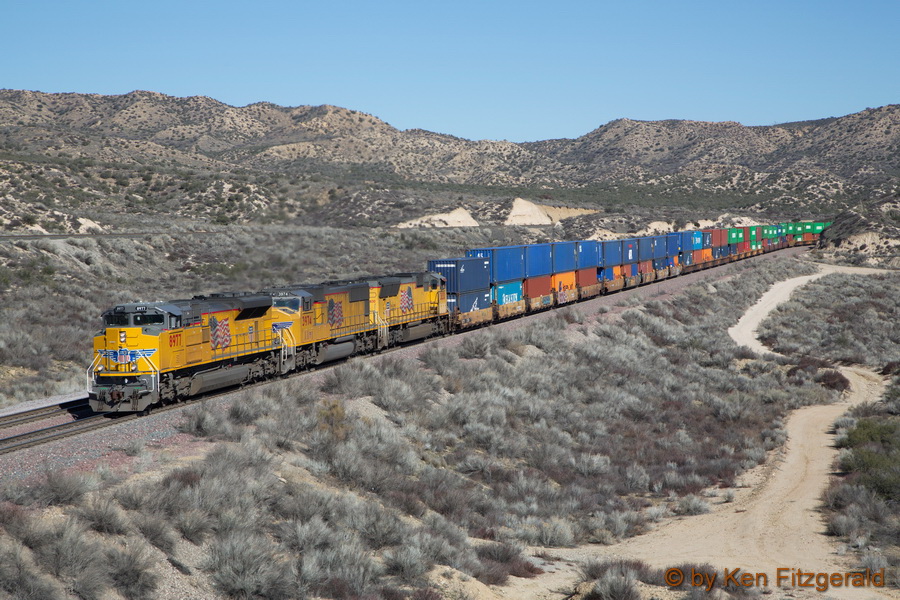 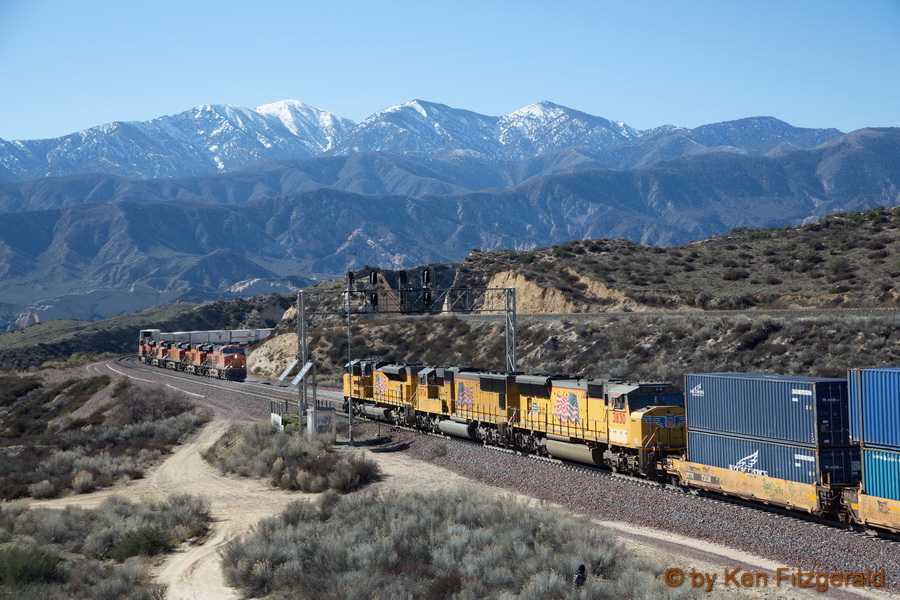 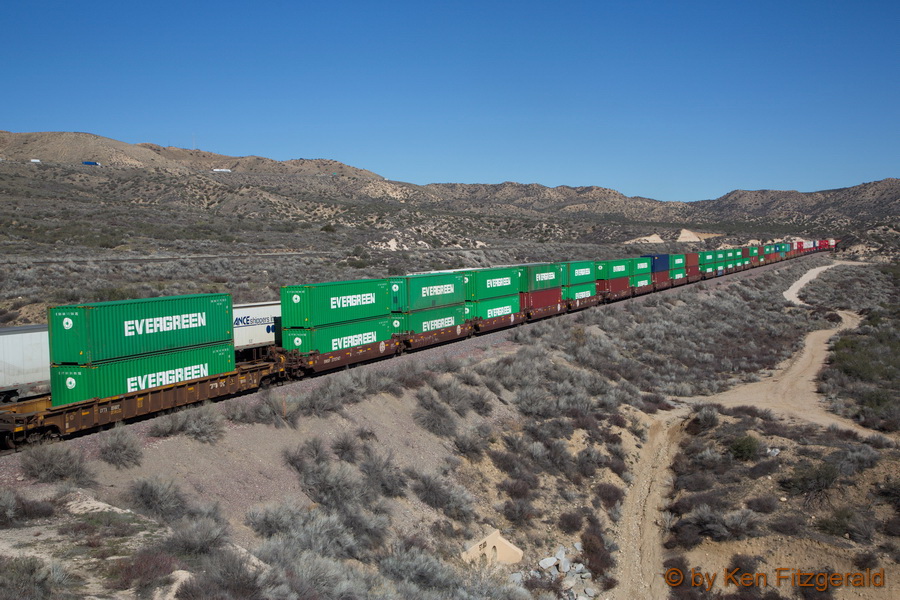 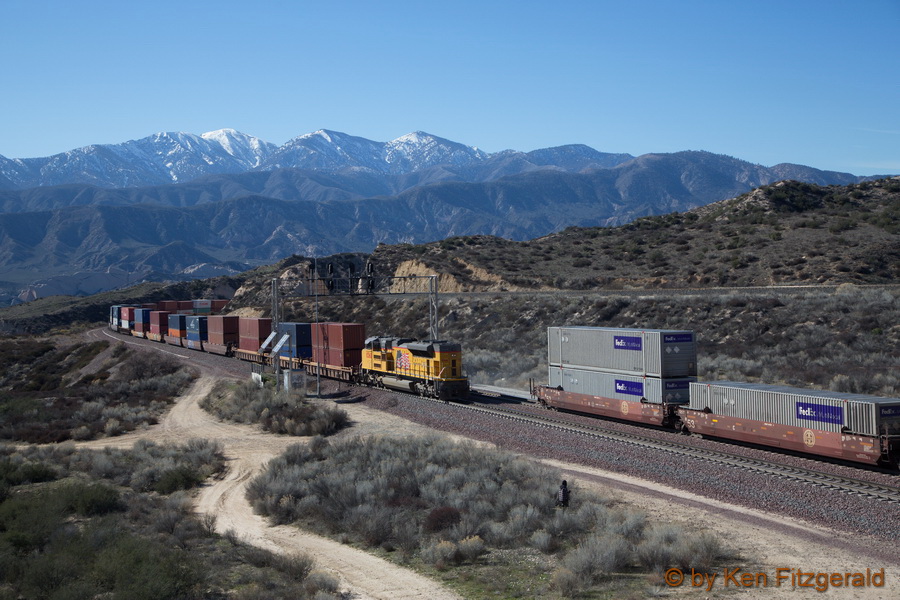 After a brief interlude giving time to enjoy the benches, a BNSF intermodal train is seen winding down Main Two with full dynamic brakes whining on both ends. 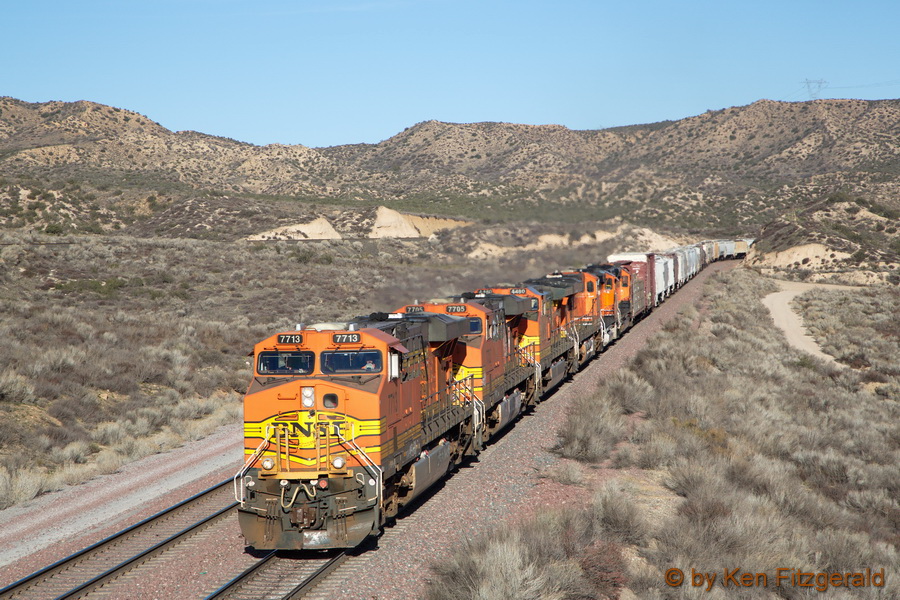 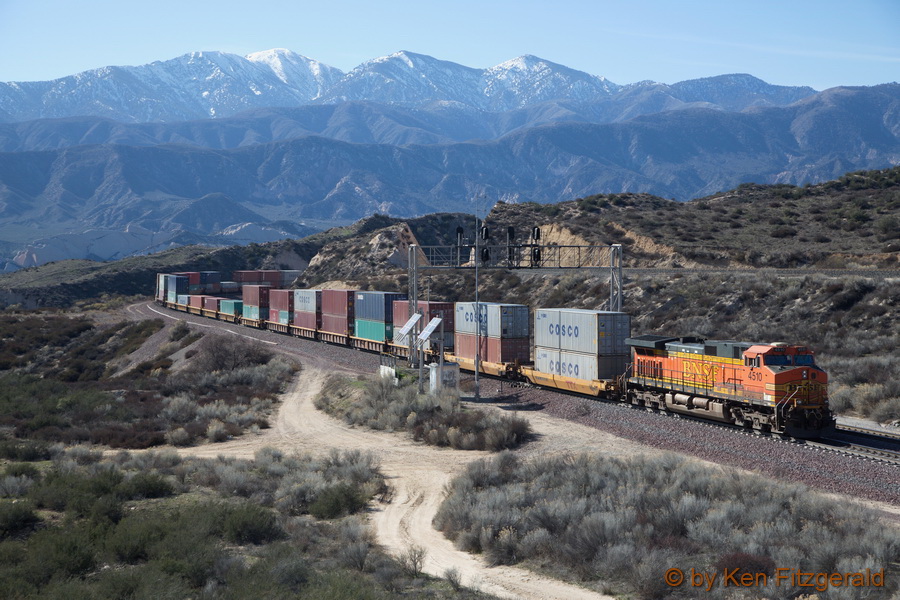 A few minutes later the eastbound Barstow local roars up the hill with a long train and two older GP60 units in its power consist, one of them a red warbonnet wide cab. 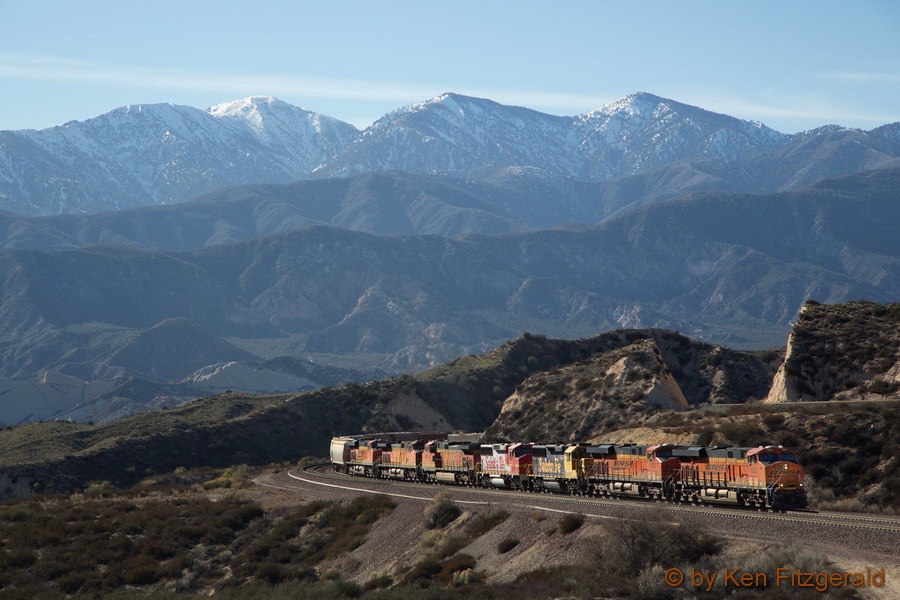 Looking back east to Silverwood as the local grinds past in the background, we finally get to see a westbound UP intermodal that has the proper braking versus tonnage ratio to allow it to tackle the almost 3% grade on Main Three between Silverwood and Cajon. 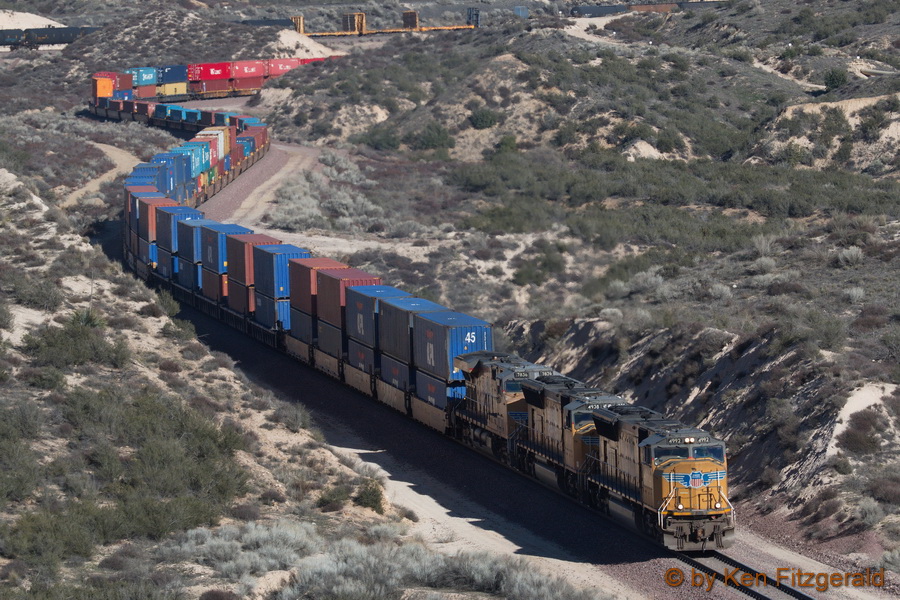 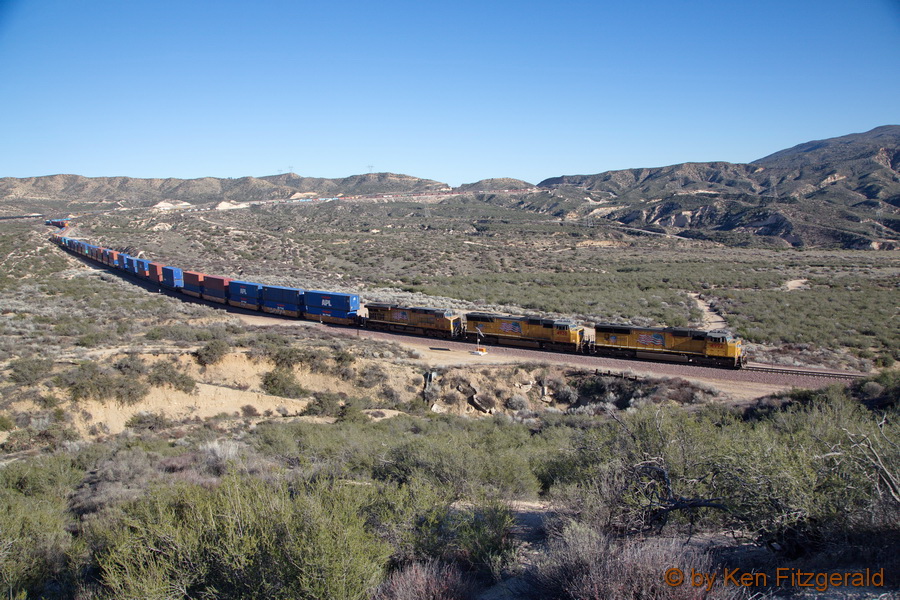 Our last train of the day before packing it in was an eastbound UP charging up through the deep cuts of the Palmdale Cutoff on the hillside above Mains One and Two. 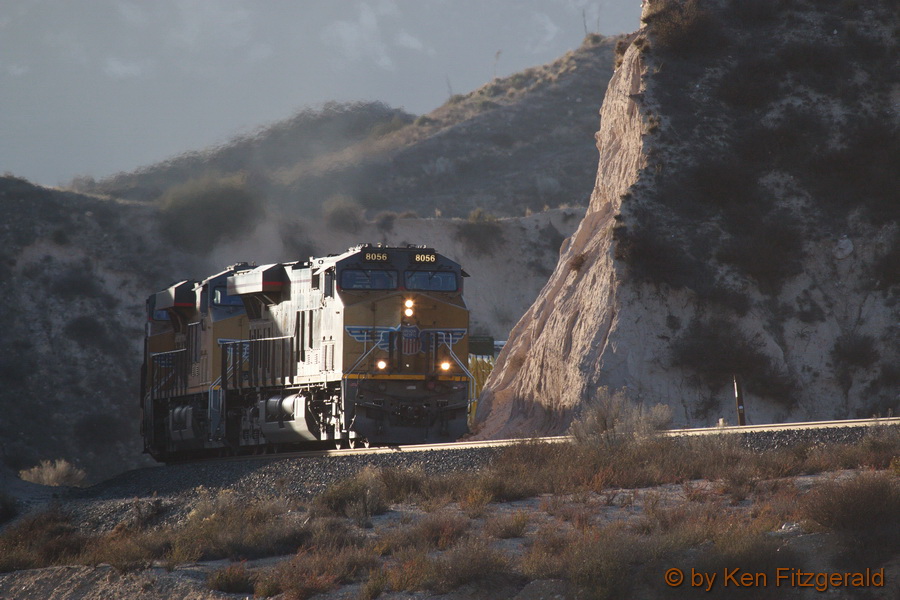 In the next installment we will spend two hours in Riverside California the following morning before I had to head on to the airport for my flight back to DFW.

UP 1979’s First Trip to Texas in Freight Service