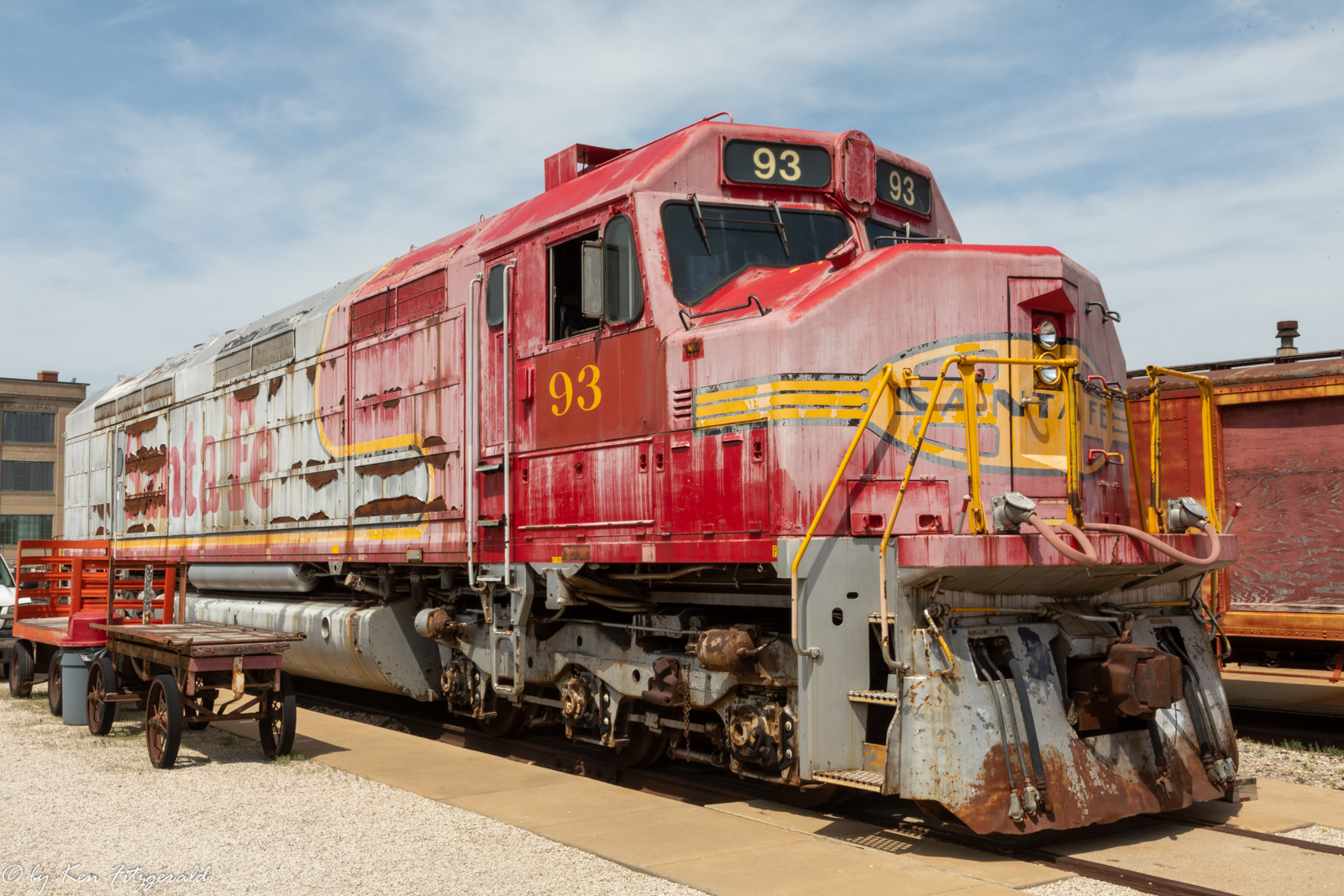 Or to be more specific, El Dorado, Kansas to perform a photo assignment for a client. I left home around 7:30 am heading north and made my first stop at Davis, Oklahoma on BNSF’s Red Rock Sub where I had about ten minutes to spare when I caught Amtrak’s southbound Heartland Flyer. First, I took a moment to capture the BNSF 5672 which was shut down in one of the spur tracks.

The Heartland Flyer literally flew by at 9:49 am.

On the radio I heard a local was switching in Wynnewood and would be meeting a southbound Willow Springs to Alliance “Z” train there. I drove up Highway 77 which had not changed much in the past fifty years and was pleasantly surprised to see the local was powered by a pair of old GE’s still in warbonnet paint. I first caught the southbound “Z” train at 10:19 am.

I got into position for the northbound local going to Pauls Valley and captured this sequence a few minutes later when the pair of well weathered red and silver units accelerating out of the siding. Usually, I just encounter these now as single units, so it was great to catch a pair of them together.

I got back on I 35 North and made my next rest stop in Perry, Oklahoma where the BNSF Avard Sub briefly parallels the Red Rock Sub. At 1:02 pm a westbound “Z” train came by on the Avard Sub heading to California with a CSX leader. The Red Rock Sub main and siding are in the foreground.

Twelve minutes later at 1:14 another southbound Willow Spring s to Alliance “Z” train passed the old Santa Fe depot at Perry. Too bad I was not able to get the two trains racing each other through town.

Now it was back to I 35 North with the goal of getting to Wichita, Kansas as soon as possible. The Great Plains Transportation Museum was open this Sunday afternoon from 1:00pm to 4:00pm and it had been too many years since my last visit. I arrived at 2:50 pm and first caught a northbound train at the south end of the old station complex with a UP and BNSF combo up front.

I parked and paid my entrance fee before climbing the stairs to the elevated platform area. I first made my way to the stairs leading to the cab of Santa Fe 4-8-4 Northern number 3768. With the high contrast between the relative darkness of the cab and the bright sun outside, I decided to set my Canon 5D Mark IV camera to take a High Dynamic Resolution (HDR) sequence and then combine them into one photo. Here is the result after minor adjustments in Lightroom.

I could hear another northbound train blowing for crossings south of the elevated right-of-way carrying BNSF, UP and Watco trains through town. I reset my camera back to normal (or at least so I thought) and took this view from 3768’s cab at 3:04 pm. When I reviewed it in the viewfinder, I could see a ghost of the lead unit number ahead of the real number. I realized that my camera was still in HDR mode and had taken and combined a sequence of photos. While noticeable, I decided it was keeper for now since the shadow-side of the train lighting turned out pretty well.

I climbed down and spent the next hour visiting with the volunteer staff and viewing the equipment of display.

The museum is accepting donations with the goal of cosmetically restoring ex-Santa Fe FP45 number 93. I will have to look for some of my photos of it in service from years gone by.

The staff graciously opened the south gate so I could photograph one more northbound BNSF train passing the old passenger platform before leaving.

I drove about two miles to Wichita South Junction where BNSF, UP and Watco lines come together to operate over the double track elevated section through downtown. In a few minutes I caught a northbound BNSF through the junction. The first signal in the foreground controls Watco’s Kansas & Oklahoma railroad, the middle signal controls the UP’s Enid Subdivision, and the far signal in front of the train controls the BNSF Arkansas City Subdivision.

For now, the BNSF operates the most trains through here in the form of northbounds that exit the Transcon at Mulvane, Kansas and run north through Wichita to Newton where the turn east to Ellinor where they get back on the Transcon. Westbound trains predominate on the Emporia Sub from Ellinor southwest through the Flint Hills passing Ellinor and Augusta on the way to Mulvane. Once the current BNSF project to double track the Emporia Sub between Mulvane south of Wichita and Ellinor west of Emporia is completed the number of BNSF trains taking this route through Wichita will diminish.

After this photo I drove southwest to the shop and offices for the Kansas & Oklahoma railroad. I took these two photos from the side of a city street.

It was great to see the ex-UP Southern Pacific SD40 survivor along with a fully repainted ex-Canadian National GP40-2LW. Driving back past Wichita South Junction I spotted another northbound headlight on the BNSF and paused for this last train of the day at 5:18 pm.

Now it was time to head east to El Dorado for dinner and a stay at the Holiday Inn Express.

Tuesday With A Friend