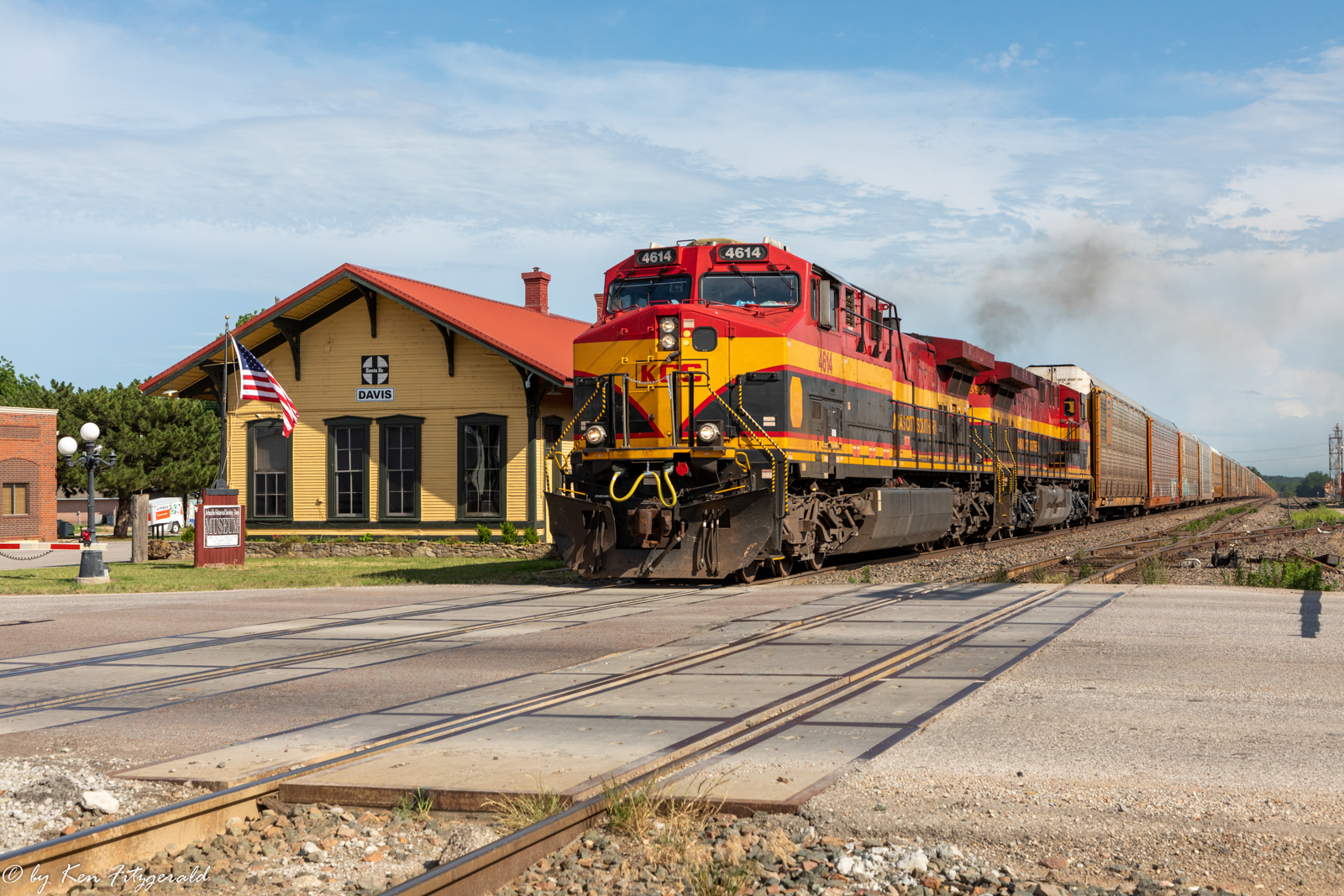 Wednesday June 1st was my day to drive from El Dorado back home to Aledo. It had rained all night, and there were many flood warnings issued for southern Kansas. Checking the radar there was a thick line of storms heading northeast from southern Oklahoma towards my path home if I took I35 back south from Wichita. I opted instead to head due south out of El Dorado, preferring to stick to the less busy two-lane roads while driving in the rain.

My first stop was in Augusta where the Douglas Sub south to Winfield parted from the Emporia Sub to Wellington. At 8:30 am I captured this view of a loaded grain train heading to Wellington. The rain had started again by the time the DPU rolled by.

A reminder of the past history here rested south of the depot as a storage unit.

At 8:47 am the connection to the Douglas Sub was polished by a southbound Willow Springs to Alliance “Z” train.

I thought I was well ahead of the train when I arrived in Douglas, but then the crossing started up and I barely had time to hop out of the car for this grab shot.

Shortly after I took this photo the dispatcher told this train to slow down for a flash flood warning the rest of the way to Winfield, so I was able to get ahead with enough time to photograph three South Kansas & Oklahoma units at rest.

The “Z” train caught up to me and I paced it out of town. I heard the dispatcher tell the “Z” train they would meet a northbound “Q” train at Hackney just north of Arkansas City. I set up on an overpass just south of Hackney and caught the northbound at 10:05 am.

Before long the southbound “Z” came into view around the curve with a warbonnet for the trailing unit.

“Z” trains run in a long crew pool from Kansas City to Oklahoma City, so it got ahead of me quickly at Arkansas City and beat me to Ponca City with no problem. I stopped in town to see that times have been hard for both the old Santa Fe depot and the adjacent Robin Hood Flour complex.

Although presently unoccupied, the old Rock Island depot at the end of the long-abandoned branch from Enid to Ponca City appears to be in pretty good shape.

There is not much left of the old freight house.

At the south end of town, I sheltered under my umbrella for this northbound 1 x 1 powered merchandise train.

The rain picked up from here on south through Stillwater and did not let up until I reached Shawnee and stopped for a late lunch. Afterwards I checked on the Arkansas & Oklahoma but found out their power was in Oklahoma City this day, so I settled for a photo of the old Santa Fe “castle” depot.

I continued due south and cut back over towards I35 in the Davis area. I stopped at the depot for a few minutes to see if anything would pass by. I was surprised to hear on the radio that the southbound “Z” I had chased earlier was approaching Wynnewood to meet a northbound. My luck was bad in that the northbound I had missed here in Davis by about 20 minutes was led by an ex-ATSF warbonnet. There was no time to drive north to Wynnewood before it would leave, so I held my location in Davis and set up for the southbound “Z passing the depot at 4:48 pm.

I was able to capture the other side of the warbonnet I had last photographed in Hackney, Kansas.

You could consider it a foreign power consolation prize as I heard the “Z” would be meeting another northbound at Dougherty that had a KCS unit leading. This was worth waiting for and I took these photos at 5:20 pm of not just one, but a pair of KCS units for power on a vehicle train.

I fueled up here and headed south on I35. I thought about ending the trip as I started it, with a photo of the Heartland Flyer. I checked the timing and figured I could make it to Gainesville a few minutes ahead of the station stop. When I got to Gainesville there was great deal of construction on the interstate, and I managed to miss the temporary exit.

Now with some concern I took the next exit which was a mile south of town and headed east on dirt roads towards the track using the Explorer’s built-in map display. I made it to a remote grade crossing with what ended up being less than five minutes to spare. I was ready when the Flyer came by milepost 407 at 6:24 pm.

I remembered catching a Santa Fe freight train here over 40 years ago, so now I will have to look for that photo. Overall, this trip was a success and I made it home before 8:00 pm.

A Cold and Rainy Day at the Stockyards