One to two inches of snow was forecast in our local area on Friday the 27th, and as I did not have any assignments I decided to spend the morning on the UP Baird Sub near the house.  The snow started to fall at the house a little after 8:00am, and I drove towards Aledo intending to set up there and let trains come to me.  Road conditions deteriorated quickly as snow packed on the roads and I reached the end of a line of cars stretching out of sight about a mile out of town.  Someone was obviously having trouble ahead, so I turned around and went instead to the west switch at Iona.

I only had to wait about ten minutes when at 9:06am the westbound Abilene local (“79 local” on the radio) with two EMD GP60’s up front came sweeping around the curve. 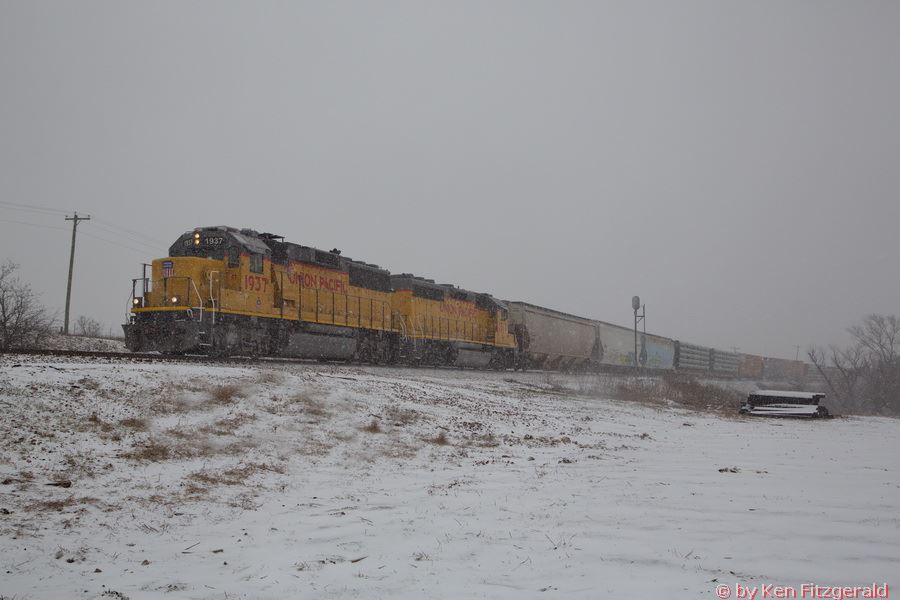 After the local passed through Aledo a few minutes later, the crew got on the radio to the dispatcher and reported the two grade crossings were blocked by stopped vehicles in a line of traffic and they had slowed down to allow cars to clear when the gates came down (Rule #1 to drivers: Do not stop on the tracks!).  The dispatcher immediately called the UP 8631 West which at that moment was passing my location. 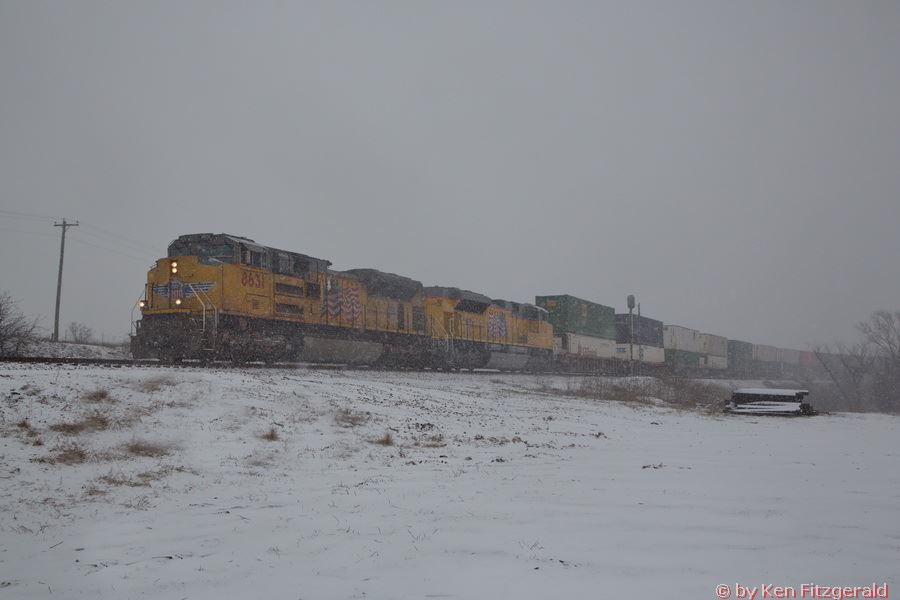 The dispatcher told the train to stop immediately until the local authorities could clear up the situation ahead.  The front of the train stopped behind one of my favorite houses about 1/4 mile west. 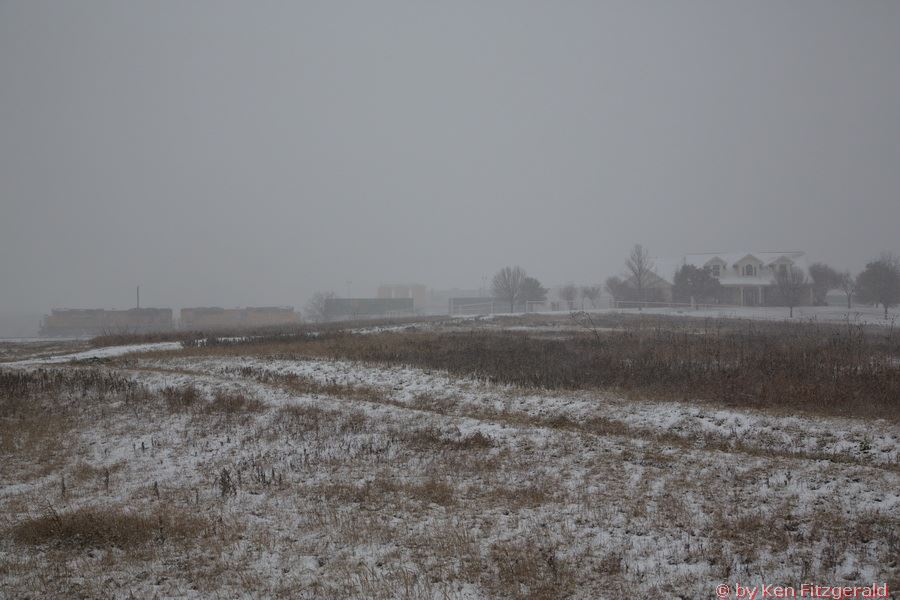 Years ago this house was built on the south side of the Baird Sub with the track practically in the back yard.  The owners may have been railfans and I would have loved to live there too, but apparently the straw that broke the camel’s back was the construction of a huge natural gas compressor station directly across the tracks from the house.  You can see the outline of some of the structures behind the first stack cars.  I heard there was a lawsuit, the result of which the gas company bought the house and it has remained empty ever since.  In the photo above I am parked outside the padlocked gate. 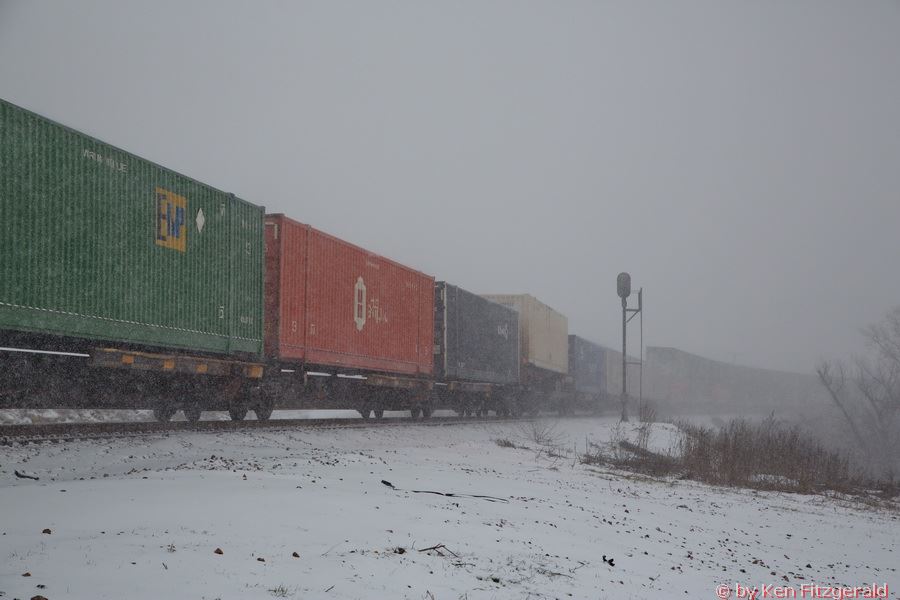 Moments later the two DPU’s rolled by in dynamic braking mode.  Note the old T&P now abandoned concrete signal house to the left of the brand new UP steel model recently placed when the new Positive Train Control antenna visible on the tower was installed. 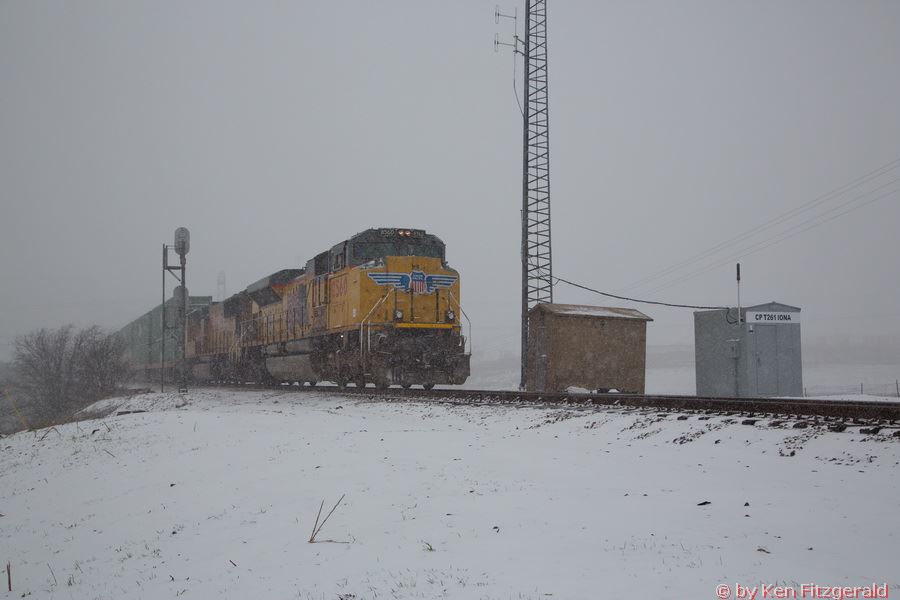 At 10:25am the UP 7279 West started to pull out of the siding with an ex-SP unit trailing and what looked to be a unit sand train in tow. 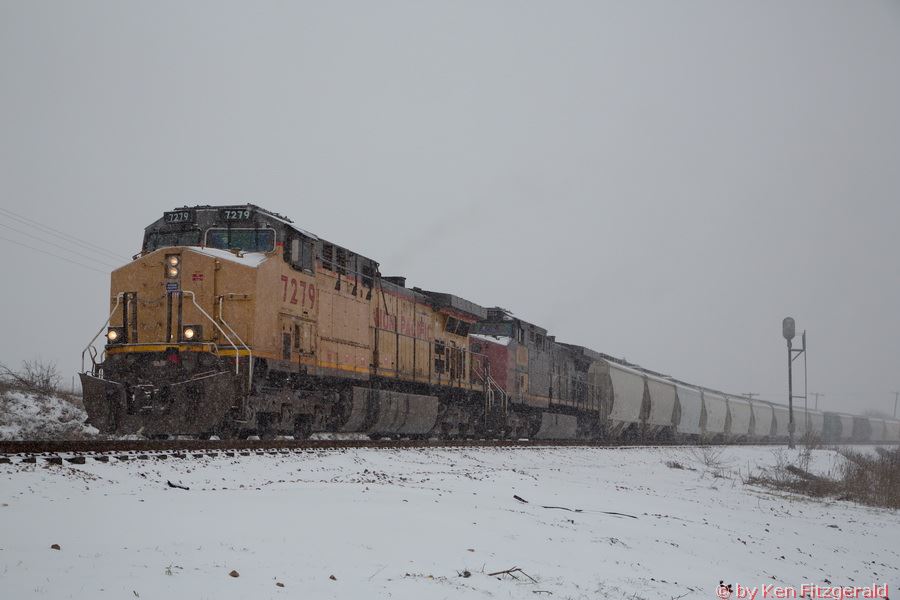 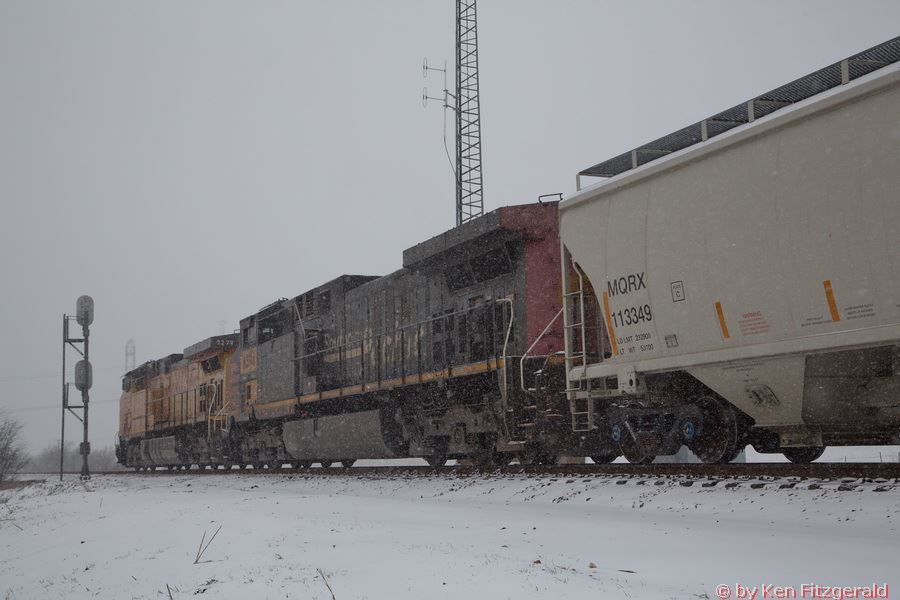 When the DPU rolled by I took both a normal view and a telephoto of the UP 6623 retreating into the storm. 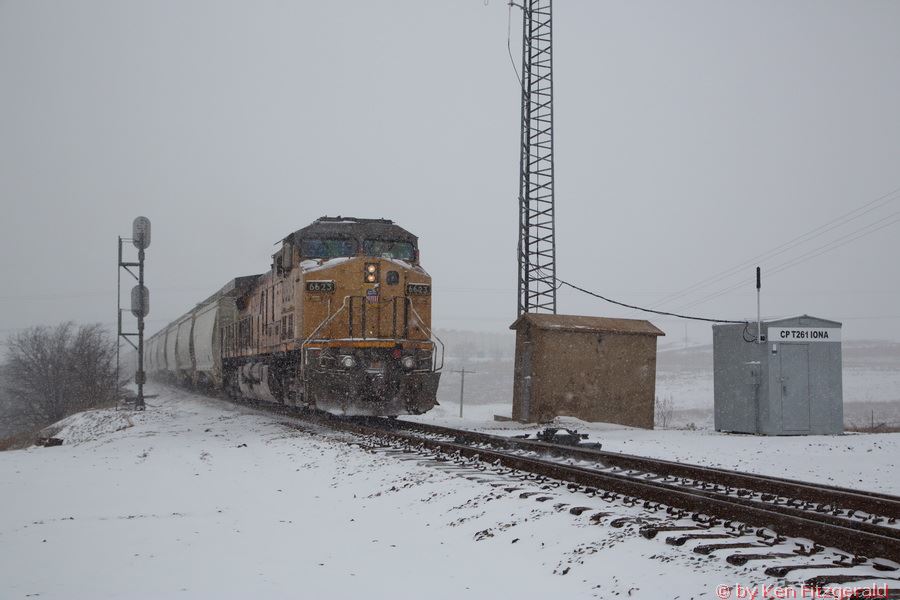 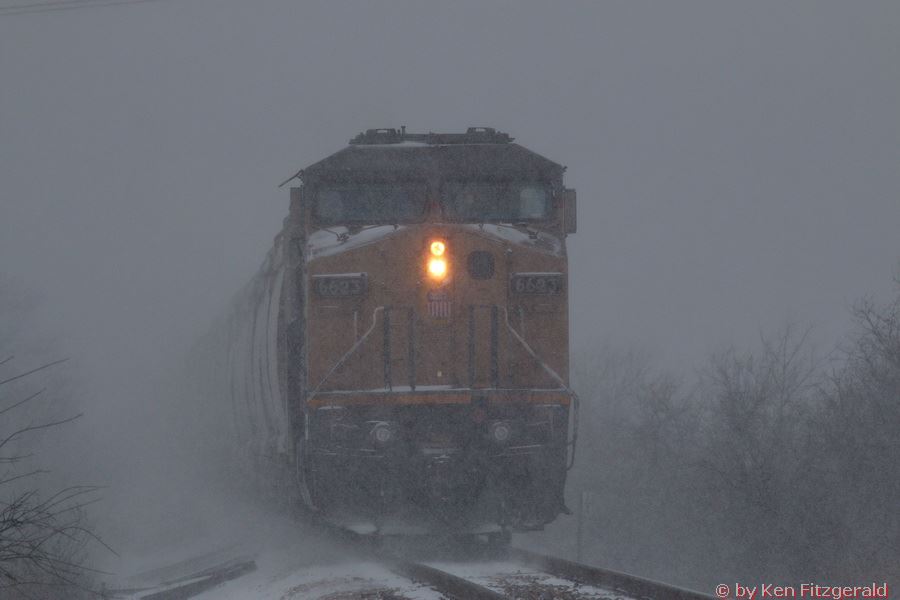 Listening to the radio it sounded like that it would be while before any more west bounds left Fort Worth and the next train would be an eastbound presently somewhere west of Weatherford.  I decided to try to drive into Aledo again and wait there for further developments.  While I encountered several cars in the ditch on the way everyone seemed to have adequate help.  I made it all the way into Aledo this time, and while I was starting to get hungry now that it was after 11:00am, all the local restaurants were closed.  Luckily I had brought adequate water and snacks along with kitty liter and a shovel.  I caught up on my reading while I waited by the old T&P Iona depot stored behind city hall.

I kept an eye on the eastbound signal located up by the FM 1187 crossing, and at 11:40am it lit up green meaning there was an eastbound train three miles away at the next signal to the west. Before long I heard a beautiful K5HL horn blowing for the quarry crossing at the bottom of the eastbound grade, and at 11:46am the 7929 East came charging up the hill into Aledo. 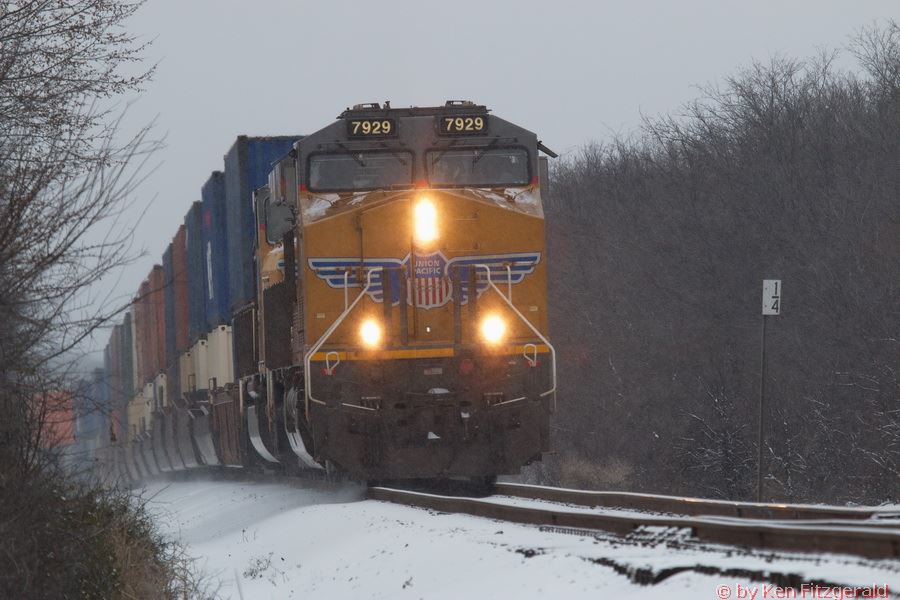 After the locomotives passed I turned with them and caught a last moment shot of the green signal leading this intermodal train to Fort Worth. 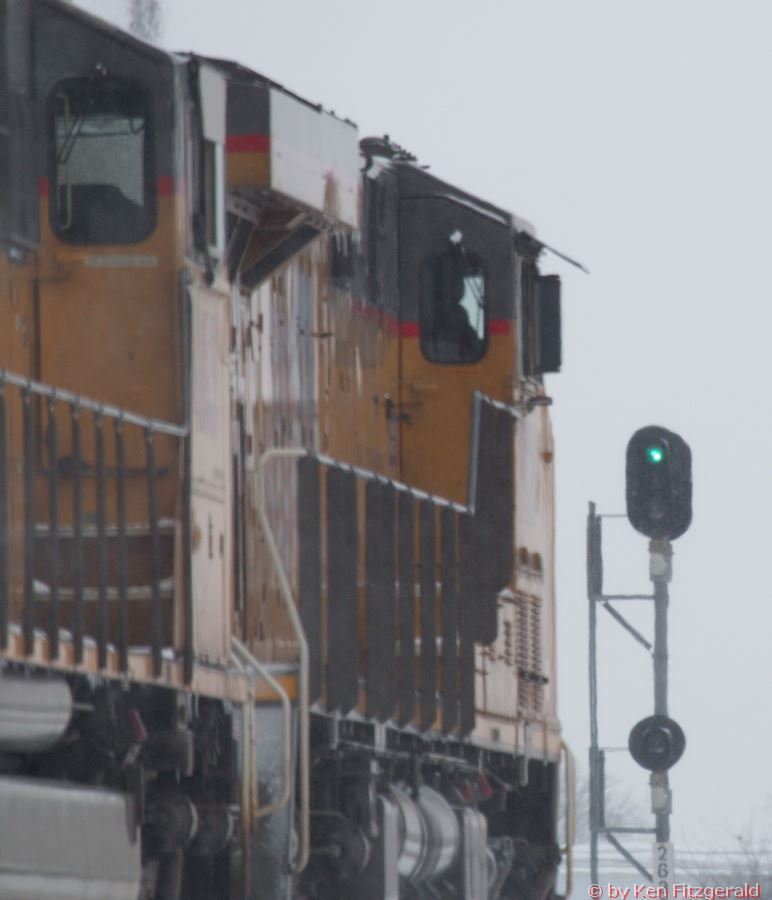 A solid string of double stack cars dutifully followed along. 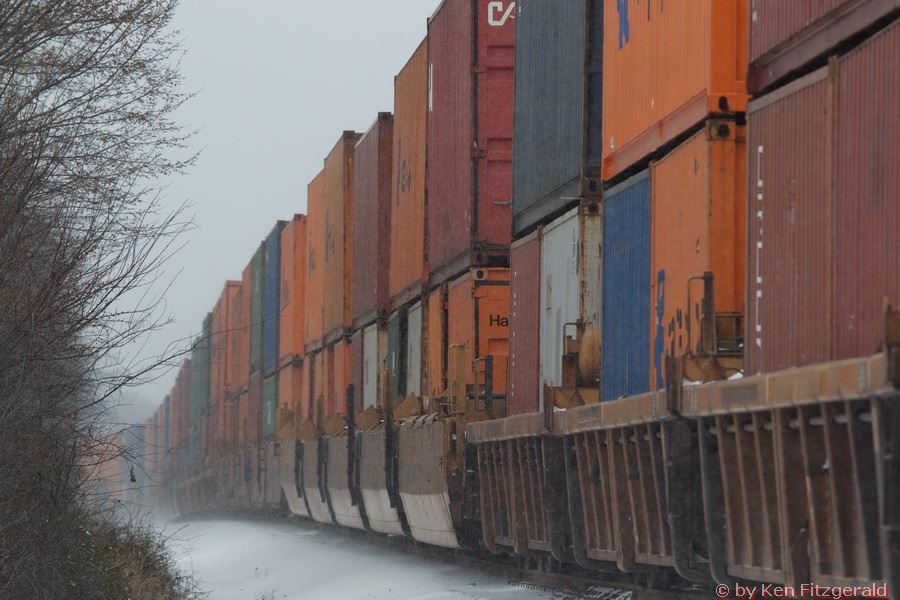 It took four minutes for the train to pass and I captured the UP 8403 in DPU mode shoving towards the ultimate crest of the grade in the middle of the siding at Iona. 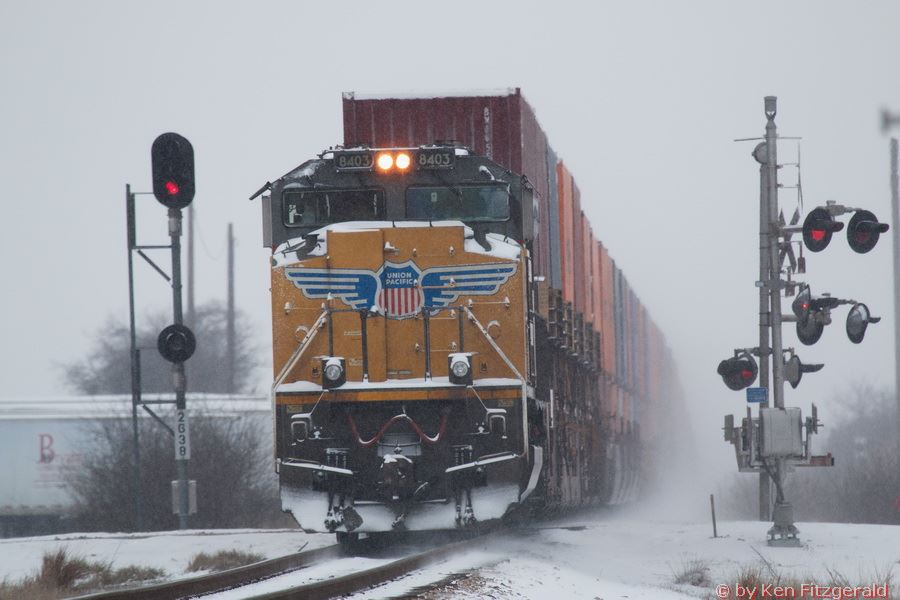 The radio indicated there were not any other trains close by, so I decided to call it quits on the UP with a count of four in the snow.